Osaka, Japan – Hydrogen is essential to the modern economy, and expanding its utility in a more sustainable society is a major global priority. Now, in a study recently published in Science Advances, researchers from Osaka University have made exciting progress toward eliminating many of the remaining bottlenecks in using hydrogen as an energy carrier. 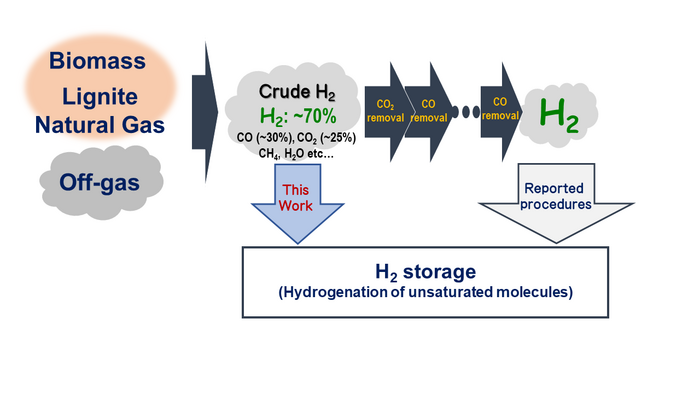 Osaka, Japan – Hydrogen is essential to the modern economy, and expanding its utility in a more sustainable society is a major global priority. Now, in a study recently published in Science Advances, researchers from Osaka University have made exciting progress toward eliminating many of the remaining bottlenecks in using hydrogen as an energy carrier.

As a chemical precursor to the ammonia that’s used in fertilizer production, hydrogen has helped feed the world and, in the future, hydrogen may continue to save lives by also serving as a fuel. A major obstacle to this goal is how we currently produce hydrogen. There are many methods for producing hydrogen—such as by reacting high-temperature steam with natural gas—but these approaches result in the production of crude hydrogen, which contains contaminant gases that are difficult to remove, decreasing the value of the resulting hydrogen. For the commercial use of hydrogen, all contaminants must be rigorously removed by multistep, energy-intensive processes that are independently optimized for each contaminant, making it difficult to extract the hydrogen from the crude mixture containing the by-products.

The difficulty of extracting hydrogen from common contaminant gases has restricted the utility of liquid organic hydrogen carriers, the state-of-the-art for hydrogen storage. In these systems, many researchers have struggled for decades to overcome the challenge of inducing the carriers to uptake—i.e., store—hydrogen in the presence of contaminant gases. For example, “even a small amount of carbon monoxide can hinder hydrogen uptake,” says Yoichi Hoshimoto, the corresponding author. “Thus, costly purification methods to isolate the hydrogen prior to storage are necessary.”

To overcome these challenges, Hoshimoto and his team have synthesized shelf-stable triaryl boranes that took up hydrogen even in the presence of common contaminant gases, achieving the following ground-breaking results: hydrogen storage (with up to >99% efficiency) and subsequent hydrogen release at a purity of up to 99.9%.

“The industrial value of molecular hydrogen has long been plagued by substantial quantities of carbon monoxide and other contaminants,” explains Hoshimoto. “However, in the catalytic hydrogenation method we developed, even a five-fold excess of a contaminant wasn’t a problem, and hydrogen uptake and release were each achieved without using any solvents.”

This work succeeded in a proof-of-concept for a novel hydrogen production method that eliminates the need for separate purification stages prior to storage, and it thus demonstrates the potential to increase the economic sustainability of hydrogen as an energy carrier. Future advances in increasing the environmental sustainability of hydrogen production—such as by obtaining it from water—will further help bring about a sustainable hydrogen-based economy.

The article, “Main-group catalysis for H2 purification based on liquid organic hydrogen carriers,” will be published in Science Advances at DOI: https://doi.org/10.1126/sciadv.ade0189