One dose of an anti-parasite drug was just as effective as two at significantly reducing the spread of scabies, the contagious, intensely itchy skin condition, according to a new study. 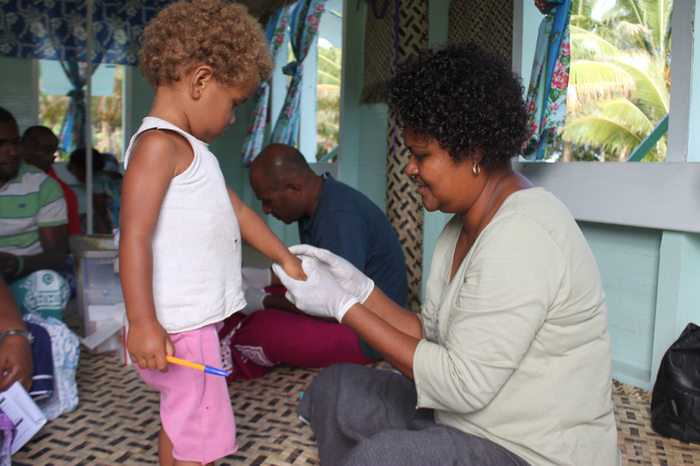 One dose of an anti-parasite drug was just as effective as two at significantly reducing the spread of scabies, the contagious, intensely itchy skin condition, according to a new study.

The research, led by the Murdoch Children’s Research Institute (MCRI) in collaboration with Fiji Ministry of Health and Medical Services and the Kirby Institute at the University of New South Wales, found the mass drug administration of one-dose of ivermectin was not inferior to two-doses, taken a week apart, for reducing scabies prevalence in Fiji.

Published in PLOS Medicine, the study paves the way for a cost-effective and efficient one-dose strategy for scabies control in countries where the disease is endemic, improving children’s and families’ quality of life and reducing the burden of disease. This would replace the two-dose strategy recently endorsed by the World Health Organization.

A ‘screen-and-treat’ approach using a cream medication, permethrin, was also found to be effective in reducing scabies among participants and their households.

Scabies is a neglected tropical disease, with high infection rates in many Pacific nations, parts of South America and Africa, and in remote Australian Indigenous communities. Globally, there are about 455 million new cases of scabies every year.

The constant scratching caused by the mites leads to the skin infection impetigo, which can lead to rheumatic heart disease and chronic kidney failure if Strep A bacteria enters the wound.

Lead Fijian researcher Dr Josaia Samuela said, “Scabies and impetigo are common in Fiji, affecting 20 per cent of the population at any one time, and up to half of our children. Research into how to tackle scabies is important for Fiji and many Pacific countries.”

MCRI Dr Myra Hardy said this was an important study designed to determine if community wide treatment with one dose of ivermectin could substantially reduce both burden and transmission of scabies.

MCRI Professor Andrew Steer said while two doses of ivermectin had already proven to be successful at reducing community prevalence of scabies, a one-dose strategy would have substantial advantages.

“Ivermectin can’t kill mites’ eggs, therefore a second dose seven to 14 days after the first (when eggs have hatched) is recommended and has been the standard for mass drug administration protocols,” he said. “But a second dose increases the cost, duration, burden on the community, and is more challenging to integrate with other neglected tropical disease mass drug administration programs, which are all one-dose.”

Kirby Institute Professor John Kaldor said despite a screen-and-treat approach also being effective, the strategy was impractical to implement as a large-scale public health strategy.

“A screen-and-treat approach is labour-intensive, requiring a large workforce of highly skilled clinical examiners to screen an entire population,” he said. “Now that we have this evidence that a one-dose strategy performs well in small island settings, we need to see how well it performs in larger populations.”

WHO collaborating centres are institutions which are designated by the Director-General to carry out activities in support of the organisation’s programs.

MCRI and its partners are also leading a global program aiming to equip low- and middle-income countries with the tools and the resources to detect, monitor and control scabies in affected communities.

The World Scabies Program was established in 2019 after securing a $10 million grant from the Macquarie Group’s 50th anniversary philanthropic commitment to address social need.
Researchers from the Burnet Institute, Case Western Reserve University and Veterans Affairs Medical Center in Cleveland, Washington University in St Louis and McGill University in Montreal also contributed to the study.