One Biodiversity Knowledge Hub to link them all: the BiCIKL project 2nd General Assembly

The Horizon 2020 – funded project BiCIKL has reached its halfway stage and the partners gathered in Plovdiv (Bulgaria) from the 22nd to the 25th of October for the Second General Assembly, organised by Pensoft. 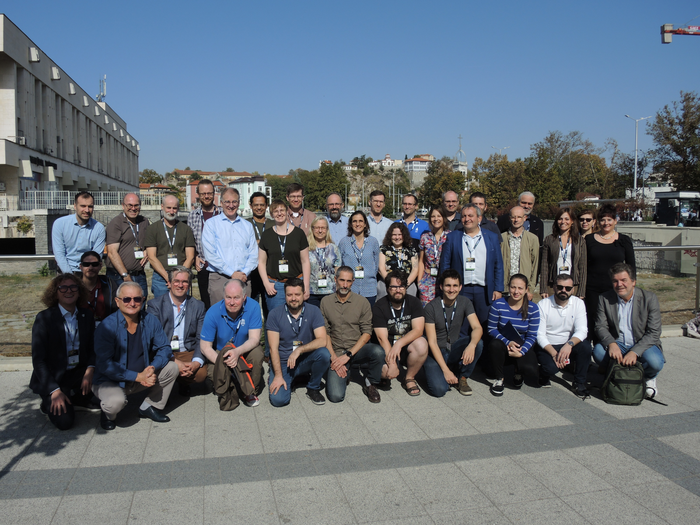 The Horizon 2020 – funded project BiCIKL has reached its halfway stage and the partners gathered in Plovdiv (Bulgaria) from the 22nd to the 25th of October for the Second General Assembly, organised by Pensoft.

The BiCIKL project will launch a new European community of key research infrastructures, researchers, citizen scientists and other stakeholders in the biodiversity and life sciences based on open science practices through access to data, tools and services.

BiCIKL’s goal is to create a centralised place to connect all key biodiversity data by interlinking 15 research infrastructures and their databases. The 3-year European Commission-supported initiative kicked off in 2021 and involves 14 key natural history institutions from 10 European countries.

BiCIKL is keeping pace as expected with 16 out of the 48 final deliverables already submitted, another 9 currently in progress/under review and due in a few days. Meanwhile, 21 out of the 48 milestones have been successfully achieved.

The hybrid format of the meeting enabled a wider range of participants, which resulted in robust discussions on the next steps of the project, such as the implementation of additional technical features of the FAIR Data Place (FAIR being an abbreviation for Findable, Accessible, Interoperable and Reusable).

This FAIR Data Place online platform – the key and final product of the partnership and the BiCIKL initiative – is meant to provide scientists with all types of biodiversity data “at their fingertips”.

This data includes biodiversity information, such as detailed images, DNA, physiology and past studies concerning a specific species and its ‘relatives’, to name a few. Currently, the issue is that all those types of biodiversity data have so far been scattered across various databases, which in turn have been missing meaningful and efficient interconnectedness.

Additionally, the FAIR Data Place, developed within the BiCIKL project, is to give researchers access to plenty of training modules to guide them through the different services.

Halfway through the duration of BiCIKL, the project is at a turning point, where crucial discussions between the partners are playing a central role in the refinement of the FAIR Data Place design. Most importantly, they are tasked with ensuring that their technologies work efficiently with each other, in order to seamlessly exchange, update and share the biodiversity data every one of them is collecting and taking care of.

By Year 3 of the BiCIKL project, the partners agree, when those infrastructures and databases become efficiently interconnected to each other, scientists studying the Earth’s biodiversity across the world will be in a much better position to build on existing research and improve the way and the pace at which nature is being explored and understood. At the end of the day, knowledge is the stepping stone for the preservation of biodiversity and humankind itself.

“Needless to say, it’s an honour and a pleasure to be the coordinator of such an amazing team spanning as many as 14 partnering natural history and biodiversity research institutions from across Europe, but also involving many global long-year collaborators and their infrastructures, such as Wikidata, GBIF, TDWG, Catalogue of Life to name a few,”
said BiCIKL’s project coordinator Prof. Lyubomir Penev, CEO and founder of Pensoft.

“I see our meeting in Plovdiv as a practical demonstration of our eagerness and commitment to tackle the long-standing and technically complex challenge of breaking down the silos in the biodiversity data domain. It is time to start building freeways between all biodiversity data, across (digital) space, time and data types. After the last three days that we spent together in inspirational and productive discussions, I am as confident as ever that we are close to providing scientists with much more straightforward routes to not only generate more biodiversity data, but also build on the already existing knowledge to form new hypotheses and information ready to use by decision- and policy-makers. One cannot stress enough how important the role of biodiversity data is in preserving life on Earth. These data are indeed the groundwork for all that we know about the natural world,” he added.

“The point is: do we want an integrated structure or do we prefer federated structures? What are the pros and cons of the two options? It’s essential to keep the community united and allied because we can’t afford any information loss and the stakeholders should feel at home with the Project and the Biodiversity Knowledge Hub.”

“We are a brand new community, and we are in the middle of the growth process. We would like to already have answers, but it’s good to have this kind of robust discussion to build on a good basis. We must find the best solution to have linkages between infrastructures and be able to maintain them in the future because the Biodiversity Knowledge Hub is the location to gather the community around best practices, data and guidelines on how to use the BiCIKL services… In order to engage even more partners to fill the eventual gaps in our knowledge.”

“BiCIKL is leading data infrastructure communities through some exciting and important developments,”

“In an era of biodiversity change and loss, leveraging scientific data fully will allow the world to catalogue what we have now, to track and understand how things are changing and to build the tools that we will use to conserve or remediate. The challenge is that the data come from many streams – molecular biology, taxonomy, natural history collections, biodiversity observation – that need to be connected and intersected to allow scientists and others to ask real questions about the data. In its first year, BiCIKL has made some key advances to rise to this challenge,” he added.

“As a partner, we, at the Biodiversity Information Standards – TDWG, are very enthusiastic that our standards are implemented in BiCIKL and serve to link biodiversity data. We know that joining forces and working together is crucial to building efficient infrastructures and sharing knowledge.”

The project will go on with the first Round Table of experts in December and the publications of the projects who participated in the Open Call and will be founded at the beginning of the next year.

Learn more about BiCIKL on the project’s website at: bicikl-project.eu