Older than expected: Teeth reveal the origin of the tiger shark 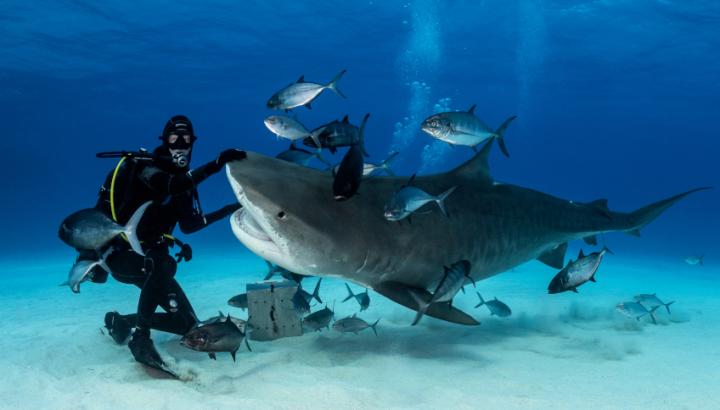 The tiger shark is one of the largest predatory sharks known today. This shark is a cosmopolitan species occurring in all oceans worldwide. It is characterized by a striped pattern on its back, which is well marked in juveniles but usually fades in adults.

The fossil history of modern sharks reaches back to the Permian, about 295 million years ago. Complete fossil shark skeletons are very rare – the skeleton, which consists almost entirely of cartilage, is only preserved under very special circumstances during the fossilization processes. Due to the lifelong continuous tooth replacement, most extinct sharks are therefore only known by their well-mineralized teeth, which, nonetheless, can provide deep insights into their evolutionary history.

The teeth of the modern tiger shark are unique: they have a broad, double-serrated cutting edge which even allows them to cut through sea turtle shells with ease. Tiger shark teeth are known in the fossil record since about 56 million years. Based on these fossil teeth, over 22 extinct tiger shark species have been described.

An international team of researchers led by Julia Türtscher from the University of Vienna has now examined the fossil history of the tiger shark and its extinct relatives. With the help of geometric morphometrics, the scientists were able to show that only 5 of the 22 known fossil tiger sharks actually represent valid species. Nevertheless, tiger sharks were more diverse in the past and only a single species survived until today.

Another intriguing detail in the tiger shark fossil record emerged during this study. Up to now, it was assumed that the modern tiger shark originated ca. 5.3 million years ago. The team, however, was able to identify several 13.8 million year old fossil teeth as belonging to this shark demonstrating that it originated much earlier than previously assumed.