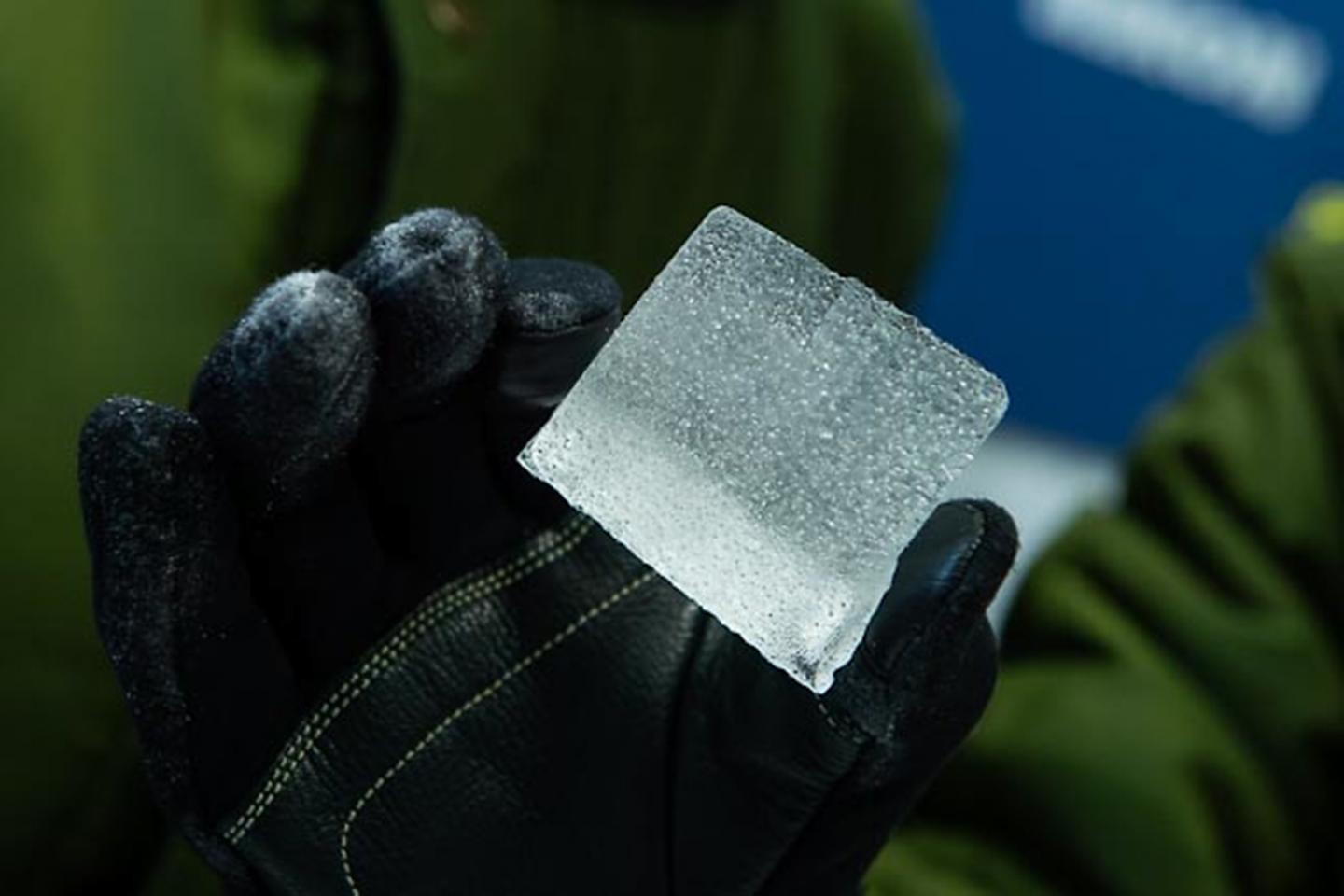 HOUSTON — (June 12, 2019) — Using rare oxygen molecules trapped in air bubbles in old ice and snow, U.S. and French scientists have answered a long-standing question: How much have “bad” ozone levels increased since the start of the Industrial Revolution?

“We’ve been able to track how much ozone there was in the ancient atmosphere,” said Rice University geochemist Laurence Yeung, the lead author of a study published online today in Nature. “This hasn’t been done before, and it’s remarkable that we can do it at all.”

Researchers used the new data in combination with state-of-the-art atmospheric chemistry models to establish that ozone levels in the lower atmosphere, or troposphere, have increased by an upper limit of 40% since 1850.

The Rice-led research team includes investigators from the University of Rochester in New York, the French National Center for Scientific Research’s (CNRS) Institute of Environmental Geosciences at Université Grenoble Alpes (UGA), CNRS’s Grenoble Images Speech Signal and Control Laboratory at UGA and the French Climate and Environmental Sciences Laboratory of both CNRS and the French Alternative Energies and Atomic Energy Commission (CEA) at the Université Versailles-St Quentin.

“These measurements constrain the amount of warming caused by anthropogenic ozone,” Yeung said. For example, he said the most recent report from the Intergovernmental Panel on Climate Change (IPCC) estimated that ozone in Earth’s lower atmosphere today is contributing 0.4 watts per square meter of radiative forcing to the planet’s climate, but the margin of error for that prediction was 50%, or 0.2 watts per square meter.

“It’s like guessing how heavy your suitcase is when there’s a fee for bags over 50 pounds,” he said. “With the old error bars, you’d be saying, ‘I think my bag is between 20 and 60 pounds.’ That’s not good enough if you can’t afford to pay the penalty.”

Ozone is a molecule that contains three oxygen atoms. Produced in chemical reactions involving sunlight, it is highly reactive, in part because of its tendency to give up one of its atoms to form a more stable oxygen molecule. The majority of Earth’s ozone is in the stratosphere, which is more than five miles above the planet’s surface. Stratospheric ozone is sometimes called “good” ozone because it blocks most of the sun’s ultraviolet radiation, and is thus essential for life on Earth.

The rest of Earth’s ozone lies in the troposphere, closer to the surface. Here, ozone’s reactivity can be harmful to plants, animals and people. That’s why tropospheric ozone is sometimes called “bad” ozone. For example, ozone is a primary component of urban smog, which forms near ground level in sunlit-driven reactions between oxygen and pollutants from motor vehicle exhaust. The Environmental Protection Agency considers exposure to ozone levels greater than 70 parts per billion for eight hours or longer to be unhealthy.

“The thing about ozone is that scientists have only been studying it in detail for a few decades,” said Yeung, an assistant professor of Earth, environmental and planetary sciences. “We didn’t know why ozone was so abundant in air pollution until the 1970s. That’s when we started to recognize how air pollution was changing atmospheric chemistry. Cars were driving up ground-level ozone.”

While the earliest measurements of tropospheric ozone date to the late 19th century, Yeung said those data conflict with the best estimates from today’s state-of-the-art atmospheric chemistry models.

“Most of those older data are from starch-paper tests where the paper changes colors after reacting with ozone,” he said. “The tests are not the most reliable — the color change depends on relative humidity, for example — but they suggest, nevertheless, that ground-level ozone could have increased up to 300% over the past century. In contrast, today’s best computer models suggest a more moderate increase of 25-50%. That’s a huge difference.

“There’s just no other data out there, so it’s hard to know which is right, or if both are right and those particular measurements are not a good benchmark for the whole troposphere,” Yeung said. “The community has struggled with this question for a long time. We wanted to find new data that could make headway on this unsolved problem.”

Finding new data, however, is not straightforward. “Ozone is too reactive, by itself, to be preserved in ice or snow,” he said. “So, we look for ozone’s wake, the traces it leaves behind in oxygen molecules.

“When the sun is shining, ozone and oxygen molecules are constantly being made and broken in the atmosphere by the same chemistry,” Yeung said. “Our work over the past several years has found a naturally occurring ‘tag’ for that chemistry: the number of rare isotopes that are clumped together.”

Yeung’s lab specializes in both measuring and explaining the occurrence of these clumped isotopes in the atmosphere. They are molecules that have the usual number of atoms — two for molecular oxygen — but they have rare isotopes of those atoms substituted in place of the common ones. For example, more than 99.5% of all oxygen atoms in nature have eight protons and eight neutrons, for a total atomic mass number of 16. Only two of every 1,000 oxygen atoms are the heavier isotope oxygen-18, which contains two additional neutrons. A pair of these oxygen-18 atoms is called an isotope clump.

The vast majority of oxygen molecules in any air sample will contain two oxygen-16s. A few rare exceptions will contain one of the rare oxygen-18 atoms, and rarer still will be the pairs of oxygen-18s.

With the onset of industrialization and the burning of fossil fuels around 1850, humans began adding more ozone to the lower atmosphere. Yeung and colleagues reasoned that this increase in the proportion of tropospheric ozone should have left a recognizable trace — a decrease in the number of oxygen-18 pairs in the troposphere.

Using ice cores and firn (compressed snow that has not yet formed ice) from Antarctica and Greenland, the researchers constructed a record of oxygen-18 pairs in molecular oxygen from preindustrial times to the present. The evidence confirmed both the increase in tropospheric ozone and the magnitude of the increase that had been predicted by recent atmospheric models.

“We constrain the increase to less than 40%, and the most comprehensive chemical model predicts right around 30%,” Yeung said.

“One of the most exciting aspects was how well the ice-core record matched model predictions,” he said. “This was a case where we made a measurement, and independently, a model produced something that was in very close agreement with the experimental evidence. I think it shows how far atmospheric and climate scientists have come in being able to accurately predict how humans are changing Earth’s atmosphere — particularly its chemistry.”

Study co-authors include Asmita Banerjee and Huanting Hu, both of Rice; Lee Murray of the University of Rochester; Patricia Martinerie, Jérôme Chappellaz and Emmanuel Witrant, all of CNRS and Université Grenoble Alpes; and Anaïs Orsi from CEA at the Laboratoire des Sciences du Climat et de l’Environnement. This research was supported by the David and Lucile Packard Foundation, the European Research Council, CNRS and the French Polar Institute IPEV.

CAPTION: Rice University researchers and collaborators used ice cores, like the one shown here from Antarctica, in combination with atmospheric chemistry models to establish an upper limit for the increase in ozone levels in the lower atmosphere since 1850. (Photo by Jeff Fitlow/Rice University)

CAPTION: Rice University geochemists Laurence Yeung and Asmita Banerjee studied the increase in tropospheric ozone from preindustrial time to present by constructing a record of oxygen-18 “clumped isotope” pairs from tiny bubbles of atmospheric gas that were trapped in ice and snow in Antarctica and Greenland. (Photo by Jeff Fitlow/Rice University)