An important East Coast shellfish industry is projected to suffer revenue losses as offshore wind energy develops along the U.S. Northeast and Mid-Atlantic coasts, according to two Rutgers studies. 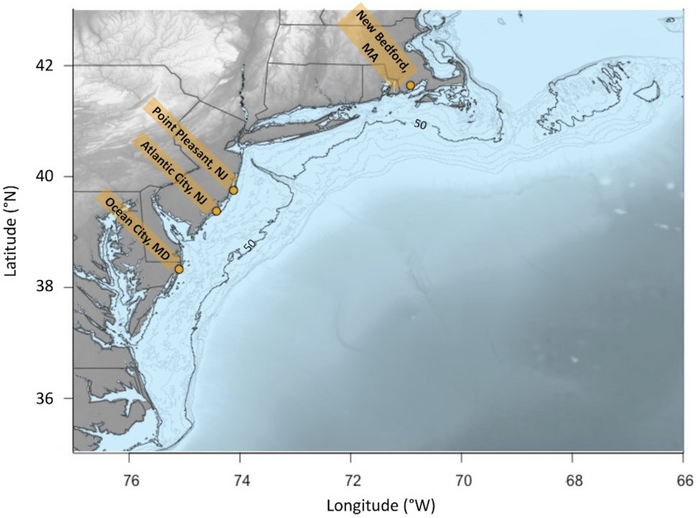 Credit: © The Author(s) 2022. Published by Oxford University Press on behalf of International Council for the Exploration of the Sea.

An important East Coast shellfish industry is projected to suffer revenue losses as offshore wind energy develops along the U.S. Northeast and Mid-Atlantic coasts, according to two Rutgers studies.

The studies, which appear in the ICES Journal of Marine Science (here and here), examined how offshore wind farms planned for the eastern United States could disrupt fishing of the Atlantic surfclam, a major economic driver from Virginia to Massachusetts that generates more than $30 million in direct annual revenue. Total fleet revenue declines measured by the studies ranged from 3 percent to 15 percent, depending on the scale of offshore wind development and response of the fishing fleet.

In New Jersey, losses could be as high as 25 percent for fishing vessels based in Atlantic City.

“Understanding the impacts of fishery exclusion and fishing effort displacement from development of offshore wind energy is critical to the sustainability of the Atlantic surfclam fishing industry,” said co-author Daphne Munroe, an associate professor in the Department of Marine and Coastal Sciences in the School of Environmental and Biological Sciences.

“Tools that can predict and manage these complex and interconnected challenges are essential for developing and evaluating strategies that allow for multiple users of the offshore environment.”

“SEFES is basically a virtual world that allows us to simulate the dynamics of the fishery – from how captains navigate their boats to how weather impacts the catch,” Munroe said. “But the model also has a layer of biology, which accounts for the clam populations and how they change over time and in space.” For instance, climate change is already pushing clam distribution northward; SEFES can account for this shift.

To fine tune SEFES, Munroe and colleagues worked closely with the industry, including fishermen who provided valuable feedback. “We showed them how the model was working, and they told us if our assessments were right or wrong.” Input from fisheries managers and data from landings were also used to ensure the model was working well.

With the model calibrated, Munroe’s team then sought to predict the impacts of future wind farms on Atlantic surfclam catches. As of 2021, some 1.7 million acres of ocean have been leased for offshore renewable energy projects on the outer continental shelf. Atlantic surfclam vessels that fish these areas must operate within restricted lanes or in ways that may be less efficient than in unrestricted areas.

These changes to fishing behavior will have costs that SEFES can calculate. “If fishermen can’t fish in wind-leased areas, they will fish elsewhere in locations that might be less than optimal, changes that will mean longer trips and potentially smaller hauls,” said Munroe.

The studies, funded by the U.S. Bureau of Ocean Energy Management, also determined the locations of the most vulnerable fleets and associated processors. Topping the list are fleets based in Atlantic City. The least affected port in the simulations was New Bedford, Mass.