Octopuses appear to deliberately throw debris, sometimes directed at other octopuses, according to a study publishing November 9 in the open-access journal PLOS ONE led by Peter Godfrey-Smith at the University of Sydney and colleagues. 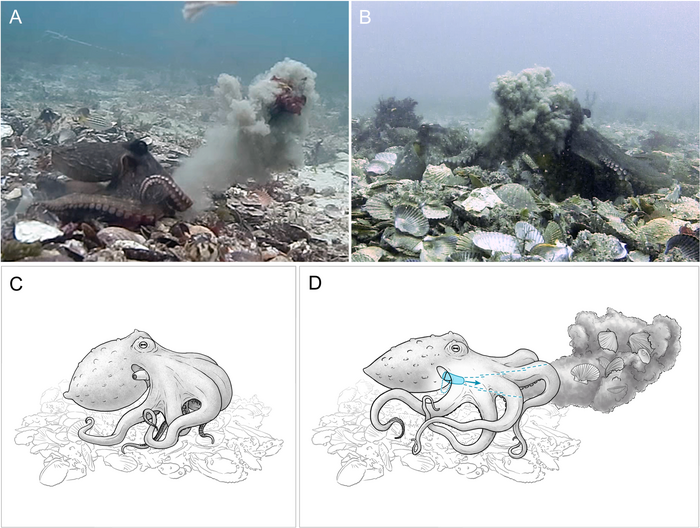 Octopuses appear to deliberately throw debris, sometimes directed at other octopuses, according to a study publishing November 9 in the open-access journal PLOS ONE led by Peter Godfrey-Smith at the University of Sydney and colleagues.

Researchers recorded the behavior of gloomy octopuses (Octopus tetricus) in Jervis Bay, Australia in 2015 and 2016 using underwater video cameras. They analyzed 24 hours of footage across several days and identified 102 instances of debris throwing in a group of roughly 10 octopuses, although individual identification was not always possible.

Octopuses gathered material such as silt or shells, and released it while using a jet of water from their siphon (a tube-shaped structure that can eject water at speed) to propel it between their arms and through the water, often throwing material several body lengths away. To perform the throws, octopuses had to move their siphon into an unusual position, suggesting the behavior was deliberate. Both sexes were observed throwing, but 66% of throws were performed by females. Around half of throws occurred during or around the time of interactions with other octopuses, such as arm probes or mating attempts, and about 17% of throws hit other octopuses. Octopuses can change their skin coloration, with dark colors generally associated with aggression, and the researchers found that dark-colored individuals tended to throw more forcefully and were more likely to hit another octopus. Octopuses hit by thrown material often altered their behavior by ducking or raising their arms in the direction of the thrower.

This is the first time that throwing behavior has been reported in octopuses. The authors say that although it is difficult to determine the intent of octopuses propelling debris through the water, the behaviors observed suggest that at least in some social contexts, octopuses are capable of targeted throws towards other individuals, a behavior that has only been observed previously in a few non-human animals.

The authors add: “Wild octopuses project various kinds of material through the water in jet-propelled ‘throws,’ and these throws sometimes hit other octopuses. There is some evidence that some of these throws that hit others are targeted, and play a social role.”

In your coverage please use this URL to provide access to the freely available article in PLOS ONE: https://journals.plos.org/plosone/article?id=10.1371/journal.pone.0276482

Funding: General financial support was provided to PGS by the City University of New York (https://www.cuny.edu) and to DS through Alaska Pacific University (https://www.alaskapacific.edu) from donations by the Pollock Conservation Consortium. The funders had no role in study design, data collection and analysis, decision to publish, or preparation of the manuscript.

In the line of fire: Debris throwing by wild octopuses