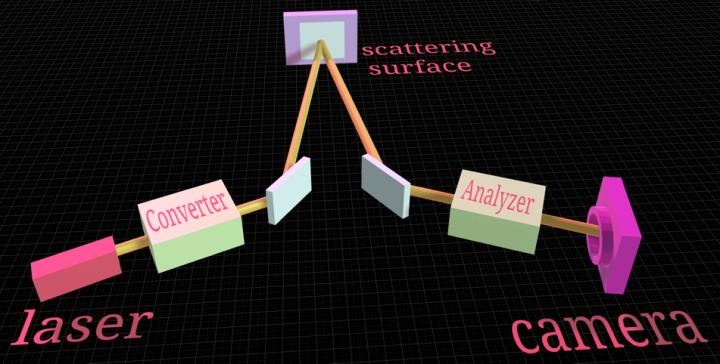 Quantum coherence is a key ingredient in many fundamental tests and applications of quantum technology including quantum communication, imaging, computing, sensing and metrology. However, the transfer of quantum coherence in free-space has so far been limited to direct line-of-sight channels as atmospheric turbulence and scattering degrade the quality of coherence severely.

In a new paper published in Light: Science & Applications, researchers from the University of Waterloo have successfully demonstrated the transfer and recovery of quantum coherence using photons scattered in free-space for the first time, enabling new research opportunities and applications in fields ranging from quantum communication to imaging and beyond.

“The ability to transfer quantum coherence via scattered photons means that now you can do many things that previously required direct line-of-sight free-space channels,” said Shihan Sajeed, lead author on the paper and a postdoctoral fellow at the Institute for Quantum Computing (IQC) and in the Department of Physics and Astronomy at the University of Waterloo in Ontario, Canada.

Normally, if you try to send and receive photons through the air (free-space) for quantum communication or any other quantum-encoded protocol, you need a direct line-of-sight between transmitter and receiver. Any objects–from as big as a wall to as small as a molecule–in the optical path will reflect some photons and scatter others, depending on how reflective the surface is. Any quantum information encoded in the photons is typically lost in the scattered photons, interrupting the quantum channel.

Together with Thomas Jennewein, principal investigator of the Quantum Photonics lab at IQC, Sajeed found a way to encode quantum coherence in pairs of photon pulses sent one after the other so that they would maintain their coherence even after scattering from a diffuse surface.

The researchers emitted a train of pulse pairs with a specific phase-coherence that could be measured from the scattered photons using quantum interference. They also used a single-photon-detector-array sensor that, in addition to solving wavefront distortions caused by atmospheric turbulence, acted as an imager thereby allowing to observe single-photon interference and imaging simultaneously. They placed the detector where they would only absorb scattered photons from the laser pulses, and observed a visibility of over 90%, meaning that the scattered photons maintained their quantum coherence even after smashing against an object.

Their novel technique required custom hardware to make use of the coherent light they were generating. The single photon detector array could detect one billion photons every second with a precision of 100 picoseconds. Only cutting-edge time-tagging electronics could handle the demands of this flow of light, and the team had to design their own electronics adapter board to communicate between the detectors and the computer that would process the data.

“Our technique can help image an object with quantum signals or transmit a quantum message in a noisy environment,” said Sajeed. “Scattered photons returning to our sensor will have a certain coherence, whereas noise in the environment will not, and so we can reject everything except the photons we originally sent.”

Sajeed expects their findings will stimulate new research and new applications in quantum sensing, communication, and imaging in free space environments. The duo demonstrated quantum communication and imaging in their paper, but Sajeed said further research is required to find out how their techniques could be used in various practical applications.

“We believe this could be used in quantum enhanced Lidar (Light Detection and Ranging), quantum sensing, non-line-of-sight imaging, and many other areas–the possibilities are endless,” said Sajeed.