Observation of a self-generated current to self-confine fusion plasmas

Nuclear fusion has drawn more attention in the era of carbon neutrality because of no carbon dioxide production during power generation and no generation of high-level radioactive wastes. 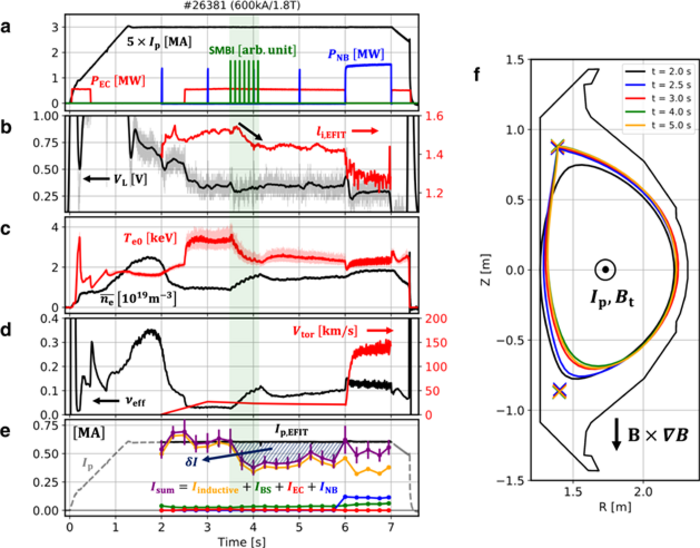 Nuclear fusion has drawn more attention in the era of carbon neutrality because of no carbon dioxide production during power generation and no generation of high-level radioactive wastes.

A tokamak, a torus-shaped nuclear fusion device, needs an electric current in the plasma to produce magnetic field around the torus for confining fusion plasmas. Plasma current is conventionally generated by electromagnetic induction.

However, for a steady-state fusion reactor, minimizing the inductive current is essential to extend the tokamak operating duration. Several non-inductive current drive schemes have been developed for steady-state operations such as radio-frequency waves and neutral beams. However, commercial reactors require minimal use of these external sources to maximize the fusion gain, Q, the ratio of the fusion power to the external power. Apart from these external current drives, a self-generated current, so-called bootstrap current, was predicted theoretically and demonstrated experimentally.

The research team led by Prof. Yong-Su Na in the Department of Nuclear Engineering at Seoul National University and Dr. Jaemin Seo at Princeton University have revealed that another type of self-generated current can exist in a tokamak which can not yet been explained by present theories. They discovered this in the experiments on the KSTAR tokamak in collaboration with Korea Institute of Fusion Energy, Princeton Plasma Physics Laboratory, and General Atomics.

While conducting an experiment on plasma turbulence, it was discovered by chance that an un-identified plasma current that could not be explained by existing theories and simulations occurred. As a result of the analysis, it was found that this comprises a significant amount up to 30% of the total plasma current, and appears when the turbulence was relatively low.

The discovery of a new plasma current generated by itself without magnetic induction shows a new possibility that the plasma confines by itself and continues the fusion reaction in long-pulse operations for a fusion reactor.

The new current source in this experiment was unusually observed only when the fuel was injected into the plasma and the exact cause is still unknown, so follow-up studies are planned to proceed actively in the future.

Prof. Yong-Su Na, the co-first author and corresponding author of the study, said, “This result was obtained from a unfamiliar experiment to the extent that the experiment proposal was not selected at KSTAR. If we had tried to look at it from a conventional point of view, we would not have found it. “We were able to discover new things by approaching with an open perspective rather than being confined to what we wanted to see or get.” Another co-first author, Dr. Seo Jae-min, said, “Big science such as the nuclear fusion research is being devoted to small steps that put an apple on the shoulders of giants. I hope that future scientists who can step forward together will be interested in and support the nuclear fusion research.”

Once the physics mechanism is found, this new discovery is expected to significantly contribute to the long continuous operation of ITER and commercial reactors, which are exploring current drive ways that do not reoly on inductive current.

Research Foundation of Korea (NRF) funded by the Korean government