A team of researchers from the National University of Singapore (NUS) have made a serendipitous scientific discovery that could potentially revolutionise the way water is broken down to release hydrogen gas – an element crucial to many industrial processes. 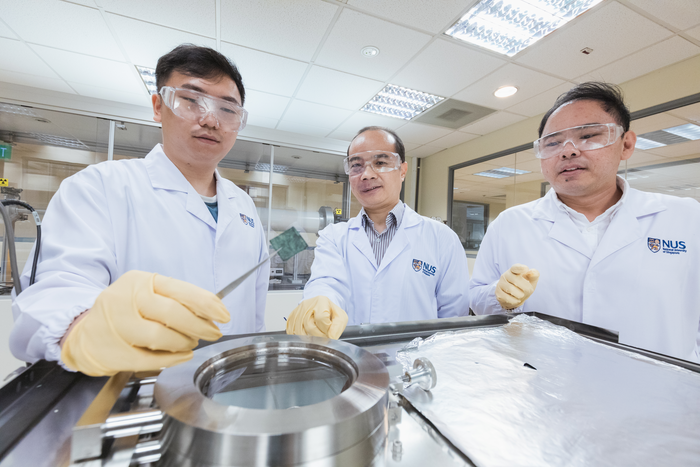 A team of researchers from the National University of Singapore (NUS) have made a serendipitous scientific discovery that could potentially revolutionise the way water is broken down to release hydrogen gas – an element crucial to many industrial processes.

The team, led by Associate Professor Xue Jun Min, Dr Wang Xiaopeng and Dr Vincent Lee Wee Siang from the Department of Materials Science and Engineering under the NUS College of Design and Engineering (NUS CDE), found that light can trigger a new mechanism in a catalytic material used extensively in water electrolysis, where water is broken down into hydrogen and oxygen. The result is a more energy-efficient method of obtaining hydrogen.

“We discovered that the redox center for electro-catalytic reaction is switched between metal and oxygen, triggered by light,” said Assoc Prof Xue. “This largely improves the water electrolysis efficiency.”

The new finding can potentially open up new and more effective industrial methods of producing hydrogen and putting this environmentally friendly source of fuel within the reach of more people and industries.

Assoc Prof Xue and his team detailed their discovery in a research paper published in renowned scientific journal Nature on 26 October 2022.

Under normal circumstances, Assoc Prof Xue and his team may not have been able to come across such a groundbreaking discovery. But an accidental power trip of the ceiling lights in his laboratory almost three years ago allowed them to observe something that the global scientific community has not yet managed to do.

Back then, the ceiling lights in Assoc Prof Xue’s research lab were usually turned on for 24 hours. One night in 2019, the lights went off due to a power trip. When the researchers returned the next day, they found that the performance of a nickel oxyhydroxide-based material in the water electrolysis experiment, which had continued in the dark, had fallen drastically.

“This drop in performance, nobody has ever noticed it before, because no one has ever done the experiment in the dark,” said Assoc Prof Xue. “Also, the literature says that such a material shouldn’t be sensitive to light; light should not have any effect on its properties.”

The electro-catalytic mechanism in water electrolysis is a very well-researched topic, while the nickel-based material is a very common catalytic material. Hence, in order to establish that they were on the verge of discovering something groundbreaking, Assoc Prof Xue and his team embarked on numerous repeated experiments. They dug deeper into the mechanics behind such a phenomenon. They even repeated the experiment outside of Singapore to ensure that their findings were consistent.

Three years on, Assoc Prof Xue and his team were finally able to share their findings publicly in a paper.

With their findings, the team is now working on designing a new way to improve industrial processes to generate hydrogen. Assoc Prof Xue is suggesting making the cells containing water to be transparent, so as to introduce light into the water splitting process.

“This should require less energy in the electrolysis process, and it should be much easier using natural light,” said Assoc Prof Xue. “More hydrogen can be produced in a shorter amount of time, with less energy consumed.”

Food companies use hydrogen gas to turn unsaturated oils and fats into saturated ones, which give us margarine and butter. Hydrogen is also used to weld metals together, as it can generate a high temperature of 4,000 deg C. The petroleum industry uses the gas to remove sulphur content from oil.

Moreover, hydrogen can potentially be used as a fuel. Long-touted as a sustainable fuel, hydrogen fuel produces no emissions as it burns upon reacting with oxygen — no ignition is needed, making it a cleaner and greener fuel source. It is also easier to store, making it more reliable than solar-powered batteries.

Assoc Prof Xue is glad that the findings from his team of researchers could contribute to scientific discovery. He thinks that the way to develop science is not to keep finding new ways to do what has already been done, but to constantly push the boundaries.

“It’s only through accumulation of new knowledge that we can improve society progressively,” said Assoc Prof Xue.