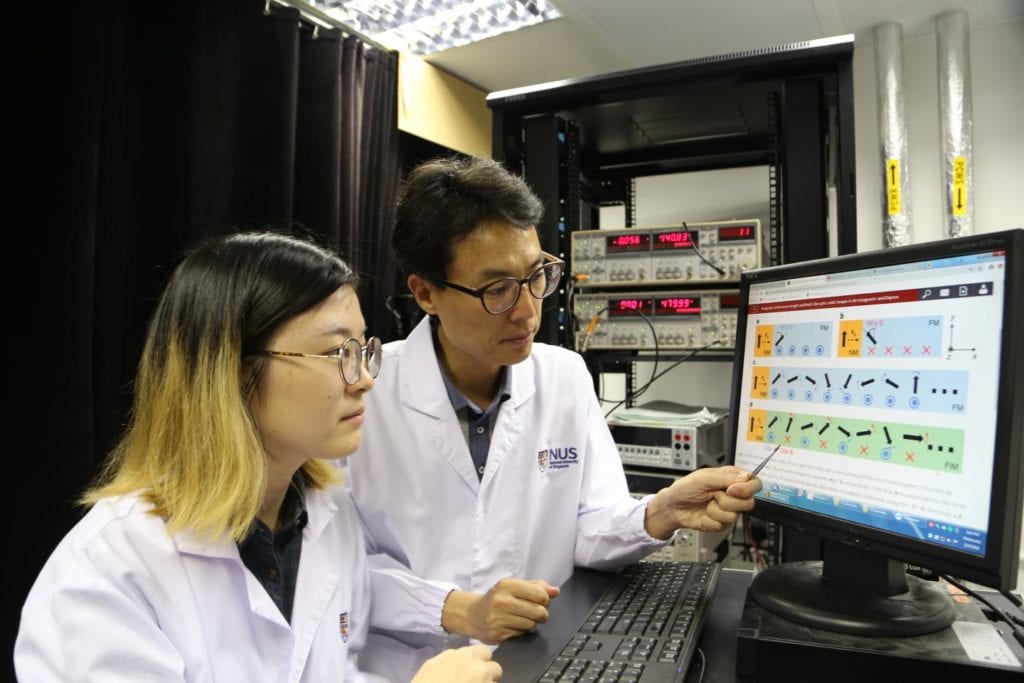 A team of international researchers led by engineers from the National University of Singapore (NUS) have invented a new magnetic device which is able to manipulate digital information 20 times more efficiently and with 10 times more stability than commercial spintronic digital memories. The novel spintronic memory device employs ferrimagnets and was developed in collaboration with researchers from Toyota Technological Institute, Nagoya, and Korea University, Seoul.

This breakthrough has the potential to accelerate the commercial growth of spin-based memory. “Our discovery could provide a new device platform to the spintronic industry, which at present struggles with issues around instability and scalability due to the thin magnetic elements that are used,” said Associate Professor Yang Hyunsoo from the NUS Department of Electrical and Computer Engineering, who spearheaded the project.

The invention of this novel spintronic memory was first reported in the journal Nature Materials on 3 December 2018.

Today, digital information is being generated in unprecedented amounts all over the world, and as such there is an increasing demand for low-cost, low-power, highly-stable, and highly-scalable memory and computing products. One way this is being achieved is with new spintronic materials, where digital data are stored in up or down magnetic states of tiny magnets. However, while existing spintronic memory products based on ferromagnets succeed in meeting some of these demands, they are still very costly due to scalability and stability issues.

“Ferromagnet-based memories cannot be grown beyond a few nanometres thick as their writing efficiency decays exponentially with increasing thickness. This thickness range is insufficient to ensure the stability of stored digital data against normal temperature variations,” explained Dr Yu Jiawei, who was involved in this project while pursuing her doctoral studies at NUS.

To address these challenges, the team fabricated a magnetic memory device using an interesting class of magnetic material – ferrimagnets. Crucially, it was discovered that ferrimagnetic materials can be grown 10 times thicker without compromising on the overall data writing efficiency.

“The spin of the current carrying electrons, which basically represents the data you want to write, experiences minimal resistance in ferrimagnets. Imagine the difference in efficiency when you drive your car on an eight lane highway compared to a narrow city lane. While a ferromagnet is like a city street for an electron’s spin, a ferrimagnet is a welcoming freeway where its spin or the underlying information can survive for a very long distance,” explained Mr Rahul Mishra, who was part of the research team and a current doctoral candidate with the group.

Using an electronic current, the NUS researchers were able to write information in a ferrimagnet memory element which was 10 times more stable and 20 times more efficient than a ferromagnet.

For this discovery, Assoc Prof Yang’s team took advantage of the unique atomic arrangement in a ferrimagnet. “In ferrimagnets, the neighbouring atomic magnets are opposite to each other. The disturbance caused by one atom to an incoming spin is compensated by the next one, and as a result information travels faster and further with less power. We hope that the computing and storage industry can take advantage of our invention to improve the performance and data retention capabilities of emerging spin memories,” said Assoc Prof Yang.

The NUS research team is now planning to look into the data writing and reading speed of their device. They expect that the distinctive atomic properties of their device will also result in its ultrafast performance. In addition, they are also planning to collaborate with industry partners to accelerate the commercial translation of their discovery.

$1.2 million in grants to fund search for diabetes cure

Genetic typing of a bacterium with biotechnological potential