New paper in Frontiers in Neural Circuits proposes a new way to understand how the neocortex works. Numenta’s “Thousand Brains Theory of Intelligence” offers significant implications for the fields of neuroscience and artificial intelligence 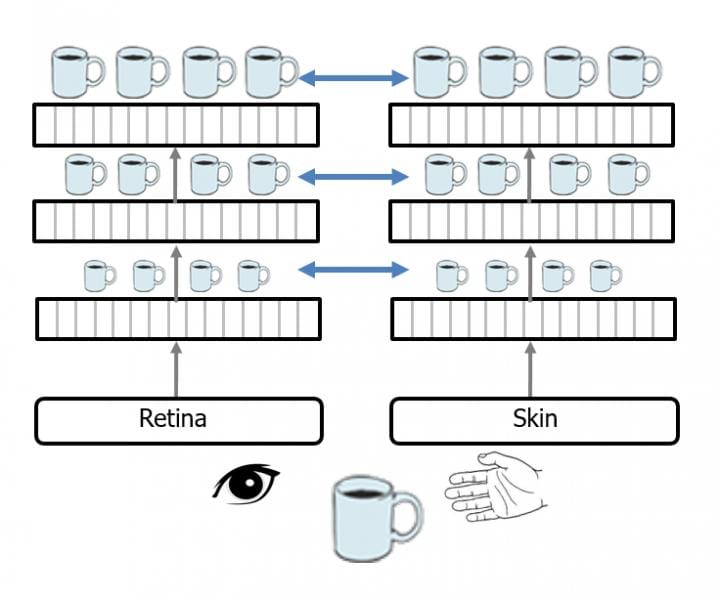 REDWOOD CITY, CA -January 14, 2019 – Scientists at Numenta propose a major new theory about how the human brain works. While neuroscientists have amassed an enormous amount of detailed factual knowledge about the brain, there remains no unifying theory as to what intelligence is and how the brain produces it. In their paper, “A Framework for Intelligence and Cortical Function Based on Grid Cells in the Neocortex,” Numenta researchers describe a broad framework for understanding what the neocortex does and how it works. The paper appears in the journal Frontiers in Neural Circuits.

The key insight described in the paper relates to a type of neuron called grid cells. Grid cells exist in an older part of the brain that learns maps of environments. As you move, grid cells keep track of the location of your body relative to these maps. Numenta researchers deduced that grid cells also must exist throughout the neocortex. These “cortical grid cells” track the locations of your sensors as they move relative to the objects in the world. The authors propose that cortical grid cells allow the neocortex to learn models of objects similar to how the older part of the brain learns maps of environments. The paper proposes how we learn the structure and behavior of objects based on locations and location spaces defined by cortical grid cells.

Numenta co-founder and lead author of the paper Jeff Hawkins commented, “The neocortex is composed of a repeating circuit that creates our perceptions, language, and high-level thoughts. We have identified a key piece of this circuit that had been missed, which led to a cascade of discoveries including a new interpretation of how the neocortex works and a new framework for all forms of intelligent thought.”

Among discoveries highlighted, the paper also predicts the presence of a new type of neuron called “displacement cells,” which partner with cortical grid cells to represent the positions of objects relative to each other. Displacement cells allow the neocortex to learn new objects as compositions of previously learned objects, an important form of generalization.

Co-author Subutai Ahmad elaborated, “Our new theory suggests the brain works differently than commonly believed. Instead of learning one big model of the world, the neocortex learns thousands of models that operate in parallel. We call this the ‘Thousand Brains Theory of Intelligence’.”

“Hawkins consistently concentrates on the big picture: the theoretical frameworks that might explain how the whole system functions. His secret power is to understand the data on the ground while adopting a 30,000 foot view — and this is what allows the possibility of surmounting incrementalism to make real advances in neuroscience,” said David Eagleman, Neuroscientist, adjunct professor in the Department of Psychiatry & Behavioral Sciences at Stanford, and Co-founder and Chief Executive Officer at Neosensory, Inc.

“Numenta’s previous research on learning temporal sequences provided new insights into the role of dendrites, neurons and prediction. Their latest paper offers a novel unifying framework for understanding how the entire brain works,” said Weinan Sun, a neuroscientist at the Howard Hughes Medical Institute’s Janelia Research Campus. “It will impact the field of neuroscience as well as artificial intelligence.”

Jeff Hawkins presented the new theory in a keynote address at the Human Brain Project Summit on October 15, 2018, in Maastricht, the Netherlands. Numenta also has written a companion piece designed to explain the framework in plain language, making it accessible to non-neuroscientists. Links to these and other resources can be found on Numenta’s website https://numenta.com.

Numenta’s new framework for how the brain creates intelligence could offer a roadmap for the future of AI. Many leading AI researchers have concluded that deep learning networks have severe limitations and that new approaches will be needed. Numenta’s brain theory differs sharply from today’s AI techniques. Numenta’s belief is that the Thousand Brains Theory, which incorporates the ability to represent compositional structure, learn through movement, and integrate knowledge across sensory modalities, will prove to be the ultimate framework for artificial general intelligence and robotics.

Numenta scientists and engineers are working on one of humanity’s grand challenges: understanding how the brain works. The company has a dual mission: to reverse-engineer the neocortex and to enable machine intelligence technology based on cortical theory. Co-founded in 2005 by technologist and scientist Jeff Hawkins, Numenta is developing a framework for how the neocortex works. The team tests their theories via simulation, mathematical analysis, and experimental partnerships. Numenta publishes its progress in open access scientific journals, makes all of its code public in an open source project, and licenses its intellectual property and technology for commercial purposes.

Study examines the course of back pain over time