Strength in numbers and experienced individuals are both vital in mongoose warfare, new research shows. 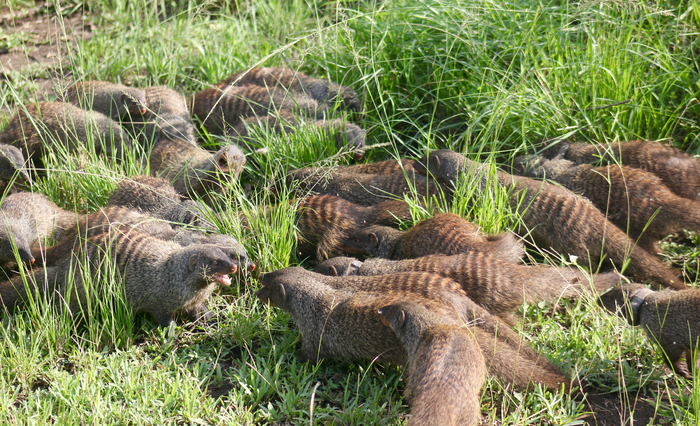 Strength in numbers and experienced individuals are both vital in mongoose warfare, new research shows.

Banded mongooses are one of a handful of mammals that engage in lethal intergroup battles, giving insight into the evolution of warfare.

The number of adult males in a group and the age of the oldest male emerged as the key properties.

But the benefit of having an older male declines if he’s too old (about 11 years onwards) – when males become a “liability rather than an asset” and can be evicted from the group.

“These group contests are much more complex than fights between individual animals,” said Dr Patrick Green, of the Department of Ecology, Evolution, and Marine Biology at UCSB and the Centre for Ecology and Conservation on Exeter’s Penryn Campus in Cornwall.

“Our findings connect to what we see in human societies, where historically strength in numbers has been key in warfare.

“There are also lots of anecdotes and studies about experienced warriors in human societies that galvanise a group during fights.”

Given the importance of mongoose fights for establishing territory and access to food, the findings have implications for group decisions.

“For example, males are important to winning fights, and we know that (compared to females) males get more care when they’re young, are less often evicted and live longer,” said Professor Michael Cant, also from the University of Exeter.

“So, the group may make decisions about who to invest effort in based on the importance of those members to fights.”

The mongooses in the study live on the Mweya peninsula in Uganda, where a team of researchers has been studying them for 25 years.

Previous research led by the University of Exeter has shown that banded mongooses fight over sex and territory, and that females lead their groups into fights, then try to mate with enemy males in the chaos of battle.

The Natural Environment Research Council provided funding for the study. Dr Green was funded by the Human Frontier Science Program, and the research was made possible by permission and support from the Uganda Wildlife Authority, the Uganda National Council for Science and Technology and the wardens of Queen Elizabeth National Park.

The paper, published in the journal Proceedings of the National Academy of Sciences, is entitled: “Fighting force and experience combine to determine contest success in a warlike mammal.”