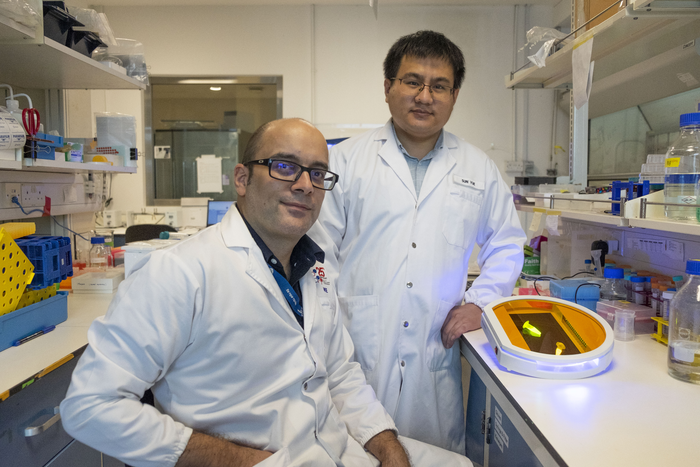 This discovery promises to be faster, safer, more effective, and better suited for gene therapy, cancer treatment, and vaccine delivery, including mRNA-based vaccines such as those currently used for Covid-19 vaccinations by Pfizer and Moderna.

These microdroplets, made up of small proteins named peptides, can encase large biomacromolecules that carry drugs inside them. In doing so, they allow these biological molecules to enter cells, something the molecules cannot do by themselves.

Biomacromolecules are large biological molecules such as nucleic acids (DNA, mRNA), proteins and carbohydrates. They are of great research interest as drug carriers, as they can carry a large amount of drugs, are nontoxic, able to target specific sites, and do not trigger the body’s immune response. This makes them preferable and advantageous over synthetic carriers currently used in the market.

However, their large size and inability to pass through the cell membrane have held them back from widespread clinical use.

Now, the NTU research team, led by Professor Ali Miserez from the School of Materials Science & Engineering and the School of Biological Sciences, showed in lab experiments that their method of first encasing drug-carrying biomacromolecules in protein-based microdroplets lets them reliably and effectively enter cells, overcoming the main challenge of cell entry.

“Biomacromolecules are promising therapeutic prospects for the treatment of various diseases as they have high potency, specificity, and are very safe,” said Prof Miserez. “Despite this broad potential, biomacromolecules suffer from a major drawback: they are impermeable to the cell membrane and thus cannot penetrate the cell by themselves. They need help, which is where our platform comes into place.”

The findings were published in the scientific journal Nature Chemistry in February. The study was funded by a Ministry of Education Tier 3 grant.

The research team has filed two patents based on their published study and are working to commercialise their drug delivery platform method through NTUitive, the University’s innovation and enterprise company.

The development of the team’s novel drug delivery system is aligned with NTU’s commitment to innovation in its recently announced 2025 strategic plan, which aims to translate research into products and outcomes that enhance the quality of life.

The researchers synthesised a peptide derived from squid beak to form the microdroplet due to its biological origin, high efficiency in storing molecules, and low toxicity. They were then able to entrap biomacromolecules inside it through a process called liquid-liquid phase separation (LLPS).

This LLPS process, similar to how oil and water can mix together yet easily separate into two distinct liquids, forms what is known as a coacervate.

This coacervate is able to merge into the cell membrane, although the exact reason why is currently unknown. “Presumably, the liquid-like properties of coacervates achieved via the liquid-liquid phase separation process is critical in their ability to cross the cell membrane, although the precise entry mechanism is still unclear and currently under investigation,” said the paper’s first author, NTU PhD student Yue Sun.

Crucially, this discovery allows biomacromolecules to avoid endocytosis – the process where cells allow foreign substances to enter by surrounding it with a protective membrane.

Traditional drug delivery methods cannot cross into the cell membrane without first being caught by the cell and wrapped within a ‘bubble’ of cell membrane, or endosome. Therefore, these types of drug packages must also be encoded with further instructions to ‘escape’ the endosome in order for them to efficiently release the drugs within the cell.

The team’s coacervates are able to smoothly cross the cell membrane without triggering endocytosis. Once inside the cell, the carrier droplets disintegrate and release the biomacromolecules to do their job of treating various illnesses, including cancer and metabolic diseases.

“You can think about these droplets as molecular ‘Trojan Horses’: they trick the cells into letting them enter, and once inside, they deliver the biomacromolecular ‘soldiers’ that target the disease,” said Prof Miserez.

Bypassing endocytosis is crucial as it reduces drug efficacy. Since the peptide microdroplets developed by the NTU team can bypass this process to enter the cell unhindered, their drug cargo can operate at full strength, said Prof Miserez.

A delivery system for a variety of drugs

In lab experiments, the team was able to successfully deliver fluorescent proteins, which are commonly used to demonstrate the efficiency of drug carriers, as well as the protein drug saporin through this method. By themselves, these proteins cannot enter the cell.

The protein-based cargo was not only able to successfully enter and be released into the cells, but also maintained its bioactivity and efficacy. The team discovered that the cell entry process had a 99 per cent success rate compared to the 50-70 per cent of current commercially-available synthetic carriers.

The research team demonstrated that a wide range of biomacromolecules can be loaded into their microdroplets, from small peptides to enzymes to mRNAs. This makes it viable as a universal drug delivery system. All current delivery systems have to be created separately for different types of drugs.

“Using our peptide droplets as a drug delivery system does away with the need to fabricate drug carriers that have to escape the endosome in order to deliver their cargo,” said Prof Miserez. “Furthermore, the drawback of such drug carriers is that they also have to be tailored to the particular drug that is being used or delivered. Such fabrication methods can be complex, time-consuming, and often contain organic solvents that reduce the bioactivity and efficiency of the drug cargo.”

“However, our peptide droplets can work as a universal delivery system without the need for individual adjustment. One delivery system for a whole range of proteins of various sizes, from big to small, and that can carry both positively- and negatively-charged proteins, is very appealing,” added Prof Miserez.

This discovery can lead to better targeted drug delivery systems that are cheaper, safer, and more effective.

The potential future of drug delivery

The researchers were also able to deliver mRNA molecules into cells with this method. This opens the potential of using mRNA in gene therapy, a possible treatment for serious diseases such as cancer, genetic disorders, or infectious diseases.

“The versatility of drug delivery and subsequent release allows these coacervates to deliver a single or a combination of macromolecular drugs, making this delivery platform very promising for the treatment of variety of illnesses such as cancer, and metabolic and infectious diseases,” said Prof Miserez.

Commenting independently on the study, Dr Mahmood Ahmed, Chief Scientific Officer at artificial intelligence drug development firm Biotech Talo Labs, said: “The exciting findings reported by the NTU scientists provide a path to addressing some key gaps in delivering a range of therapeutic modalities to the site of action. The data reported here demonstrates the potential of these biocompatible coacervates to traverse cell membranes and deliver diverse sets of large molecule entities, with the ability to tune and control the release of payload. Continued development of this discovery will further strengthen the translational utility of these unique coacervates and establish a transformational delivery technology platform.”

The team has filed two patents related to the study. The first patent is the team’s method of preparing the peptides into microdroplets for them to function as drug carriers. The other patent is for the method allowing the microdroplets to enter cells and then disintegrate once inside the cells such as to release the packaged drugs.

While real-world applications remain at least five years away, the scientists say their research has garnered initial interest from pharmaceutical and drug development companies. The team is looking to further their research by beginning animal studies this year.

Ranked amongst the world’s top universities by QS, NTU has also been named the world’s top young university for the past seven years. The University’s main campus is frequently listed among the Top 15 most beautiful university campuses in the world and it has 57 Green Mark-certified (equivalent to LEED-certified) building projects, of which 95% are certified Green Mark Platinum. Apart from its main campus, NTU also has a campus in Singapore’s healthcare district.