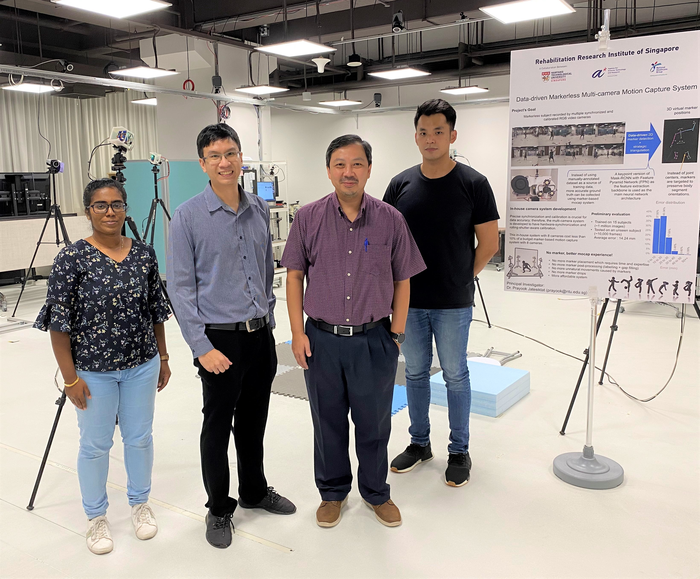 Researchers at Nanyang Technological University, Singapore (NTU Singapore) have developed a motion capture technology called Precise Marker-less, which would aid doctors and physiotherapists in their consultations and diagnoses for patients in need of rehabilitation after an injury or recovering from an illness.

Through capturing and analysing the movements of over 150 subjects with machine learning, the technology has been shown to be more accurate than marker-less motion capture (mocap) systems available in the market, being able to provide 3D anatomical bone landmark locations with an accuracy of 10-15 millimetres, which is about the width of an adult’s little finger.

Precise Marker-less has already received interest from The Posture Lab, a company that offers sports massage and physiotherapy and JM Vistec System, a Singapore-based imaging solutions firm. The research team is also in the process of filing for a patent with NTUitive, NTU’s innovation and enterprise company.

Traditionally, to capture human motion, most mocap labs use a marker-based system. By attaching reflective markers to a subject’s body, cameras reconstruct the movement in 3D by observing the movements of the markers.

However, these physical markers are preventing the system from being applied in many healthcare and commercial settings, as their use is time-consuming and requires a well-trained person to attach markers to the subject. Those markers also do not capture the human subject’s most natural movements, as the subjects must be careful not to knock the markers out of place.

Precise Marker-less eliminates the need for these markers, as it has ‘learned’ where the markers would be placed through machine learning (see video).

Compared to conventional mocap labs that involve a lengthy setup process with technicians and a physiotherapist, the NTU-developed tech would allow patients to start consultations within minutes. As it streamlines the analysis of subjects’ movements by cutting out marker placement and manual data post-processing, consultations would also take an hour less on average, say the researchers.

The NTU-developed technology presents an improved tool to help in the care of Singapore’s ageing population, reflecting NTU’s commitment to using research and innovation to respond to the needs and challenges of healthy living and ageing, which is one of four humanity’s grand challenges that the University seeks to address through its NTU 2025 strategic plan.

Precise Marker-less was developed by a team of researchers, engineers, and data specialists at the Rehabilitation Research Institute of Singapore (RRIS). RRIS was founded in 2016 by NTU Singapore, the Agency for Science, Technology and Research (A*STAR) and the National Healthcare Group (NHG).

RRIS aims to develop data-driven and patient-centric health solutions to prioritise the quality of care for Singapore’s rapidly ageing population, which is vulnerable to immobilising diseases and disabilities like stroke and knee osteoarthritis.

Dr Prayook Jatesiktat, Research Fellow at RRIS, who led the development of Precise Marker-less, said: “Our tool could be applied by professionals in several fields. For example, doctors and therapists could potentially use it to objectively analyse their patients’ movements. The technology could also benefit athletes and coaches, as it gives them access to an easy-to-use motion capture system to assess their sports-related actions. Animators could also use our technology to drive their characters’ movements.”

Providing an independent assessment of the technology’s clinical use, Dr Tan Shu Yun, a family physician and a Senior Consultant at National Healthcare Group Polyclinics, said: “The technology can be potentially deployed in clinics, hospitals and community rehabilitation centres to provide objective assessments of various pathologies, especially those related to movement disorders.”

Providing an industry perspective, Mr Eugene Goh, Managing Director of JM VisTec System, said: “Without the need for markers, we foresee good potential in the marketability and commercial value of this innovation. Moreover, its high analysis accuracy would definitely be its unique selling proposition.”

The RRIS team requires a simple setup of two to four cameras, a computer, as well as a calibration kit, which is used to process the data derived from analysing the subject’s movements. This would make it ideal for industry-based settings, requiring little time and space to be used after it is fully calibrated and adjusted.

The team attributes their technology’s precision to its cache of data, which includes over ten million images of subjects’ movements, which as of March 2022, translates to 16 terabytes of data.

Associate Professor Ang Wei Tech, Executive Director of RRIS, who supervised the project’s development, said: “To sharpen the precision of such a model, we harnessed the power of machine learning to train a computation model to predict the location of markers on video footage of a moving subject. The technology developed by our team complements the precision rehabilitation research at RRIS, which harnesses data analytics and computer simulations to enable the translation of such research work to the actual clinical practice.” Assoc Prof Ang is also from NTU’s School of Mechanical and Aerospace Engineering.

Currently, Dr Jatesiktat and his team are continuing tests on their Precise Marker-less technology at RRIS’ labs, based in the NTU Singapore campus, and at the Clinical Sciences Building in NTU’s Novena LKCMedicine campus. The researchers aim to further support the analysis and treatment of a wider range of physical movements and installation environments.

Ranked amongst the world’s top universities by QS, NTU has also been named the world’s top young university for the past seven years. The University’s main campus is frequently listed among the Top 15 most beautiful university campuses in the world and has 57 Green Mark-certified (equivalent to LEED-certified) buildings, of which 95% are certified Green Mark Platinum. Apart from its main campus, NTU also has a campus in Novena, Singapore’s healthcare district.