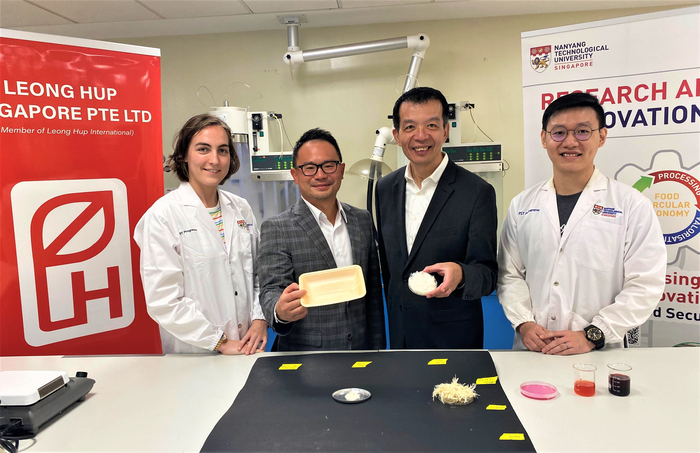 One of the key innovations include using the keratin from chicken feathers as a material for egg trays, serving as a biodegradable replacement for synthetic polymers, whose production, use, and disposal causes greenhouse gas emissions, as they are made from petroleum oil.

Yearly, billions of kilograms of unwanted chicken feathers are thrown out from poultry process plants. This by-product is typically either buried in landfills or incinerated, contributing to greenhouse gasses emissions.

As the material produced from the chicken feathers are more durable and are as flexible as those based on synthetic polymers made from petroleum oil, the newly discovered method would serve as a greener alternative.

The collaboration also resulted in another innovation – the successful conversion of biological waste from Leong Hup Singapore’s poultry farming, such as blood and bones, into an alternative and cost-effective culture medium that could be used to cultivate cell-based meat.

Poultry blood and the by-products of processing animal and food products are dense in organic matter, and have high concentrations of growth factors and other nutrients.

These latest innovations, part of a research collaboration agreement signed by NTU Singapore and Leong Hup Singapore in March, are examples of groundbreaking research that supports the NTU 2025 strategic plan, which seeks to address humanity’s grand challenges on sustainability and accelerate the translation of research discoveries into innovations that mitigate human impact on the environment.

Professor William Chen, Director of NTU’s Food Science and Technology Programme, co-lead of the industry collaboration, said: “The project has clearly demonstrated that feathers can no longer be viewed as a waste product. Instead, they should be seen as a source of valuable raw materials and an essential component to the circular economy, in which raw materials, components and products lose their value as little as possible. The utilisation of chicken feather fibres in composite materials is a new source of materials that can be economic, eco-friendly, and recyclable. Meanwhile, the repurposing of poultry blood to cultivate cell-based chicken meat could be a step towards cutting down the carbon footprint of the food industry.”

Mr Lau Joo Hwa, Chief Executive Officer of Leong Hup Singapore said: “Being one of Singapore and Malaysia’s main poultry suppliers, it’s important to future-proof the company’s practices, while also raising our sustainability profile. By tapping on NTU’s rich research expertise, especially with the scientists from the University’s Food Science and Technology Programme, it has great potential to also impact the poultry industry in Southeast Asia and beyond.”

A step closer towards a ‘zero-waste’ poultry industry

Chicken feathers were thoroughly washed with distilled water and detergent to remove different sorts of contaminants such as bloodstains, oil, and grease from the surface.

These feather fibres were dried at room temperature (27°C)  for four days and cut by a crushing machine. The chicken feather fibres and unsaturated polyester resin were mixed and placed inside glass moulds and kept in a fume hood for one day.

In laboratory tests, the materials that used keratin from chicken feathers could withstand nearly two times of force exerted on it, compared to conventional plastic trays used to contain chicken meat.

The NTU scientists have also managed to effectively extract those nutrients and develop a solution that has the potential to grow animal cells for lab-grown meat. In recent tests, they also showed that the serum derived from poultry blood and biological matter has the potential to replace foetal bovine serum as a medium to cultivate cell-based meat, as it has similar concentrations of growth factors and other nutrients.

Prof Chen added: “The cultivation of lab-grown meat has the potential to reduce and even one day end the slaughter of farm animals and the impact rearing farm animals has on the environment. But it is expensive, partly due to the high cost of the medium that is used to grow the meat. Our collaboration with Leong Hup Singapore sees us applying innovations developed by NTU’s Food Science and Technology Programme to address that problem, bringing down the price for the medium, while repurposing materials that would otherwise have been discarded.”

Mr Lau said that Leong Hup is currently testing the innovations in its Singapore plant, and expects to implement the products it has developed with NTU in its overseas plants in Malaysia and Southeast Asia, by 2023.