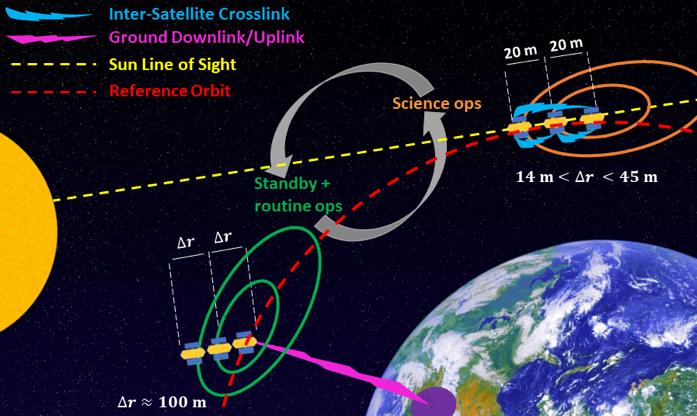 More than 91 million miles from Earth, the sun poses a mystery that has long stumped scientists and defies the laws of thermodynamics: Why the corona, the sun’s outer layer, is 1000 times hotter than the layer beneath it.

“Unraveling the mysteries of the universe often requires uncovering things unseen with the human eye through new sensing and imaging technologies,” said Farzad Kamalabadi, the Kung Chie and Margaret Yeh Endowed Professor in Electrical and Computer Engineering at the University of Illinois at Urbana-Champaign and an affiliated with the Coordinated Science Laboratory.

Kamalabadi is leading a newly funded $4.4 million project awarded by the National Science Foundation to develop a first-of-its-kind distributed telescope that will provide unprecedented resolution for space imaging, which could lead to a new understanding of space. The project, called “a transformative technological approach” by NSF, is a collaboration between 10 universities and the NASA Goddard Space Flight Center, with Illinois as the lead institution. The telescope will demonstrate a number of breakthrough technologies including precision formation flying, novel diffractive optics (splitting a single beam into multiple beams that can be focused at different points along the same axis), computational imaging, and 5G-inspired high data rate inter-satellite communication.

According to the NSF, the CubeSat Ideas Lab: VIrtual Super-resolution Optics with Reconfigurable Swarms (VISORS) project, “will provide a transformational leap” in revealing filamentary structures in the sun’s atmosphere known as the corona – an aura of plasma that surrounds the sun and other stars. The project aims to provide insights into the origins of coronal heating, a fundamental, yet unanswered question in space science and stellar astrophysics.

All aspects of the telescope will be handled by the VISORS team, from design, to development, construction, and even the eventual post-launch operations. The resulting product will be a new class of space telescopes with resolution that is currently unavailable, allowing researchers to investigate astrophysical processes in unprecedented detail, and according to Kamalabadi, enable new scientific discoveries.

“Many scientific discoveries come about as a result of our ability, through technological breakthroughs, to observe phenomena at scales unseen before,” said Kamalabadi, the principal investigator on the project. “There are many such examples including Nobel Prize winning discoveries such as the Higgs Bosson observed by the Large Hadron Collider and gravitational waves detected with laser interferometry. More recently, Very Long Baseline Interferometry enabled the radio-imaging of black holes. These are just a few examples of what the U.S. National Academy of Engineering outlined in a report identifying Grand Challenges for Engineering in the 21st Century as: Engineer the Tools of Scientific Discovery.”

Graduate and undergraduate students will participate in all stages of development, and the new technologies will be demonstrated in classrooms at partner institutions through an open-source software toolkit to be developed by the team. For younger audiences, there is a plan for a hands-on demonstration of the virtual telescope for a science museum exhibit.

“Small satellites have always had a very strong student participation component,” said Kamalabadi. “This human capacity bulding aspect of small satellite development was envisioned by NSF to provide opportunities to capture the imagination of students in activities that go beyond what is typical on most campuses, and to prepare the next generation with the skillsets needed to innovate in the ever-expanding arena of space technologies.”

In order to do this research Kamalabadi and his team had to go through a vigorous and competitive review process known as the NSF Ideas Lab, which was led by an interdisciplinary collaboration among three NSF directorates, Geosciences, Engineering, and Computer and Information Science and Engineering Directorates. More than 120 preliminary proposals were received and narrowed to approximately 30 participants invited to spend a week brainstorming and developing concepts together. At the end of the week seven groups presented mission concepts to NSF and NASA program directors and experts, four of which were invited for full proposal submission as finalists, and two were selected to receive funding for this high-profile program.

BU finds concerns about other painkillers contributed to opioid crisis

Stem cells reprogrammed into neurons could reveal drugs harmful to…