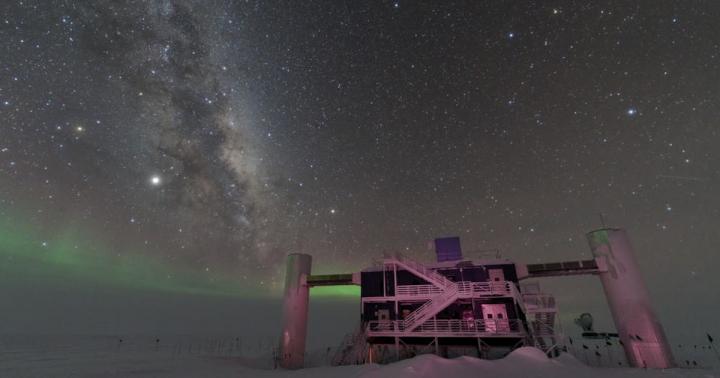 LAWRENCE — Neutrinos are almost intangible subatomic particles that hardly interact with matter in the universe. Billions of neutrinos are shooting through your body as you read this sentence, and you don’t even notice. Explosive deep-space events like gamma-ray bursts, merging black holes, neutron stars and even the Big Bang all emitted high-energy neutrinos that shower the Earth, holding secrets to the nature and history of the cosmos.

Now, a $1.2 million award from the National Science Foundation’s EPSCoR program will create a new faculty position at the University of Kansas within the next year, support postdoctoral researchers and graduate students, and fund work to better detect and analyze neutrinos at the IceCube Neutrino Observatory (IceCube) in Antarctica and a new observatory, dubbed RNO-G, in Greenland.

The work at KU is part of a larger $6 million collaboration among multiple universities to develop the large-scale neutrino detection instruments and harness big data.

“We’re going to be instituting a project this summer in Greenland that will pilot a lot of the hardware we want to use for the next phase of the IceCube experiment, so-called IceCube-Gen2, at the South Pole,” said co-principal investigator David Besson, professor of physics & astronomy at KU. “I’ll be going to Greenland for six weeks over the summer as part of that effort.”

Besson said the study of neutrinos will push forward understanding of the cosmos beyond the capability of the telescope, the standard instrument of astronomy for 400 years.

“The universe isn’t entirely transparent to light, especially very high-energy electromagnetic radiation, like gamma rays,” he said. “The universe is filled with this sort of fog of faint light left over from a time close to the Big Bang called the cosmic microwave background. Because that faint fog permeates the entire universe, very high-energy gamma rays produced at the edge of the universe can’t make it to our terrestrial observatories — they’re absorbed by that fog. If you wanted to trace some interesting astrophysical object, not by the gamma rays that are produced, but by the protons that it might produce, the protons will also be absorbed on that fog. So, how do you observe the far reaches of the universe at these energy levels? The only particle that’s capable of reaching us is the neutrino because it’s a very penetrating particle.”

Because neutrinos are so elusive, scientists at IceCube in Antarctica and IceCube2 in Greenland transform miles and miles of ice into huge neutrino detectors.

“Because neutrinos are so penetrating you have to have a huge target to stop a neutrino,” he said. “It very rarely interacts with matter, and that’s how it actually makes it through this fog. So, we’re using the Antarctic ice sheet as our very thick target for neutrino interactions. The ultimate goal is that you want to do all the science that you can currently do with a standard telescope. But you want to do it with a ‘neutrino telescope.'”

Besson’s work will involve improving calibration of these massive instruments to account for deformations in the ice, radio-frequency interference and other noise that make it harder to detect neutrino signals.

“We’re working to develop a technique that’s going to learn how to classify the different types of background and then specifically target those backgrounds for suppression,” Besson said. “We will develop background ‘templates’ and compare each event against that template — everything else that isn’t background will pass through as something potentially interesting. We already have examples of what this sort of noise would be like. It can be fairly mundane. The South Pole is an area where there’s not just IceCube but there are also other experiments — so there are electronics and those can produce noise. People driving on snowmobiles will produce noise. With very high wind velocities it’s possible for the wind to ionize the surface of the snow and then you get static electric effects and those will produce radio frequency.”

With massive amounts of data being collected by IceCube and IceCube-Gen2, Besson and his collaborators will work on their “ability to manage big data through advanced data science techniques in data throughput, calibration, simulation, analysis, modeling and hypothesis testing.”

“You want to be able to push the detection threshold as absolutely low as you can, and that means that you’re going to be collecting huge reams of data,” Besson said. “A lot of that data is, of course, just noise. It’s basically just junk. But you want to have algorithms capable of using sophisticated machine learning techniques that winnow and throw away the gazillions of background events and pick up the one interesting event on the fly. You want to feed that back into your data collection. So, your data collection is at the same time getting more intelligent about which events it’s writing to disk.”

The new EPSCoR grant is led by researchers at the South Dakota School of Mines and Technology. Other institutions from Alabama, Alaska, Delaware and Nebraska are participating in the project.