University of Arizona researcher will use $500,000 to conduct STEM outreach and make computers more energy-efficient 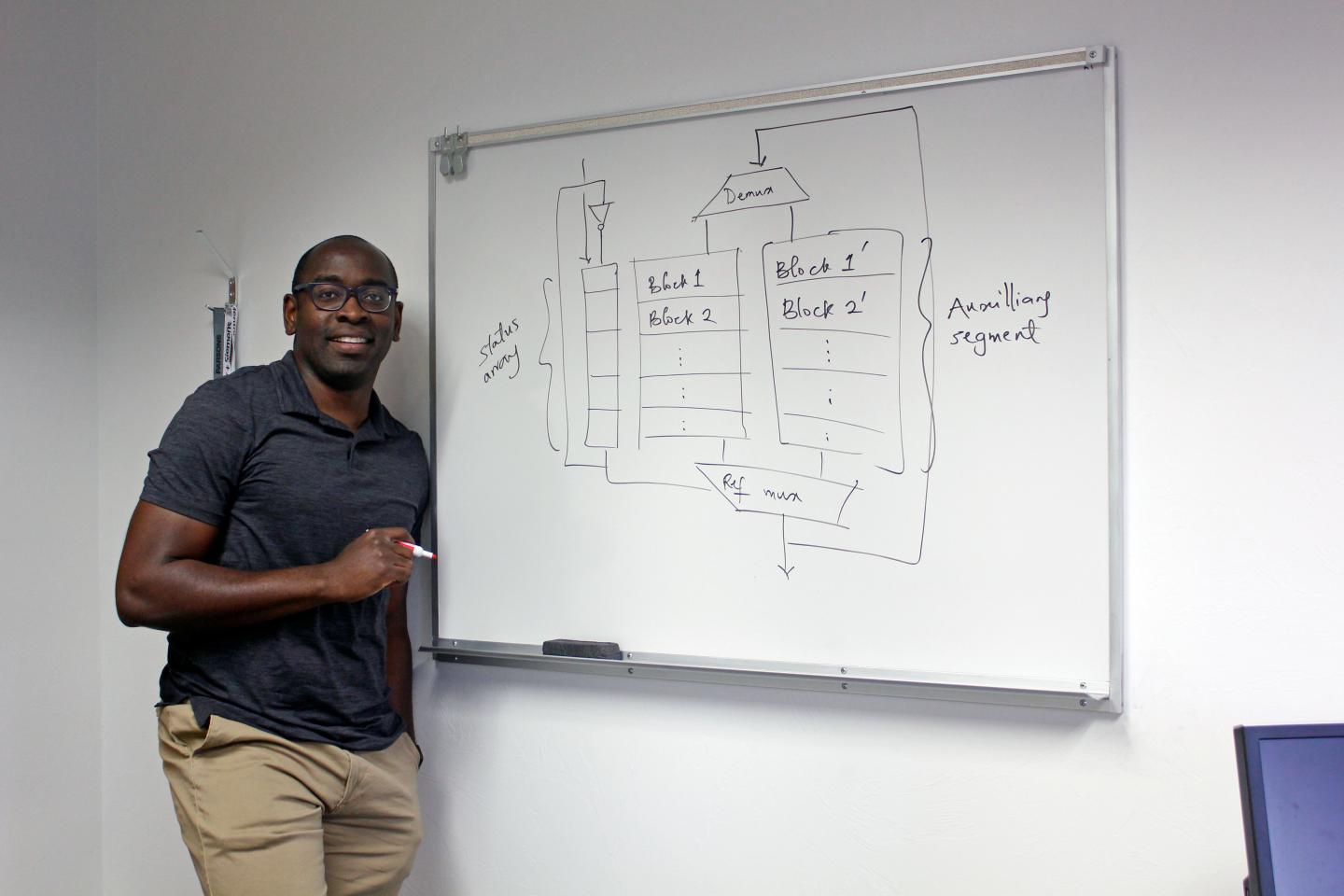 As a child and young adult, Tosiron Adegbija had no desire to follow in his parents’ footsteps and become a professor. But during his doctoral studies, the native Nigerian realized teaching was nothing short of his dream job.

A five-year, $500,000 Faculty Early Career Development Award from the National Science Foundation will support the University of Arizona electrical and computer engineering assistant professor’s teaching and research. The CAREER award is NSF’s most prestigious award in support of early-career faculty who have the potential to serve as academic role models in research and education and to lead advances in the mission of their department or organization.

“I’m especially excited about this award because it focuses on both the research and the education,” Adegbija said. “I feel like education should be of paramount importance, and research should not be pursued at the expense of teaching.”

Adegbija is researching techniques for efficiently leveraging a material called spin-transfer torque random access memory, or STTRAM, as an alternative for static RAM in computer caches. STTRAM can store the same amount of data as static RAM using only a quarter to one-ninth the space, making it especially useful for resource-constrained devices like mobile phones and tablets.

A computer cache is a part of memory where frequently used items are stored to speed up processing. Adegbija compares a computer’s main memory and its cache to a fridge and a minifridge. If he wakes up hungry for a midnight snack every single night, he might start storing snacks in a minifridge by his bed, rather than taking the time to walk to the kitchen refrigerator each time.

“The minifridge is like the cache, while the refrigerator in the kitchen is the main memory,” he said. “When I know I’ll need items frequently, I keep them in my minifridge, so I can substantially reduce how much time it takes to retrieve them. It’s small, though, so I can’t fit everything in there.”

While they reduce the time it takes to access and run programs on computer devices, caches increase power consumption, which makes them expensive. However, if carefully designed, they can also make computers more energy-efficient.

“If you reduce how much time you spend accessing data, you may also be expending less energy despite consuming more power,” Adegbija said. “My research explores new ways to take advantage of the cache’s positive qualities, while mitigating its negative qualities.”

Data for most programs only need to remain in the cache for up to a few hundred milliseconds, but STTRAM intrinsically retains data for much longer — up to ten years. Adegbija’s team has found that designing STTRAM caches to retain data for only as long as needed by each program can reduce energy consumption by up to 84%. Their research focuses on designing STTRAM caches that can dynamically and automatically adapt to the needs of different running programs, thereby making resource-constrained devices more energy-efficient.

“Tosiron’s work on speeding up computers and his commitment to students says it all,” said Tamal Bose, head of Arizona electrical and computer engineering. “He is more than deserving of this award, and our students are lucky to have him.”

A Passion for Teaching

As part of the NSF award, Adegbija will do STEM outreach and involve students in his research.

That won’t be difficult for a faculty member who received the spring 2018 Excellence at the Student Interface Award from the College of Engineering and is known for his dedication to mentoring.

In 2018, Adegbija published a paper about using the Internet of Things for aircraft safety with Honors College student Jeremiah Pate, a biochemistry major who was a student at BASIS Oro Valley High School when they started work on the paper. Pate also won an award at an international science fair while in high school and founded Lunasonde, a company that specializes in using tiny satellites to image Earth’s subsurface from space.

“Working with Jeremiah was a very rewarding experience, and I plan to have more similar interactions with other high school students,” Adegbija said.

The NSF funding will help Adegbija collaborate with the STEM Learning Center to create activities for K-12 students and with the Office of Instruction and Assessment to develop curriculum and teaching methods that foster student success. He’ll also be leading outreach efforts to recruit women and other underrepresented minorities.

See and be seen