A challenge in materials design is that in both natural and manmade materials, volume sometimes decreases, or increases, with increasing temperature. While there are mechanical explanations for this phenomenon for some specific materials, a general understanding of why this sometimes happens remains lacking. 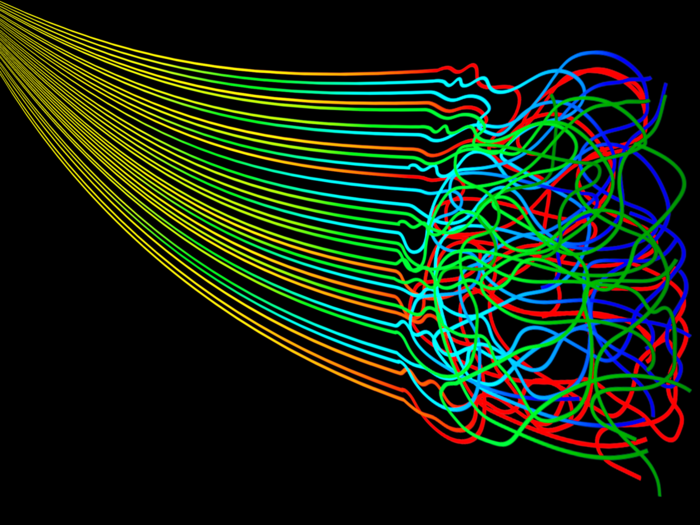 A challenge in materials design is that in both natural and manmade materials, volume sometimes decreases, or increases, with increasing temperature. While there are mechanical explanations for this phenomenon for some specific materials, a general understanding of why this sometimes happens remains lacking.

However, a team of Penn State researchers has come up with a theory to explain and then predict it: Zentropy.

Zentropy is a play on entropy, a concept central to the second law of thermodynamics that expresses the measure of the disorder of a system that occurs over a period of time when there is no energy applied to keep order in the system. Think of a playroom in a preschool; if no energy is put into keeping it tidy, it quickly becomes disordered with toys all over the floor, a state of high entropy. If energy is put in via cleaning up and organizing the room once the children leave, then the room returns to a state of order and low entropy.

Zentropy theory notes that the thermodynamic relationship of thermal expansion, when the volume increases due to higher temperature, is equal to the negative derivative of entropy with respect to pressure, i.e., the entropy of most material systems decreases with an increase in pressure. This enables Zentropy theory to be able to predict the change of volume as a function of temperature at a multiscale level, meaning the different scales within a system. Every state of matter has its own entropy, and different parts of a system have their own entropy.

“When we talk about the configuration entropy (different ways particles rearrange within a system) that entropy is only part of the entropy of the system,” said Zi-Kui Liu, Dorothy Pate Enright Professor of Materials Science and Engineering and primary investigator in the study. “So, you have to add the entropy of individual components of that system into the equation, and then you consider the different scales, the universe, the Earth, the people, the materials, these are different scales within different systems.”

The authors of the study, published in the Journal of Phase Equilibria and Diffusion, believe that Zentropy may be able to predict anomalies of other physical properties of phases beyond volume. This is because responses of a system to external stimuli are driven by entropy.

Macroscopic functionalities of materials stem from assemblies of microscopic states (microstates) at all scales at and below the scale of the macroscopic state of investigation. These functionalities are challenging to predict because only one or a few microstates can be considered in a typical computational approach such as the predictive “from the beginning” calculations, which help determine the fundamental properties of materials.

“This challenge becomes acute in materials with multiple phase transitions, which are processes that convert matter from one state to another, such as vaporization of a liquid,” Liu said. “This is often where the most transformative functionalities exist, such as superconductivity and giant electromechanical response.”

Zentropy theory “stacks” these different scales into an entropy theory that encompasses the different elements of an entire system, presenting a nested formula for the entropy of complex multiscale systems, according to Liu.

“You have these different scales and you can stack them up with Zentropy theory,” Liu said. “For example, atoms as a vibrational property, that’s low scale, then you have electronic interaction, that even lower scale. So now how do you stack them together to cover the entire system? So that is what the Zentropy equation is about, stacking them together. It creates a partition function that is the sum of all the entropy scales.”

This approach has been something Liu’s lab has worked on for more than 10 years and five different published studies.

“The idea actually became very simple after we studied it and understood it,” Liu said.

Zentropy has potential to change the way materials are designed, especially those that are part of systems that are exposed to higher temperatures. These temperatures, given thermal expansion, could cause issues if the materials expand.

“This has the potential to enable the fundamental understanding and design of materials with emergent properties, such as new superconductors and new ferroelectric materials that could potentially lead to new classes of electronics,” Liu said. “Also, other applications such as designing better structural materials that withstand higher temperatures are also possible.”

While there are benefits for society in general, researchers could apply Zentropy to multiple fields. This is because of how entropy is present in all systems.

“The Zentropy theory has the potential to be applied to larger systems because entropy drives changes in all systems whether they are black holes, planets, societies or forests,” Liu said.

Journal of Phase Equilibria and Diffusion