Single crystals are materials in which the crystal lattice is continuous and unbroken to the edges of the sample, with no grain boundaries. The atoms occupy regular positions, which are repeated indefinitely in space. While polycrystals are made up of many crystal grains or crystallites of varying sizes and orientations, monocrystals consist of a single grain. 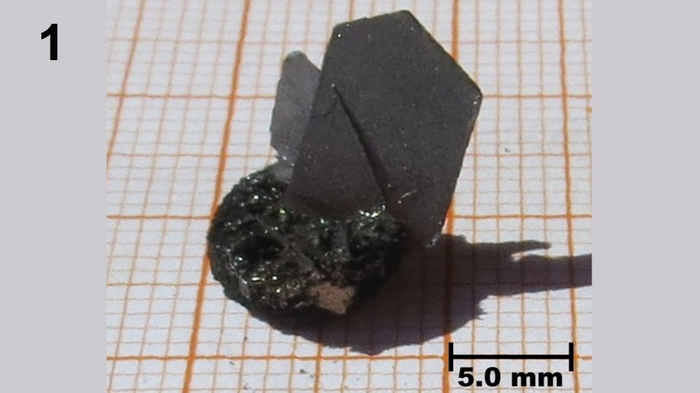 Single crystals are materials in which the crystal lattice is continuous and unbroken to the edges of the sample, with no grain boundaries. The atoms occupy regular positions, which are repeated indefinitely in space. While polycrystals are made up of many crystal grains or crystallites of varying sizes and orientations, monocrystals consist of a single grain.

A large supply of high-quality monocrystals is of the utmost importance to the study of the intrinsic physical properties of materials. They can be synthesized by various techniques. The most widely used method of growing single crystals of intermetallic compounds is known as chemical vapor transport (CVT).

An alternative technique has been designed and successfully tried out by a team led by researchers at the University of São Paulo’s Lorena School of Engineering (EEL-USP) in Brazil. An article on the study is published in the Journal of Crystal Growth.

“Conventional CVT consists of a chemical reaction in which the compound reacts with the chemical agent to form a volatile complex. This complex moves to a different region of the experimental apparatus with a different temperature from that of the zone in which the first chemical reaction occurred and is eventually deposited in the form of a single crystal. A temperature gradient is required in order for the single crystal to grow as it creates the necessary thermodynamic potential. In the novel technique, which we call isothermal chemical vapor transport [ICVT], growth occurs without the need for a temperature gradient,” said Lucas Eduardo Corrêa, first author of the article.

The study was part of Corrêa’s PhD research, supervised by Professor Antonio Jefferson da Silva Machado and supported by a scholarship from FAPESP.

“In the method we developed, the chemical potential gradient is what drives the growth of the single crystal,” said Machado, last author of the article. “In a closed environment, a pellet of polycrystalline material and a transport agent are placed in contact at a constant temperature high enough to produce a reaction and form gaseous complexes. It’s reasonable to consider that the transport agent initially reacts with the surface of the polycrystalline material, creating a chemical potential gradient between the interior of the grains and the interface with the gas phase. Owing to this gradient, thermodynamic equilibrium can’t be obtained between the gas and solid phases. When the gas phase reaches saturation point – which is facilitated by the use of very small amounts of the transport agent – the chemical potential of the pellet is lower than that of the gas. At this point, inversion of the gas flux occurs, and the surface of the pellet serves as a point for single crystal nucleation [see photo above] .”

According to the researchers, the isothermal growth process has a number of advantages over conventional CVT. The first is that there is no need for a two-zone furnace since in isothermal growth the temperature is kept constant throughout the experimental apparatus. Generally speaking, growth can be promoted using a simple uniform furnace. Second, there is no need for chemical attack on the tube since the pellet itself is the nucleation point, simplifying the growth process.

“It’s important to note that the crystallographic quality of the crystals obtained is very high. No seeded crystals occur. In sum, the isothermal growth process is a simplified version of conventional CVT that can grow much larger crystals,” Corrêa said.

Although growth was obtained for such materials as ZrTe2, TiTe2 and HfTe2, which are almost two-dimensional, the researchers believe the method can be applied to other systems under the right thermodynamic conditions.

“The relevance of the materials in question lies in the gap between the tellurium atoms [Figure (a) below], so that other atoms or molecules can be intercalated into the material,” Machado said. “Indeed, the electronic structure of the compound ZrTe2 exhibits a non-trivial topology. We discovered that intercalation of nickel [Ni] into this gap leads to superconductor behavior with a critical temperature close to 4.0 K [Figure (b)].”

Another instability observed in the material – and one that competes with superconductivity – is the existence of charge density waves (CDWs). In addition to potential quantum computing applications, these properties make such materials attractive for the study of the fundamentals of solid-state physics. Other intercalations were tested by the researchers and are being analyzed as part of Corrêa’s PhD research.