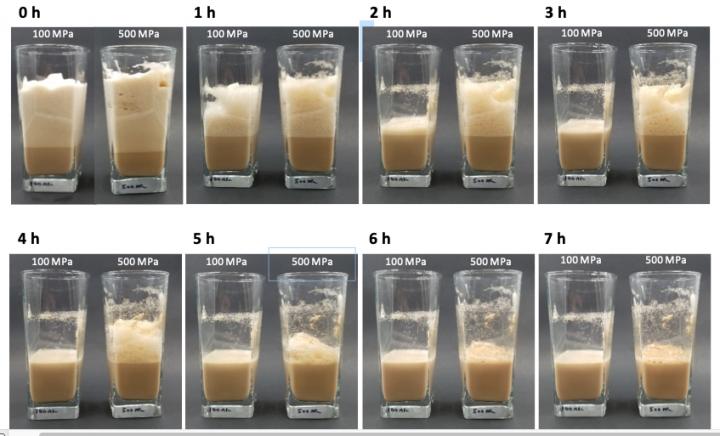 A novel method of processing — using high-pressure jets to spray milk and then quickly drying the spray — yields skim milk powders with enhanced properties and functionality, according to Penn State researchers, who say the discovery may lead to “cleaner” labels on foods.

“Food manufacturers know consumers would like to see products that have ingredients that they can recognize,” said Federico Harte, professor of food science. “The hope offered by our work is that we will be able to use milk proteins as emulsifiers or as foaming agents in food products in which a clean label is important, such as ice cream.”

“On the label, it would just say, ‘milk proteins’ — that is something all consumers can recognize, nothing is synthetic,” he said. “Concerns about ‘clean labels’ are growing in the food industry — these are definitely buzzwords. There is no legal definition for what a clean label is, but the best way I can define it is a label that my grandmother can recognize all the ingredients.”

There is nothing wrong with most of these unfamiliar ingredients, so far as we know, Harte added. But, increasingly, consumers do not want them, so the food industry hopes to remove synthetic ingredients such as emulsifiers and foaming agents from the labels of foods, using this novel processing technology.

Among the most promising properties researchers saw in the skim milk powder created by high-pressure jet spraying and drying milk were marked increases in foam expansion and foam-volume stability. That means the skim milk powder is a great candidate for use in lattes, Harte explained.

“The thing that we found most attractive was the enhanced foaming properties, and we may be able to develop vending machine mixing powders consisting of just milk and coffee that will create a long-lasting foam,” he said. “How long do we need foam to last in hot lattes? Perhaps not for hours, but think about a bottled cold cappuccino coffee — that is where we need a longer-lasting foam.”

High-pressure jet processing of food is a completely new concept, Harte pointed out, and he has been experimenting with the idea for about four years at Penn State. His latest research, recently published in the Journal of Food Engineering, was conducted in a pilot plant in the Rodney A. Erickson Food Science Building. The study focused on a device that pressurized pasteurized, skim milk using an intensifier pump, and then sprayed the milk through a diamond or sapphire nozzle.

The liquid exits the nozzle as a jet of fine droplets that collide with the air, forming an aerosol. Then the spray is quickly dried to obtain skim milk powders. In comparison to liquids, Harte noted, powders possess a broader spectrum of applications due to the inherent shelf-life stability and lower cost associated with their transportation and storage.

The challenge now is to scale-up the process for industry, Harte explained. And it will not be easy.

“The flow-through of these pumps is relatively low, that is the number one difficulty,” he said. “We need to achieve a throughput that is attractive to industry. We are talking about a few liters per minute now, and industry needs hundreds of liters per minute. How do we get from here to there? We are discussing with the manufacturers of the pumps ways to scale this up.”

Supported by Penn State and the Department of Food Science, Harte has applied for a patent on foaming properties from milk protein. That patent right now is under revision and should be final before the end of this year. Also, research in his laboratory using milk proteins as emulsifiers in salad dressing is ongoing.

Also involved in the research were Charith Hettiarachchi and Grace Voronin, graduate students in food science.

Dairy Management Inc. and the U.S. Department of Agriculture’s National Institute of Food and Agriculture funded this research.

Scienmag Apr 1, 2019
A team of physical chemists has unraveled the inner workings of a process that allows hard-working T cells to tune…

How to tell if you’ve found Mr. or Mrs. Right? For lemurs,…