Oxygen plays a key role in various industrial processes, including combustion and energy conversion, which are involved in important fields such as fuel cells, automotive engines, and gas turbines. Thus, a real-time, accurate measurement of oxygen concentration is crucial for the seamless functioning of these industries. 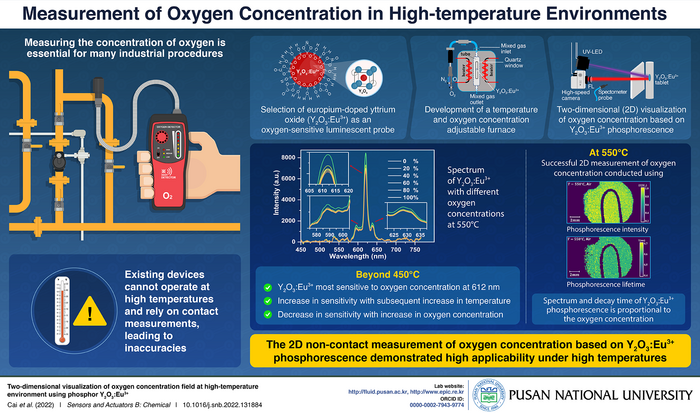 Oxygen plays a key role in various industrial processes, including combustion and energy conversion, which are involved in important fields such as fuel cells, automotive engines, and gas turbines. Thus, a real-time, accurate measurement of oxygen concentration is crucial for the seamless functioning of these industries.

To address this problem, a team of researchers led by Prof. Kyung Chun Kim from Pusan National University, Korea, developed and tested a non-contact technique to measure oxygen concentration under high temperatures. In their study, which was made available online on 19 April 2022 and published in Volume 364 of Sensors and Actuators B: Chemical on 01 August 2022, the team described how a phosphorescent material’s glow, or “phosphorescence,” can be leveraged to measure oxygen concentration.

The material in question was yttrium oxide doped with europium (Y2O3:Eu3+)—a phosphor, i.e., a material that emits light in response to radiation—which has a highly temperature-resistant crystalline structure. Like other phosphors, Y2O3:Eu3+ absorbs light energy and re-emits it at a lower frequency. However, owing to its unique molecular arrangement with oxygen vacancies, its phosphorescence varies depending on the surrounding oxygen. This high sensitivity to oxygen makes Y2O3:Eu3+ a suitable non-contact luminescent probe.

Importantly, they also observed two properties of Y2O3:Eu3+ phosphorescence that could be used to measure oxygen concentration at 550°C: its intensity and lifetime, i.e., the time it takes for Y2O3:Eu3+ to stop emitting light. Although measurements using the latter were slightly more accurate, these findings demonstrated the overall applicability of using the phosphorescence of Y2O3:Eu3 at high temperatures.

Discussing these findings, Dr. Kim states, “Our study is the first to develop a simple, non-contact, 2D method that can provide technical support for the performance improvement of many industrial products at high temperatures.”

What are the implications of these findings? Prof. Kim further remarks, “This method can enhance basic mechanism research and industrial production applications, which would help us understand unknown thermophysical phenomena in daily life and engineering.”

It is safe to say that by virtue of its simplicity and accuracy, this method is likely to find a home in many fields and pave the way for a new era of oxygen concentration sensors!

About Pusan National University
Pusan National University, located in Busan, South Korea, was founded in 1946, and is now the no. 1 national university of South Korea in research and educational competency. The multi-campus university also has other smaller campuses in Yangsan, Miryang, and Ami. The university prides itself on the principles of truth, freedom, and service, and has approximately 30,000 students, 1200 professors, and 750 faculty members. The university is composed of 14 colleges (schools) and one independent division, with 103 departments in all.
Website: https://www.pusan.ac.kr/eng/Main.do

About the author
Prof. Kyung Chun Kim is a Distinguished Professor of the School of Mechanical Engineering and Director of the Eco-friendly Smart Ship Parts Innovation Center at Pusan National University in South Korea. His group is developing quantitative visualization methods for velocity, temperature, oxygen concentration, and stress/strain fields in both high and cryogenic temperature environments based on phosphorescence. The methods are used to develop solid oxide fuel cells and liquid hydrogen storage tanks. He also serves as the Editor-in-Chief of the Journal of Visualization, Springer. In 1987, he received a PhD in Fluid Mechanics from Korea Advanced Institute of Science and Technology.

Sensors and Actuators B Chemical