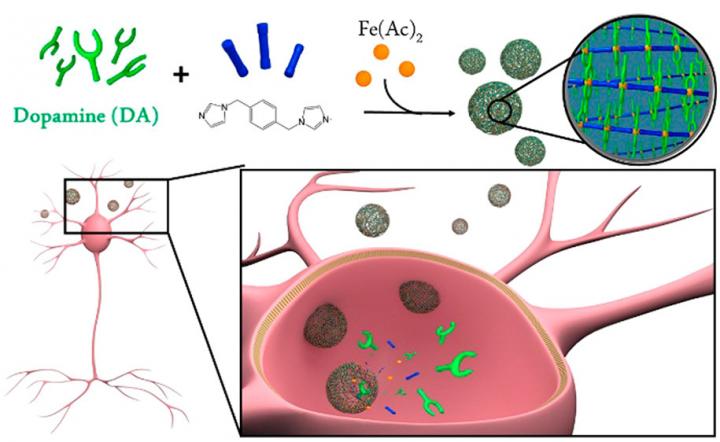 Parkinson’s disease (PD) is a common neurodegenerative disorder caused by the death of dopaminergic neurons in a part of the brain (known as substantia nigra pars compacta), which leads to a deficit of dopamine (DA), one of the main neurotransmitters active in the central nervous system. Symptomatic treatment focuses on increasing the concentration of dopamine into the brain.

However, dopamine is not directly administered, because it is unable to cross the so called blood-brain barrier, which prevents some of the substances circulating in the blood to penetrate into the nervous system. Thus, DA precursor levodopa (L-DOPA) -an amino-acid which participates in the synthesis of dopamine- is used, due to its better ability to cross such barrier. Nevertheless, long-term and intermittent administration of this drug is associated with important disabling complications, such as motor disorders and involuntary muscle movements.

In a paper recently published in ACS Nano, synthetic melanin-like nanoparticles are used to overcome these limitations. This research was coordinated by Dr Daniel Ruiz-Molina, leader of the ICN2 Nanostructured Functional Materials Group, and Dr Julia Lorenzo, leader of the Protein Engineering Group at the Institute of Biotehcnology and Biomedicine (IBB) of the Universitat Autònoma de Barcelona (UAB), and was developed in collaboration with the Neurodegenerative Diseases group of Vall d’Hebron Research Institute (VHIR), led by Prof. Miquel Vila.

The main objective of this work was to obtain a “nanoplatform” -which is a biocompatible nano-structure including the substance to be delivered- able to reach the brain through a noninvasive route and generate a slow and controlled release of dopamine. A tailor-made nanoscale coordination polymer (NCP), characterized by the reversible incorporation of DA as its principal component, was tested in vitro and in vivo in rats. Intranasal administration of these nanoparticles, called DA-NCPs, showed a relevant biocompatibility, non-toxicity and a fast and efficient distribution of dopamine in the central nervous system of the animals (avoiding the blood-brain barrier).

As reported by the researchers, the proposed method is effective in delivering dopamine to the brain and, thus, in reversing Parkinson’s symptoms. In addition, the synthetic methodology used is simple, cheap and exhibited a satisfactory yield (with a DA loading efficiency up to 60%).

These findings establish nanoscale coordination polymers as promising future candidates for efficient nasal delivery of drugs to the central nervous system, and thus for the symptomatic treatment of people affected by Parkinson’s and other neurodegenerative disorders. This type of nano-formulation and administration route may also pave the way to the development of other platforms able to deliver a wide range of drugs into the brain in a controlled manner, for the treatment of various brain diseases (such as brain tumours, Alzheimer’s, Epilepsy).