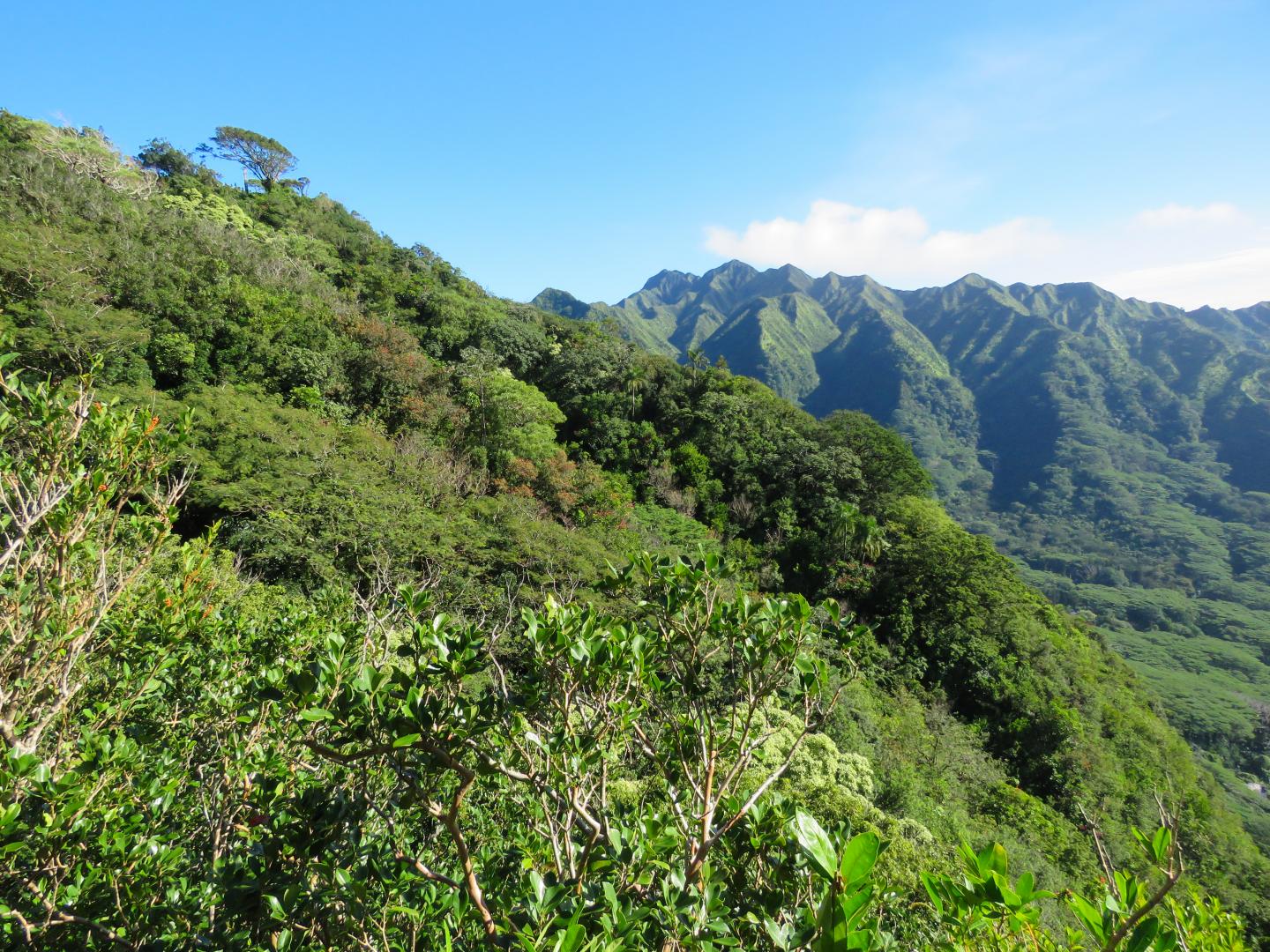 On the Hawaiian island of Oahu, it is possible to stand in a lush tropical forest that doesn’t contain a single native plant. The birds that once dispersed native seeds are almost entirely gone, too, leaving a brand-new ecological community composed of introduced plants and birds.

In a first-of-its-kind study published today (April 4) in the journal Science, researchers — including Assistant Professor Corey Tarwater and Research Scientist J. Patrick Kelley of the University of Wyoming’s Department of Zoology and Physiology — demonstrate that these novel communities are organized in much the same way as native communities worldwide.

“These birds on Oahu aren’t interacting with these invasive plants randomly. They’re actually selecting certain plants. What’s interesting about this is that these birds didn’t co-evolve with these plants. We think of specialization as a co-evolved trait that develops over millennia, but we are seeing it in completely novel ecosystems and in species that have only lived together for less than 100 years,” says Jinelle Sperry, wildlife biologist for the U.S. Army Engineer Research and Development Center, adjunct professor in the Department of Natural Resources and Environmental Sciences (NRES) at the University of Illinois, and co-author of the Science study.

“Many folks told us that the networks of species interactions would have little or no structure, owing to the recency of colonization by these nonnative bird and plant species,” says Kelley, who also teaches in UW’s Honors College. “So, our results were very surprising and force us to rethink how fast nonnative species can become integral parts of the ecosystem.”

Tarwater and Kelley are co-founders of the Hawaii VINE (Vertebrate Introductions and Novel Ecosystems) Project and co-principal investigators on the work in Hawaii. The research included capturing more than 3,000 birds and sorting through fecal samples from seven sites.

“This study shows again how studying multiple sites can illuminate our understanding of how and why we see certain ecological patterns. Without such a study design, we would not know how different groups of species, their abilities to switch partners and rainfall contribute to differences in networks,” Kelley says. “Of course, it took an awesome amount of effort on behalf of field assistants, graduate students and lab technicians. They helped discover something new and exciting that we’ll be building on in the months and years to come.”

Hawaii is the extinction and invasion capital of the world. This means that in the majority of areas, there are novel communities of plants and animals interacting with each other. In Hawaii and other tropical regions, the majority of plants rely on vertebrates to disperse their seeds. The issue in Hawaii is that almost all native dispersers have gone extinct, and what is left is a suite of invasive dispersers that did not evolve with the native plants. There also are many invasive plants that may be competing with native plants for the dispersers.

The researchers tested the stability of bird-plant interactions on Oahu by simulating the extinction of plant species.

“We were trying to determine how fast the birds would go extinct if you remove plants in a given sequence. I simulated this for Oahu and native-dominated communities and compared,” says Jeferson Vizentin-Bugoni, lead author of the study and postdoctoral researcher with the U.S. Army Engineer Research and Development Center and NRES. “The rates at which Oahu communities collapsed in the simulations were very similar to native communities. This means that now these novel networks in Hawaii are as stable as native-dominated communities.”

Although the results could be interpreted as a silver lining to the ever-increasing threat of invasive species and extinctions, the researchers call for caution. First, there’s the fact that they didn’t find evidence of a single native bird consuming a single native seed.

“Because all native fruit-eating birds are extinct on Oahu, we knew chances were low that we’d find native birds consuming native seeds,” Sperry says. “But to have caught that many birds over three years and not have found a single native interaction is pretty astounding.”

Rather than consuming native seeds, introduced birds are predominantly eating and spreading invasive plants around the island, compounding an already hard-to-solve problem, the study showed.

Vizentin-Bugoni says, “Introduced birds are acting as a double-edged sword. Because there are no native dispersers left, they are the only hope left for native plants but, at the same time, they are dispersing a lot of introduced plants.”

Interestingly, the birds ate different groups of invasive plants in different locations on the island. This ability to “partner switch” has important implications for restoration, Sperry says.

“These birds are really flexible in what they’ll consume, but across sites, they’re primarily eating invasive plant species. Because of that, in restored sites, we need to really entice birds to eat native fruits. They’re the only ones left to help move seeds of native plants. We need to use active management and multiple restoration tools or we won’t have a self-sustaining restoration,” she notes.

Finally, although the novel community might have some of the same properties as a native system, the researchers stress it is not the same. Importantly, the community is dramatically less diverse. Study results indicate just four bird species are responsible for moving the bulk of the plants around the island.

“Because of the large number of invasive plants and the absence of large dispersers, the invasive dispersers are incompletely filling the role of extinct native dispersers, and many native plants are not being dispersed,” Tarwater says. “This means without active management, the Oahu forests will continue to be transformed into an invasive-dominated landscape, with only a few native plants holding on.”

Before Hawaii became the extinction and species-invasion capital of the world, its ecological communities were much more diverse. Experts estimate that in the last 700 years, 77 species and subspecies of birds in the Hawaiian Archipelago have gone extinct, accounting for 15 percent of bird extinctions worldwide.

“Many Hawaiian communities now lack birds with the appropriate beak shapes or sizes to consume seeds of certain native plants. Those plants are out of luck with regards to dispersal,” says Jason Gleditsch, a co-author on the study and doctoral student in NRES.

“Because Hawaii is so isolated, there were endemic species you could only find there. These species that were like diamonds in the tree of life now have been replaced by … soda cans. The surprise for us is how these soda cans are rearranging and it’s still working, but we lost almost all the diamonds,” Vizentin-Bugoni says. “Once they’re gone, they’re gone. And we lose not only biodiversity but also the potential of those species to benefit humans, such as production of new medicines from plants, for instance.”

Scienmag May 23, 2019
Credit: Dan Addison | University of Virginia Communications A groundbreaking research collaboration at the…

The reasons behind aerosol pollution over the eastern slope of the…