The cognitive decline and memory loss observed in Alzheimer’s disease (AD) is attributed to the accumulation of β-amyloid protein (Aβ), which impairs neural function in the brain. Experimentation has shown that oxytocin, a peptide hormone primarily responsible for parturition, bonding, and lactation, also regulates cognitive behavior in the rodent central nervous system (CNS). This finding, along with the identification of oxytocin receptors in CNS neurons, has spurred interest in the potential role of oxytocin in reversing memory loss tied to cognitive disorders like AD. 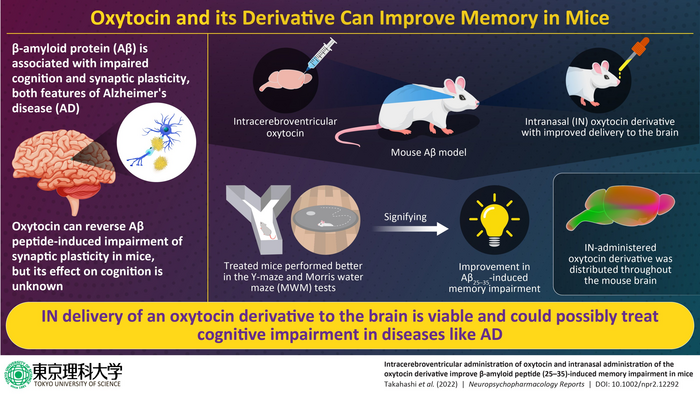 The cognitive decline and memory loss observed in Alzheimer’s disease (AD) is attributed to the accumulation of β-amyloid protein (Aβ), which impairs neural function in the brain. Experimentation has shown that oxytocin, a peptide hormone primarily responsible for parturition, bonding, and lactation, also regulates cognitive behavior in the rodent central nervous system (CNS). This finding, along with the identification of oxytocin receptors in CNS neurons, has spurred interest in the potential role of oxytocin in reversing memory loss tied to cognitive disorders like AD.

However, peptides like oxytocin are characterized by weak blood-brain barrier permeability, and so can only by efficiently delivered to the brain via intracerebroventricular (ICV) administration. ICV, however, is an invasive technique which is impractical to implement clinically.

Delivering peptides to the CNS via intranasal (IN) administration is a viable clinical option. Prof. Chikamasa Yamashita at Tokyo University of Science recently patented a method to increase the efficiency of peptide delivery to the brain, by introducing cell-penetrating peptides (CPPs) and a penetration accelerating sequence (PAS) through structural modifications. Previous work had confirmed that both CPPs and the PAS benefit the nose-to-brain delivery pathway. Now, a group of researchers, led by Prof. Akiyoshi Saitoh and Prof. Jun-Ichiro Oka, leveraged this approach to prepare an oxytocin derivative: PAS-CPPs-oxytocin. Their findings were published online in Neuropsychopharmacology Reports on 19 September 2022.

“We have previously shown that oxytocin reverses amyloid peptide (25-35) (A25-35)-induced impairment of synaptic plasticity in rodents. We wanted to see if PAS-CPPs-oxytocin could be delivered more efficiently to the mouse brain for clinical application, and if it improved cognitive functional behavior in mice,” states Prof. Oka.

The group first developed an A25-35 peptide-induced amnesia model by supplying A25-35 to the mouse brain using ICV delivery. During the course of the study, the spatial working and spatial reference memories of these mice were evaluated using the Y-maze and Morris water maze (MWM) tests. After confirming that memory was affected in A25-35-impaired mice, PAS-CPPs-oxytocin and native oxytocin were administered using the IN and ICV routes respectively, to see if learning and memory improved in the treated mice. Finally, the distribution of the IN-administered oxytocin derivative in brain tissue was profiled by imaging of a fluorescent-tagged oxytocin derivative.

The results of this study were quite promising! The tagged PAS-CPPs-oxytocin showed distribution throughout the mouse brain following its IN administration. While the ICV administration of native oxytocin improved test outcomes in both the Y-maze and MWM tests, the IN administered PAS-CPPs-oxytocin yielded memory improving effects in the Y-maze test. Hailing the team’s discovery, Prof. Oka says, “My team is the first to show that the oxytocin derivative can improve the A25-35-induced memory impairment in mice. This suggests that oxytocin may help reduce the cognitive decline we see in Alzheimer’s disease.”

Why are these findings clinically useful? Prof. Oka explains the broader implications of their work, “The oxytocin derivative enters the brain more efficiently. Furthermore, since IN delivery is a non-invasive procedure, this modified version of the hormone could potentially be a clinically viable treatment for Alzheimer’s disease.”

About Professor Akiyoshi Saitoh from Tokyo University of Science
Dr. Akiyoshi Saitoh earned his PhD from Hoshi University and is a Professor in the Department of Pharmaceutical Sciences at Tokyo University of Science. His research group is involved in predicting adverse effects of illicit drugs, developing novel psychotropic drugs targeting opioid receptors, and using emotional neural circuits to develop pathological models and novel therapeutic agents. He has published over 100 peer-reviewed articles since starting out in the field of neuropsychopharmacological science in 1994. He conducts joint research with the University of Tsukuba, McGill University, Jikei University School of Medicine, National Center of Psychiatry and Neurology, and Kitasato University.

About Professor Emeritus Jun-Ichiro Oka from Tokyo University of Science
Dr. Jun-Ichiro Oka earned his doctorate in Neuropharmacology from The University of Tokyo in 1980. In his long association with Tokyo University of Science, which started in 2000, he was a Professor in the Department of Pharmaceutical Sciences. Prof Oka has over 140 publications to his credit, and has vast experience in the field of neuropharmacology, particularly in depression, dementia, and intranasal delivery of peptides to the brain.

Funding information
The study received funding from JSPS KAKENHI (Grant No.: 15K07974 to J-I.O.); the Mochida Memorial Foundation for Medical and Pharmaceutical Research (2015 to S.S-H.); the MEXT-Supported Program for the Strategic Research Foundation at Private Universities (2014-2018 to J.-I.O.); and the Grant-in-Aid for JSPS Fellows (Grant No.: JP-21J20036 to J.T.).