A research group led by scientists at the University of São Paulo (USP) in São Carlos, Brazil, has identified a number of bioactive compounds in a marine sponge collected on Fernando de Noronha, an archipelago about 400 km off the coast of Brazil’s Northeast region. Some of the substances proved capable of killing bacteria that are resistant to currently available antibiotics, paving the way to development of new drugs. 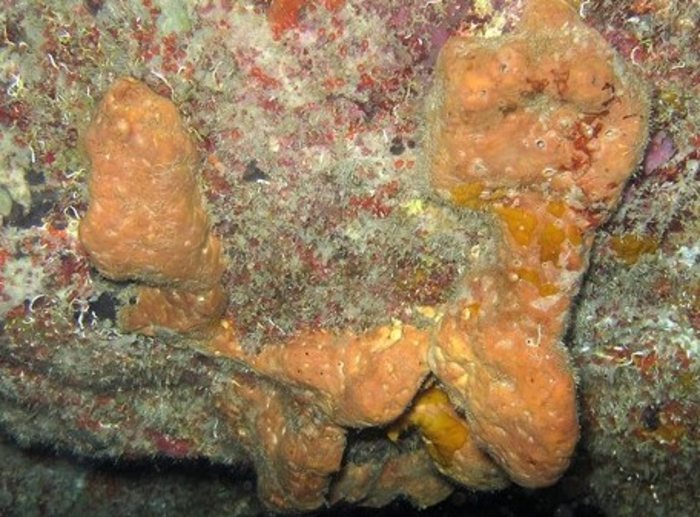 A research group led by scientists at the University of São Paulo (USP) in São Carlos, Brazil, has identified a number of bioactive compounds in a marine sponge collected on Fernando de Noronha, an archipelago about 400 km off the coast of Brazil’s Northeast region. Some of the substances proved capable of killing bacteria that are resistant to currently available antibiotics, paving the way to development of new drugs.

The study was supported by FAPESP and reported in an article published in the Journal of Natural Products.

“This marine sponge had been studied previously by groups outside Brazil, mainly in the 1990s. We used next-generation techniques to analyze substances from its secondary metabolism, look for new molecules, and test its biological activity. We were able to describe a number of novel compounds. The main potential detected was against drug-resistant bacteria,” said Vítor Freire, who conducted the study as part of his PhD research at the São Carlos Institute of Chemistry (IQSC-USP).

Resistance to antibiotics is considered a major global public health problem by the World Health Organization (WHO). According to a report commissioned by the British government and published in 2016, deaths due to infections by drug-resistant bacteria are set to reach 10 million per year in 2050. Hence the importance of discovering effective novel antibiotics.

The marine sponge analyzed in the study is Agelas dispar, a species native to the Caribbean and part of the Brazilian coast. Marine sponges are among the oldest organisms on Earth and spend their lives anchored to reefs or the seabed. In millions of years of evolution, they have developed a complex metabolism, producing substances required for competition with other invertebrates and to avoid infection by pathogenic bacteria.

The substances with the most therapeutic potential identified in the study were three different types of ageliferin, named after the marine sponge genus Agelas.

“Another important factor is the ability of sponges to store symbiont microorganisms, which also help them defend themselves. When we analyze compounds found in sponges, we don’t always know what’s been produced by them and what comes from symbionts,” said Roberto Berlinck, a professor at IQSC-USP and principal investigator for the study.

The research was conducted as part of two projects led by Berlinck and supported by FAPESP (grants 19/17721-9 and 13/50228-8, the latter under the aegis of BIOTA-FAPESP, the FAPESP Research Program on Biodiversity Characterization, Conservation, Restoration and Sustainable Use).

The trials involving bacteria were performed at Adolpho Lutz Institute (IAL), the reference laboratory for epidemiological surveillance in São Paulo state, and led by André Gustavo Tempone, a researcher also supported by FAPESP.

Thirteen compounds were tested on an ovarian cancer cell line known as OVCAR3 but were not found to be biologically active. Other research groups that tested ageliferins on lung, colon and breast cancer cells did not observe anti-tumor action, and one had no effect on lymphoma cells. However, three ageliferins eliminated drug-resistant bacteria Escherichia coli and Enterococcus faecalis, which are extremely common and found in various environments as well as the human body; and Staphylococcus aureus, Klebsiella pneumoniae, Acinetobacter baumannii and Pseudomonas aeruginosa, listed by WHO as priority targets for novel antibiotics and among the bacteria responsible for most hospital-acquired infections.

The researchers wanted to know whether the use of these ageliferins could lead to destruction of red blood cells (hemolysis) in the intestines, a potentially lethal side effect often seen in patients undergoing chemotherapy who need antibiotics. In murine cells, the compounds did not cause this kind of damage, suggesting promising drug development potential.

The next step is to analyze other marine sponges using the same methodology. “Finding out how these substances are produced is extremely important as they’re distributed by several classes of sponge and could help treat diseases in future,” said Freire, currently a postdoctoral researcher at the National Cancer Institute in the United States.