Carbon dioxide or CO2 can potentially be used as a feedstock to be converted into carbon-neutral ‘solar fuels’ that store energy from the sun. But for them to be competitive with fossil fuels, the chemical reaction that performs this conversion needs much more efficient catalysts. Researchers have recently come up with a photocatalyst structure involving isolated single atoms of copper in a polymer framework that radically enhances catalyst performance. 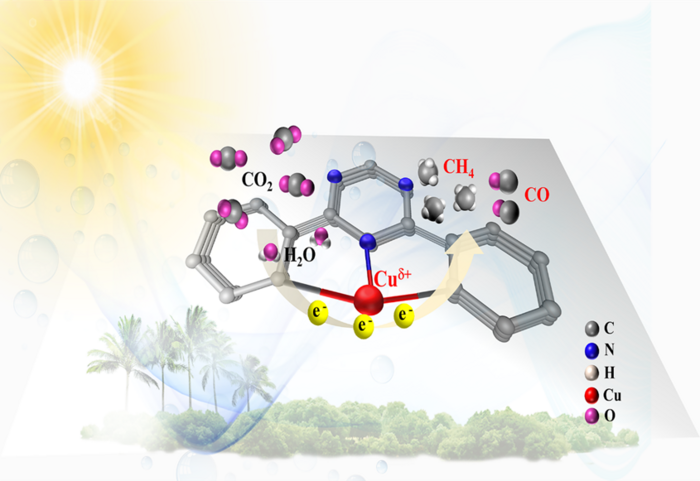 Carbon dioxide or CO2 can potentially be used as a feedstock to be converted into carbon-neutral ‘solar fuels’ that store energy from the sun. But for them to be competitive with fossil fuels, the chemical reaction that performs this conversion needs much more efficient catalysts. Researchers have recently come up with a photocatalyst structure involving isolated single atoms of copper in a polymer framework that radically enhances catalyst performance.

There are a number of sectors, such as long-haul shipping and aviation, which are difficult to electrify and so in the battle to mitigate climate change, some form of carbon-neutral fuel will need to be developed. Meanwhile, solar power may be low-carbon, but is weather-dependent. Sometimes there is not enough electricity being produced and at other times too much.

An elegant solution that could ameliorate both problems is the conversion of solar energy into synthetic fuels. By drawing down atmospheric CO2 and using it as a feedstock combined with hydrogen produced by the splitting of water molecules, carbon-neutral versions of hydrocarbons can be produced in a factory. This in effect stores solar energy for use later when the sun is not shining or as a clean fuel that works in hard-to-electrify sectors (and beyond).

However, one of the great challenges facing this solar-to-fuels vision that mimics how plants turn sunlight into energy, is increasing the efficiency of the chemical reactions involved enough to make the end product cost competitive with dirty fossil fuels.

Key to achieving such efficiencies is producing better catalysts, substances that speed up the chemical reaction. The main aim has been to maximise the concentration of sites on catalyst molecules where a reaction can take place to improve efficiency while also reducing waste.

In the last decade or so, the catalyst research community has increasingly turned its attention to single-atom catalysts (SACs) with the aim of giving a major boost to all sorts of industrial processes, not just the photocatalysis needed by solar-to-fuels. SACs are catalysts where all of the metal atoms involved in the reaction exist as isolated single atoms dispersed on a solid supporting framework. These single metal atoms are also typically positively charged. As a result of this unusual geometric and electronic structure, SACs can radically enhance catalysis efficiency.

The field of SAC research and development has exploded in recent years thanks largely due to the arrival of advanced imaging and x-ray spectroscopic methods. These have allowed chemists to produce highly detailed images of SACs in action—even as the reaction is taking place, which allows them to better understand what is happening and test novel hypotheses. Alongside this, modern techniques of chemical synthesis have permitted construction of very finely tailored SACs appropriate to a desired process.

“Many different SACs for other chemical reactions have been developed in recent years, delivering a revolution in catalytic performance,” said Jiangwei Zhang, a co-author of the paper and a chemical physicist with the Advanced Chemical Engineering and Energy Materials Research Center at the China University of Petroleum in Qingdao, “and now it was the turn of photocatalysts for solar fuel production.”

The researchers constructed a SAC with a covalent triazine-based framework (CTF) structure that anchors single copper atoms. CTFs are a relatively new class of polymers (strings of very large molecules) that had already been shown to boost photocatalytic water splitting performance. By combining CTFs with single copper atoms, the chemists aimed to deliver a highly porous structure (to enhance the number of sites available where the relevant chemical reaction can take place) and deliver maximum atomic efficiency. They call this formulation Cu-SA/CTF.

With this information, the researchers were then able to test the performance of the Cu-SA/CTF photocatalysts and investigate what was happening at the atomic level. They found that the addition of the single copper atoms to the structure had endowed the catalysts with an increased ability to adsorb CO2 (stick the CO2 to itself to perform the chemical reaction), and strengthened the response to the visible light driving the process, as well as delivering a number of other improvements. Together, this worked to significantly enhance the conversion of CO2 and water into methane fuel.

As a result, the researchers were able to develop guidelines for designing on the atomic scale other robust photocatalysts for conversion of CO2 into other useful substances.

Nano Research is a peer-reviewed, international and interdisciplinary research journal, sponsored by Tsinghua University and the Chinese Chemical Society. It offers readers an attractive mix of authoritative and comprehensive reviews and original cutting-edge research papers. After more than 10 years of development, it has become one of the most influential academic journals in the nano field. Rapid review to ensure quick publication is a key feature of Nano Research. In 2020 InCites Journal Citation Reports, Nano Research has an Impact Factor of 8.897 (8.696, 5 years), the total cites reached 23150, and the number of highly cited papers reached 129, ranked among the top 2.5% of over 9000 academic journals, ranking first in China’s international academic journals.