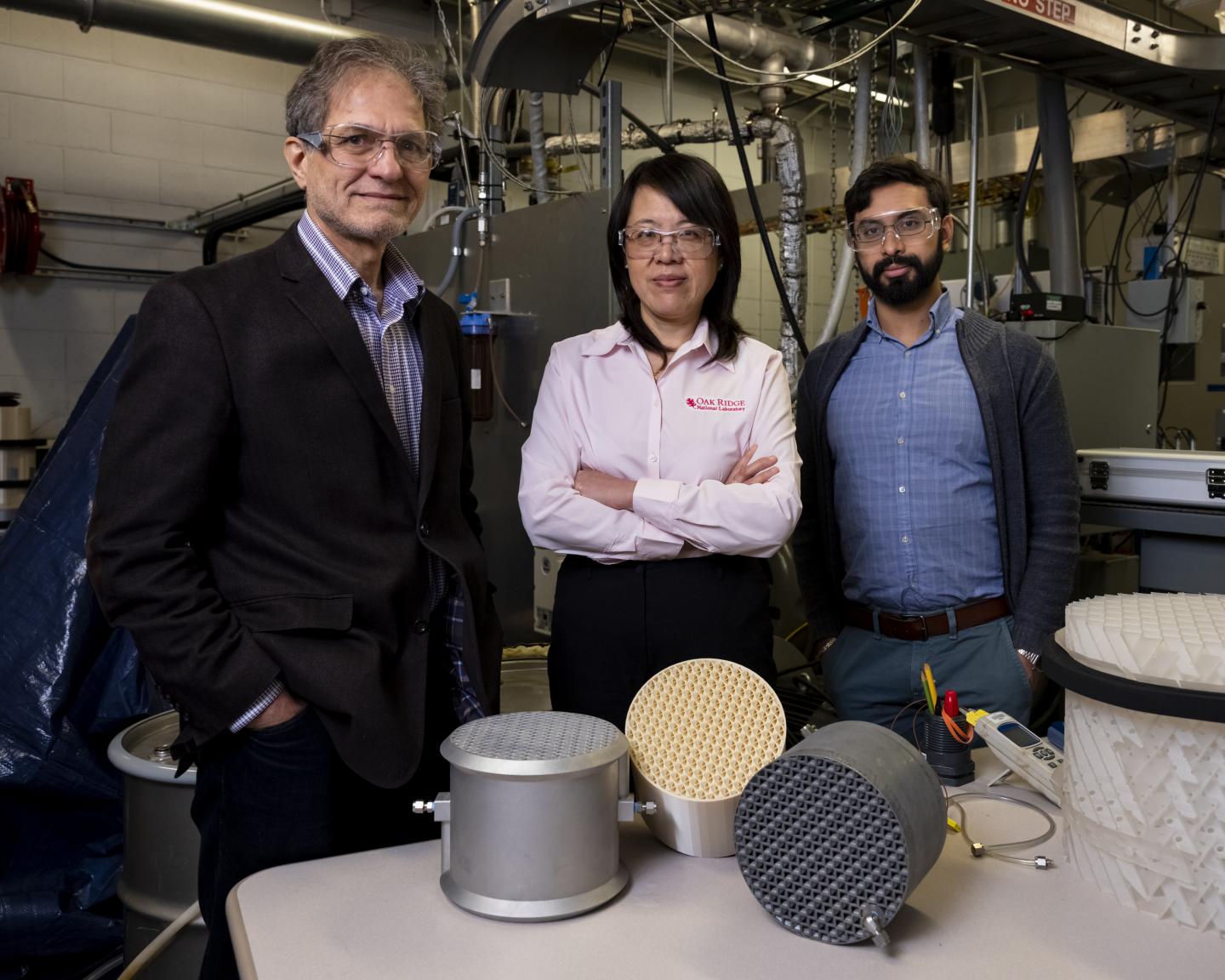 The Department of Energy’s Oak Ridge National Laboratory researchers have designed and additively manufactured a first-of-its-kind aluminum device that enhances the capture of carbon dioxide emitted from fossil fuel plants and other industrial processes.

The team tested the novel circular device, which integrates a heat exchanger with a mass-exchanging contactor, inside a 1-meter-tall by 8-inch-wide absorption column consisting of seven commercial stainless-steel packing elements. The 3D-printed intensified device was installed in the top half of the column between the packing elements.

Additive manufacturing made it possible to have a heat exchanger within the column, as part of the packing elements, without disturbing the geometry, thus maximizing the contact surface area between the gas and liquid streams.

“We call the device intensified because it enables enhanced mass transfer (the amount of CO2 transferred from a gas to a liquid state) through in-situ cooling,” said Costas Tsouris, one of ORNL’s lead researchers on the project. “Controlling the temperature of absorption is critical to capturing carbon dioxide.”

ORNL’s device focuses on a key challenge in conventional absorption of carbon using solvents: the process typically produces heat that can limit its overall efficiency. By using additive manufacturing, researchers were able to custom design a multifunctional device that greatly improves the process efficiency by removing excess heat while keeping costs low.

Absorption, one of the most commonly used and economical methods for capturing CO2, places a flue-gas stream from smokestacks in contact with a solvent, such as monoethanolamine, known as MEA, or other amine solutions, that can react with the gas.

When CO2 interacts with the solvent, it produces heat that can diminish the capability of the solvent to react with CO2. Reducing this localized temperature spike in the column through cooling channels helps increase the efficiency of CO2 capture.

“Prior to the design of our 3D printed device, it was difficult to implement a heat exchanger concept into the CO2 absorption column because of the complex geometry of the column’s packing elements. With 3D printing, the mass exchanger and heat exchanger can co-exist within a single multifunctional, intensified device,” said ORNL’s Xin Sun, the project’s principal investigator.

Embedded coolant channels were added inside the packing element’s corrugated sheets to allow for heat exchange capabilities. The final prototype measured 20.3 centimeters in diameter, 14.6 centimeters in height, with a total fluid volume capacity of 0.6 liters. Aluminum was chosen as the initial material for the intensified device because of its excellent printability, high thermal conductivity, and structural strength.

“The device can also be manufactured using other materials, such as emerging high thermal conductivity polymers and metals. Additive manufacturing methods like 3D printing are often cost-effective over time because it takes less effort and energy to print a part versus traditional manufacturing methods,” said Lonnie Love, a lead manufacturing researcher at ORNL, who designed the intensified device.

The prototype demonstrated that it was capable of substantially enhancing carbon dioxide capture with the amine solution, which was chosen because its highly reactive to CO2.

Both experiments produced substantial improvements in the carbon capture rate and demonstrated that the magnitude of the capture consistently depended on the gas flow rates. The study also showed a peak in capture at 20% of carbon dioxide concentration, with percent of increase in capture rate ranging from 2.2% to 15.5% depending on the operating conditions.

The work was sponsored by DOE’s Office of Fossil Energy.

ORNL is managed by UT-Battelle for the U.S. Department of Energy’s Office of Science, the single largest supporter of basic research in the physical sciences in the United States. DOE’s Office of Science is working to address some of the most pressing challenges of our time. For more information, please visit https://energy.gov/science.