No super-Drosophila: Vinegar fly species have a good vision or olfaction, but not both 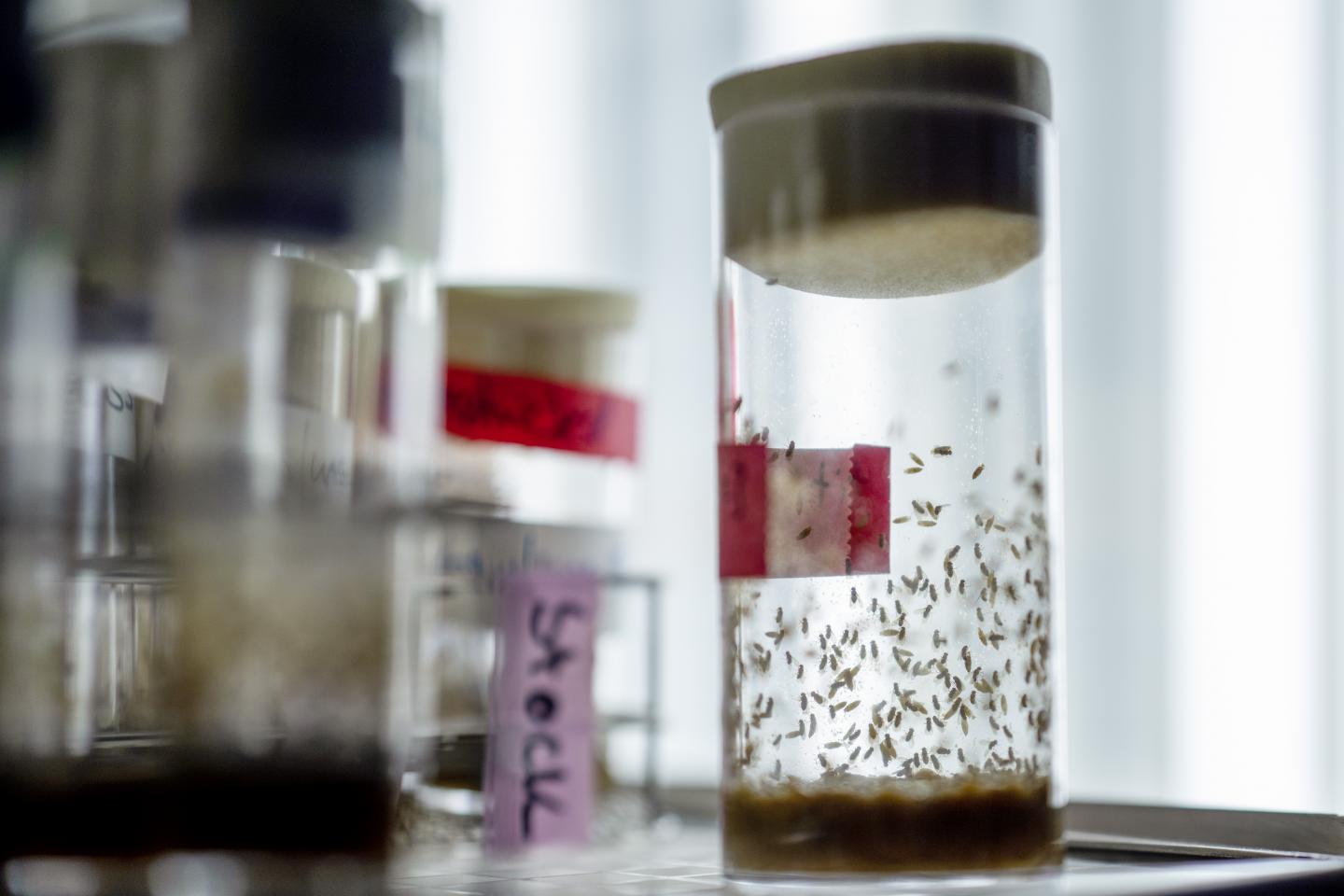 The authors such as Ian Keesey, Markus Knaden and Bill Hansson had observed different behavior in earlier studies on the black-bellied vinegar fly Drosophila melanogaster and the cherry vinegar fly Drosophila suzukii, a relatively new pest in Central Europe: while D. melanogaster are more likely to be attracted by just the smell of food, in D. suzukii vision also played an important role in foraging. These behavioral preferences were also reflected in the different sizes of the respective sensory organs. Based on this observation, the scientists hypothesized that the variation in vision and olfaction is the result of a so-called trade-off. With this term, biology describes when a beneficial change in one trait is linked to a detrimental change in another trait in the adaptation to the environment. In the case of the genus Drosophila, such a trade-off seems to take place in the expression of visual and olfactory organs.

In order to test their tradeoff hypothesis, the researchers examined the forms and functions of eyes and antennae as well as the associated visual and olfactory brain structures of a total of 62 Drosophila species: “The genus Drosophila offered us a much greater variation in sensory expression than we anticipated within a single closely related group of insects. And indeed, big-eyed species showed small noses or antennae, while species with larger antennae had proportionally smaller eyes,” says lead author Ian Keesey. The size of the sense organs, in turn, reflects the preferences related to selecting a host plant or a mate. Big-nose flies are more likely to use olfactory cues, while big-eyed flies are more likely to follow visual cues.

“The detailed analysis of eyes and antennae revealed the whole spectrum of the trade-off between vision and olfaction: we found species that had invested primarily in vision, species where vision and olfaction are about equal, and species that rely primarily on their olfactory sense, but none of the species studied had both large eyes and large antennae, ” explains Markus Knaden. For their analyses, the researchers reconstructed the primary sensory brain structures that play a role in vision and olfaction, including the optic and antennal lobes. In addition, they used high-resolution microscopy to take a closer look at the sensory organs of the various fly species. “One reason why animals have to choose either a well-developed olfactory system or vision might be that in embryonic development both sensory organs emerge from the same structure with only a limited number of nuclei. The competition for resources, which decides which of the two sensory organs is more pronounced, thus takes place at a very early stage of development,” says Bill Hansson, head of the Department of Evolutionary Neuroethology.

An important finding of the study is that genetic traits are linked. A change in one trait can have a large impact on the organism. However, some properties are less easy to modify, especially when tethered together with another. “It is fascinating that two senses so well studied, such as vision and olfaction, are inversely correlated. We now suspect that evolutionary pressures exist that are driving insects to prioritize the eye or the nose,” says Ian Keesey.

With their study, the scientists want to open new avenues in the so-called Eco-Evo-Devo research. This research field is based on the assumption that concepts of ecology (eco), evolution (evo) and developmental biology (devo) are tightly linked, and the understanding of ecological relationships also requires evolutionary and developmental knowledge and vice versa. Although genomic data are available for many species, knowledge of their ecology is often lacking. “These trade-offs, especially in genetic model organisms, provide an avenue for determining the mechanisms for how ecology and evolution shape the natural world,” says Ian Keesey.

The scientists also want to encourage other research groups not to look only at the well-known Drosophila melanogaster, but to include more species of this genus in their studies. The extensive datasets of this study are all available in the Max Planck database Edmond and researchers are welcome to use them for comparisons with other Drosophila species of the entire genus.

Insilico to present at the World AI Show