No stone unturned: An extensive search for cation substitution in lithium-ion batteries 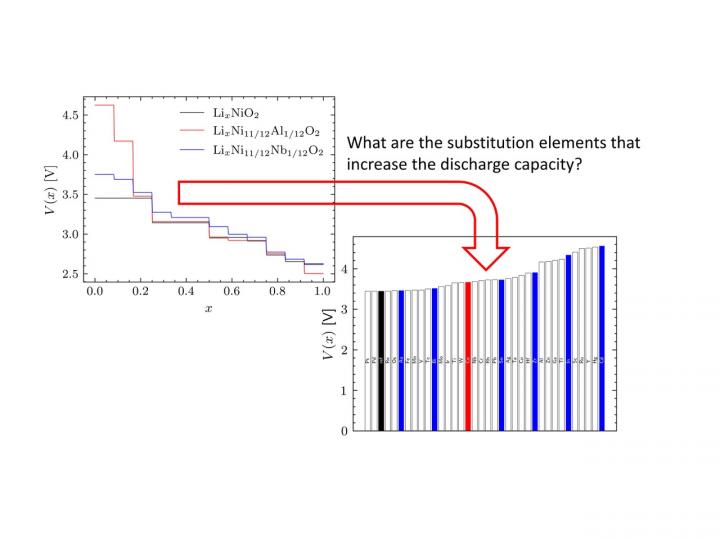 Ishikawa, Japan – Powering everything from smartphones to electric cars, lithium-ion batteries (LIBs) have evolved markedly with advances in technology and revolutionized our world. The next step in the progress of technology is developing even better batteries to power electronic devices for longer durations. One promising technique for increasing battery performance involves the atomic substitution of positively charged ions or “cations” in the cathode material. However, doing so systematically for different substituent cations to determine the ideal ones experimentally is complex and expensive, leaving us with simulations as the only viable option for narrowing down the choices.

Several studies have reported an improved battery life and thermal stability based on their findings using a simulation-based approach. However, such improvements have, in turn, lowered the discharge capacity of the battery, which is the amount of energy that a battery can supply in a single discharge. As a result, an extensive search must be performed for the cation substituent that enhances the discharge capacity.

Against this backdrop, a team of scientists led by Prof. Ryo Maezono from Japan Advanced Institute of Science and Technology (JAIST) conducted an extensive screening of different cations for partial substitution of nickel in a nickel-based LIB with the intent of enhancing the battery discharge capacity.

“The discharge capacity can be determined using the discharge profile, which is the voltage change during the charge-discharge process,” explains Prof. Maezono. “We used first-principles calculations to evaluate the discharge profiles of materials that, in turn, determines their discharge capacities. However, these calculations are computationally costly, so we integrated other methods to narrow down the candidates for cation replacement. To the best of our knowledge, this is the first study that successfully predicts cation substitution to increase battery capacity.” The groundbreaking study has been published in a recent issue of The Journal of Physical Chemistry C.

A prominent strategy for successfully predicting the discharge voltage profile is the “strongly constrained and appropriately normed” (SCAN) functional. However, due to the large computing costs involved, such methods are impractical for extensive screening. So, the team began by using relatively inexpensive techniques such as density functional theory and cluster expansion to identify suitable candidates for cation replacement and then applied SCAN functional to the inferred candidates to assure reliability and accuracy in voltage predictions.

The screening process revealed that the highest discharge capacity was obtained when nickel was partially substituted with platinum and palladium in nickel-based LIB. These results were consistent with the experimental data, validating the proposed methodology.

While Prof. Maezono emphasizes the need for additional research, he is optimistic about the future of their low-cost screening process. “Our findings indicate that substituents such as rhenium and osmium offer high discharge capacities. However, these elements are rare and costly, and putting them to practical use would be challenging. Further study is needed to achieve the same effect with less substitution, multiple element substitution, or anion substitution,” he says. “Having said that, our novel computational technique will accelerate the search for optimal materials that improve battery performance at lower costs, allowing us to replace the bulk of our current electricity sources with carbon-free alternatives.”

Hopefully, such advances will bring humankind one step closer to becoming an environment-friendly species in the near future!

Founded in 1990 in Ishikawa prefecture, the Japan Advanced Institute of Science and Technology (JAIST) was the first independent national graduate school in Japan. Now, after 30 years of steady progress, JAIST has become one of Japan’s top-ranking universities. JAIST counts with multiple satellite campuses and strives to foster capable leaders with a state-of-the-art education system where diversity is key; about 40% of its alumni are international students. The university has a unique style of graduate education based on a carefully designed coursework-oriented curriculum to ensure that its students have a solid foundation on which to carry out cutting-edge research. JAIST also works closely both with local and overseas communities by promoting industry-academia collaborative research.

About Professor Ryo Maezono from Japan Advanced Institute of Science and Technology, Japan

Dr. Ryo Maezono has been a Professor at the School of Information Science at the Japan Advanced Institute of Science and Technology (JAIST) since 2017. He earned his PhD from the University of Tokyo in 2000 and worked as a researcher at the National Institute for Materials Science in Ibaraki, Japan from 2001 to 2007. His research areas include material informatics and condensed matter theory using high-performance computing. He is a senior researcher with 101 papers and 1519 citations to his name.