No small measure: probing the mechanics of gold contacts at the nanoscale

Ishikawa, Japan — Miniaturization lies at the heart of countless technological advances. It is undeniable that as devices and their building blocks get smaller, we manage to unlock new functionalities and come up with unprecedented applications. However, with more and more scientists delving into materials with structures on the atomic scale, the gaps in our current understanding of nanomaterial physics are becoming more prominent. 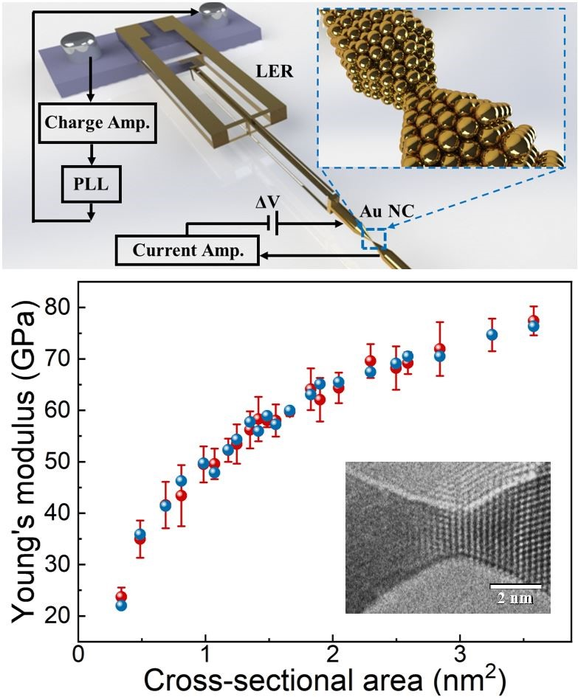 Ishikawa, Japan — Miniaturization lies at the heart of countless technological advances. It is undeniable that as devices and their building blocks get smaller, we manage to unlock new functionalities and come up with unprecedented applications. However, with more and more scientists delving into materials with structures on the atomic scale, the gaps in our current understanding of nanomaterial physics are becoming more prominent.

For instance, the nanomaterial’s surface represents one such knowledge gap. This is because the influence of surface quantum effects becomes much more apparent when the surface-to-volume ratio of a material is high. In nanoelectromechanical systems (NEMS), a current hot topic in research, the physical properties of the nanomaterials greatly differ from their bulk counterparts when their size is reduced to a few atoms. A solid understanding of the mechanical properties of nanowires and nanocontacts—integral components of NEMS—is essential for advancing this technology. But, measuring them has proven a challenging task.

Against this backdrop, a research team from Japan recently achieved an unprecedented feat when they managed to precisely measure the elastic modulus of gold nanocontacts stretched down to a few atoms. The study, published in Physical Review Letters, was led by Prof. Yoshifumi Oshima of Japan Advanced Institute of Science and Technology (JAIST). The rest of the team included post-doctoral research fellow Jiaqi Zhang and Professor Masahiko Tomitori from JAIST, and Professor Toyoko Arai of Kanazawa University.

To observe the gold nanocontacts as they were mechanically stretched, the researchers used transmission electron microscopy (TEM) in ultrahigh vacuum. This was essential to ensure that the surface of the nanocontacts stayed perfectly clean during the measurements. Meanwhile, to accurately measure the Young’s modulus (a measure of stiffness) of the nanocontacts, the team resorted to an innovative technique they had previously developed. They put a quartz length-extension resonator (LER) in a TEM holder and attached one side of the nanocontact to it. In their setup, the resonant frequency changed depending on the “equivalent spring constant” of the gold nanocontact, which is related to the material’s Young’s modulus. “With our approach, which we named the ‘nanomechanics measurement method,’ we can accurately measure a nanomaterial’s equivalent spring constant while simultaneously observing it using TEM and measuring its electrical conductivity,” explains Prof. Oshima.

With this knowledge, the team demonstrated that the overall strength of gold nanocontacts is governed by the softness of their outermost surface layer. “Our findings clarify why the strength of a nanomaterial differs from that of bulk crystals depending on its size, and our approach allows us to estimate the Young’s modulus of any type of nanosized gold,” remarks Prof. Oshima. “Most notably, our results provide appropriate guidelines for the design and development of nanowires and nanosheets for NEMS. This could open doors to promising pressure, gas, and sound sensors, among other applications,” he adds.

Aside from NEMS, the team expects that their results, together with their measurement method, could have potential implications for chemistry since chemical reactions depend not only on the structure or the electronic state of the catalyst but also on atomic-scale vibrations on its surface. As these atomic vibrations are related to the material’s surface strength, it is possible that the proposed methodology could help us find new ways to control chemical reactions.

Let us hope future studies would elevate our understanding of nanomaterials even further.

Founded in 1990 in Ishikawa prefecture, the Japan Advanced Institute of Science and Technology (JAIST) was the first independent national graduate school in Japan. Now, after 30 years of steady progress, JAIST has become one of Japan’s top-ranking universities. JAIST counts with multiple satellite campuses and strives to foster capable leaders with a state-of-the-art education system where diversity is key; about 40% of its alumni are international students. The university has a unique style of graduate education based on a carefully designed coursework-oriented curriculum to ensure that its students have a solid foundation on which to carry out cutting-edge research. JAIST also works closely both with local and overseas communities by promoting industry–academia collaborative research.

About Professor Yoshifumi Oshima from Japan Advanced Institute of Science and Technology, Japan

Yoshifumi Oshima acquired Master’s and PhD degrees from Tokyo Institute of Technology, Japan, where he served as an Assistant Professor until 2010. He joined JAIST in 2014 as Associate Professor and was promoted to Full Professor in 2018. He specializes in nanomaterials, semiconductors, thin-film surfaces and interfaces, and nanophysics. His laboratory conducts pioneering work on nanophysics using in-situ transmission electron microscopy and data science. He has over 200 publications to his name, including papers, book chapters, and conference presentations.

This study was supported by JSPS KAKENHI (Grant numbers 18H01825 and 18H03879), a Sasakawa Scientific Research Grant from The Japan Science Society, and an Exchange Research Grant Project from Marubun Research Promotion Foundation.