No cell is an island 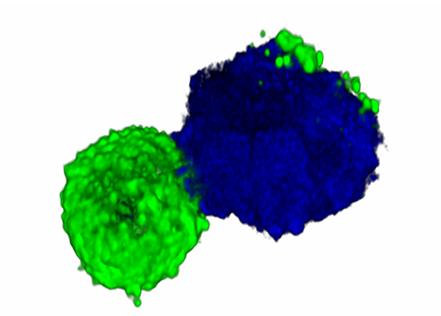 LA JOLLA, CA – Sorting through individual immune cells is a handy way to see how the body responds to disease. For years, researchers around the world have used a technique called flow cytometry to separate different types of immune cells, such as T cells, B cells and monocytes. But occasionally they’d see two cells stuck together as a “doublet.” Many regarded doublets as an artefact of the flow cytometry process, and it was common place to “dump” those conjoined cells before gathering data.

That was until scientists at the La Jolla Institute of Immunology (LJI) took a closer look at doublets and uncovered their link to disease. In a new study, published on June 25, 2019, in the journal eLife, the researchers report that higher levels of doublets can be found in people with severe cases of tuberculosis or dengue fever.

This finding shows that doublets are not simply technical artefacts of the flow cytometry process. Instead of ignoring these doublets, scientists could study them to predict disease progression and even vaccine effectiveness.

“It’s an important lesson learned,” says Bjoern Peters, Ph.D., a professor in the Vaccine Discovery Division at LJI and senior author of the new study. “By studying these cells and how they communicate, we might learn more about the immune system.”

The presence of doublets also explains cases where an immune cell appears to show gene expression of two distinct types of immune cells. Peters and his team have studied thousands of these odd “double expressors” and shown that these are actually doublets. “You look closer, and really it’s two cells,” says Peters.

The team was inspired to investigate doublets when they ran into a puzzling group of cells in blood samples from patients with tuberculosis. Their flow cytometry experiments revealed immune cells in these patients the characteristics of both monocyte cells and T cells. The scientists saw the same strange cells in patients with dengue fever.

Julie Burel, Ph.D., postdoctoral research fellow at LJI, realized that high levels of these double expressors correlated with a higher risk of disease progression in the patients. Her follow-up experiments showed that these cells were in reality doublets made up of a monocyte and a T cell stuck together.

The researchers then started looking for these doublets in more samples. They found that while recently infected patients tend to have more doublets, doublets appear to be surprisingly common in everyone. “Every blood sample we’ve analyzed contains doublets,” says Burel, who served as first author of the new study.

So why did it take so long to find them?

“Instrument sensitivity is a lot higher now, so we’re able to see things no one could see 10 years ago,” Peters says.

The presence of doublets makes complete sense if you consider the role of T cells in the body, Peters explains. “T cells are meant to monitor what’s going on in other cells, and detect and even kill infected cells –so it makes sense to study T cells that are found in complexes with other cells,” says Peters.

In tuberculosis and dengue fever, monocytes become reservoirs for disease, so T cells would be more likely to come in contact with monocytes and form doublets.

Peters says doublets are likely relevant in many other diseases. After all, infection prompts immune cells to communicate and interact more closely. That could mean they are more likely to form doublets.
“The immune system is a very complicated, social network,” says Burel. “Flow cytometry is meant to break cells apart, but actually, doublets matter.”

As Peters likes to put it, “no cell is an island.” The new research has inspired his lab to look beyond the single-cell analysis usually done with flow cytometry and instead gather more data on doublets.

One question is whether measuring doublets could allow researchers to detect disease before a patient even shows the symptoms. This could be critical for stopping fast-moving diseases such as dengue. Doublets could also indicate when a vaccine is sparking an effective immune response, which could help speed up vaccine research.

“Doublets could be a biomarker for any immune perturbation,” Burel says.

The Zika epidemic in Cuba, reflected by imported cases in Barcelona

Scienmag Jul 10, 2019
A study confirms the key role of imported disease clinics in the surveillance and prevention of arboviral diseases…