Developing biomaterials that enable the production of fully functional, human-scale tissues and organs capable of replacing failed organs would be a transformative benefit to society. 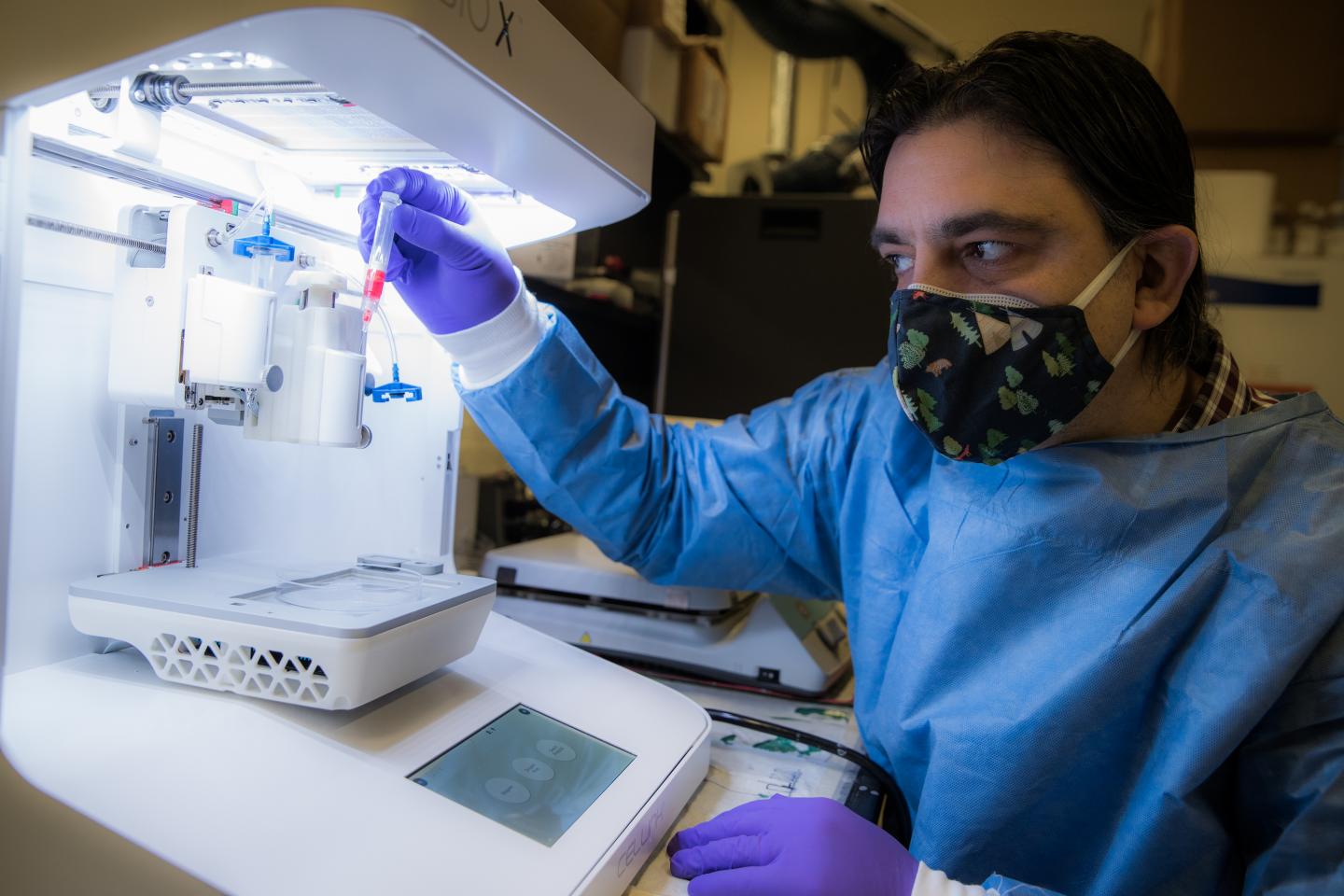 There is no sustainable cure at present for osteoarthritis, the most common chronic musculoskeletal disorder of the joints. And while joint replacements are successful treatments for older patients with already reduced mobility, they hold less promise for younger patients, with failure in the long-term nearly guaranteed. Biomaterial engineers propose another solution: restoring the damaged tissue itself.

“The gap between supply and demand for transplantable tissues and organs is continuously increasing,” says Murat Guvendiren, an assistant professor of chemical and materials engineering who is developing biomaterials designed to enable the production of fully functional, human-scale tissues and organs that are capable of replacing failed organs. Known as bioinks – hydrogels seeded with live human cells that are 3D-printed in the lab – these materials could potentially be used to construct highly complex and patient-specific tissues and organs, as well as tissue interfaces.

“Optimally, we would produce tissues and organs from a person’s own medical images and cells to manufacture personalized materials that would not be rejected,” adds Guvendiren. Backed by a National Science Foundation CAREER grant, he is currently focusing on the interface between cartilage and bone.

To date, bioinks cannot fully mimic the dynamic properties of native tissue, such as changes in stiffness and biochemistry, that take place in the body’s extracellular matrix during tissue development, disease progression and the healing process. In the body, cells sense their microenvironment and respond to these changes by regulating their behavior, including spreading into particular shapes, migrating and differentiating.

Guvendiren’s bioinks are what he calls “cell-instructive” materials that train stem cells to differentiate into different cell types in the right sequence to create a functional tissue. Their hydrogel casing, which is composed of a polysaccharide found in nature, including the body, functions as a supportive matrix for the cells that is “cured” into the desired structure with blue light. It will eventually degrade in the body as it is replaced by naturally produced extracellular matrix.

Along with the live cells, the bioink contains the peptides that will “tell the cells what to do,” as he puts it, and an adhesive compound that mimics a natural one, called fibronectin, that allows them to attach to the hydrogels.

Bioprinting the interface between cartilage and bone is difficult, because the tissues are so different: bone is hard, has a unique architecture and is threaded with blood vessels; cartilage is soft and has none. The cells that compose each must be created in a precise sequence.

“Our goal is to investigate the ability of our smart bioinks to create a cell-instructive material to regenerate bone with built-in vasculature that will gradually transition into cartilage using adult human mesenchymal stem cells, which is not possible with conventional fabrication techniques,” he explains.

More generally, he hopes to enable surgeons, for example, to customize biomaterials precisely for the task at hand, be it the repair or replacement of skin, cartilage, bone or cardiac tissue, and to establish a library of bioinks whose properties, such as stiffness, degradability and bioactivity (triggering cell growth), can be precisely adjusted with simple modifications of a particular bioink.

Recent projects include bioprinting blood vessel networks and using computer-aided design to create a gradient scaffold to help knit together damaged bone and cartilage at the interface where the two tissues rub against each other and wear each other down. Going forward, Guvendiren has proposed an outreach program with the New Jersey Commission for the Blind and Visually Impaired that will enhance STEM education accessibility for blind and visually impaired students.