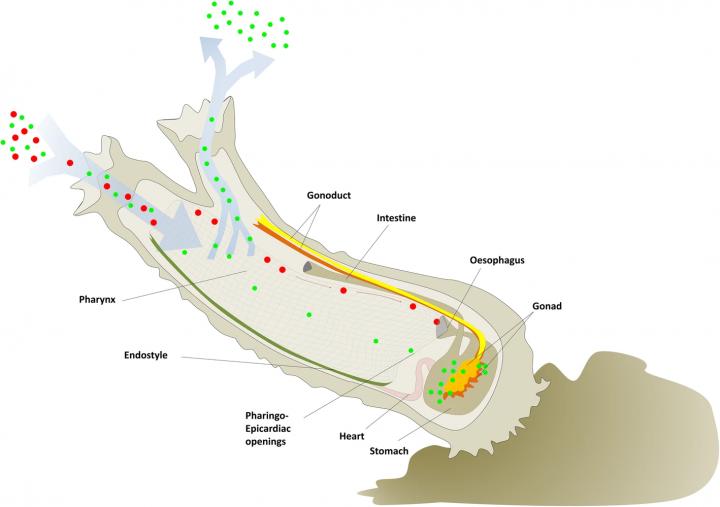 If you’ve been to your local beach, you may have noticed the wind tossing around litter such as an empty potato chip bag or a plastic straw. These plastics often make their way into the ocean, affecting not only marine life and the environment but also threatening food safety and human health.

Eventually, many of these plastics break down into microscopic sizes, making it hard for scientists to quantify and measure them. Researchers call these incredibly small fragments “nanoplastics” and “microplastics” because they are not visible to the naked eye. Now, in a multiorganizational effort led by the National Institute of Standards and Technology (NIST) and the European Commission’s Joint Research Centre (JRC), researchers are turning to a lower part of the food chain to solve this problem.

The researchers have developed a novel method that uses a filter-feeding marine species to collect these tiny plastics from ocean water. The team published its findings as a proof-of-principle study in the scientific journal Microplastics and Nanoplastics.

Plastics consist of synthetic materials known as polymers that are usually made from petroleum and other fossil fuels. Each year more than 300 million tons of plastics are produced, and 8 million tons end up in the ocean. The most common kinds of plastics found in marine environments are polyethylene and polypropylene. Low-density polyethylene is commonly used in plastic grocery bags or six-pack rings for soda cans. Polypropylene is commonly used in reusable food containers or bottle caps.

“Sunlight and other chemical and mechanical processes cause these plastic objects to become smaller and smaller,” said NIST researcher Vince Hackley. “With time they change their shape and maybe even their chemistry.”

While there isn’t an official definition for these smaller nanoplastics, researchers generally describe them as being artificial products that the environment breaks down into microscopic pieces. They’re typically the size of one millionth of a meter (one micrometer, or a micron) or smaller.

These tiny plastics pose many potential hazards to the environment and food chain. “As plastic materials degrade and become smaller, they are consumed by fish or other marine organisms like mollusks. Through that path they end up in the food system, and then in us. That’s the big concern,” said Hackley.

For help in measuring nanoplastics, researchers turned to a group of marine species known as tunicates, which process large volumes of water through their bodies to get food and oxygen — and, unintentionally, nanoplastics. What makes tunicates so useful to this project is that they can ingest nanoplastics without affecting the plastics’ shapes or size.

For their study, researchers chose a tunicate species known as C. robusta because “they have a good retention efficiency for micro- and nanoparticles,” said European Commission researcher Andrea Valsesia. The researchers obtained live specimens of the species as part of a collaboration with the Institute of Biochemistry and Cell Biology and the Stazione Zoologica Anton Dohrn research institute, both in Naples, Italy.

The tunicates were exposed to different concentrations of polystyrene, a versatile plastic, in the form of nanosize particles. The tunicates were then harvested and then went through a chemical digestion process, which separated the nanoplastics from the organisms. However, during this stage some residual organic compounds digested by the tunicate were still mixed in with the nanoplastics, possibly interfering with the purification and analysis of the plastics.

So, researchers used an additional isolation technique called asymmetrical-flow field flow fractionation (AF4) to separate the nanoplastics from the unwanted material. The separated or “fractionated” nanoplastics could then be collected for further analysis. “That is one of the biggest issues in this field: the ability to find these nanoplastics and isolate and separate them from the environment they exist in,” said Valsesia.

The nanoplastic samples were then placed on a specially engineered chip, designed so that the nanoplastics formed clusters, making it easier to detect and count them in the sample. Lastly, the researchers used Raman spectroscopy, a noninvasive laser-based technique, to characterize and identify the chemical structure of the nanoplastics.

The special chips provide advantages over previous methods. “Normally, using Raman spectroscopy for identifying nanoplastics is challenging, but with the engineered chips researchers can overcome this limitation, which is an important step for potential standardization of this method,” said Valsesia. “The method also enables detection of the nanoplastics in the tunicate with high sensitivity because it concentrates the nanoparticles into specific locations on the chip.”

The researchers hope this method can lay the foundation for future work. “Almost everything we’re doing is at the frontier. There are no widely adopted methods or measurements,” said Hackley. “This study on its own is not the end point. It’s a model for how to do things going forward.”

Among other possibilities, this approach might pave the way for using tunicates to serve as biological indicators of an ecosystem’s health. “Scientists might be able to analyze tunicates in a particular spot to look at nanoplastic pollution in that area,” said Jérémie Parot, who worked on this study while at NIST and is now at SINTEF Industry, a research institute in Norway.

The NIST and JRC researchers continue to work together through a collaboration agreement and hope it will provide additional foundations for this field, such as a reference material for nanoplastics. For now, the group’s multistep methodology provides a model for other scientists and laboratories to build on. “The most important part of this collaboration was the opportunity to exchange ideas for how we can do things going forward together,” said Hackley.