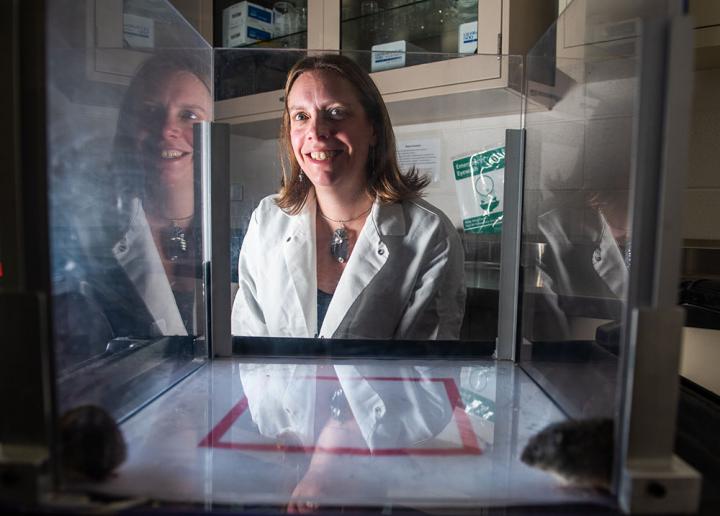 Instead, she’ll be spending time in her laboratory on campus, closely tracking the workouts of tiny prairie voles–furry mouse-like critters who don’t pump iron but do occasionally jump on a running wheel.

The National Heart, Lung and Blood Institute, a division of the National Institutes of Health, has awarded Grippo with a grant of $372,500 to study how exercise can promote brain health and resilience to social stress that results in anxiety, depression and cardiovascular disease in voles–and in us. The three-year project began in December.

While voles don’t make for good pets (they tend to bite), they do make for excellent animal models because of their unique human-like social behaviors. The rodents typically mate with the same partner for life, raise offspring together and form strong family bonds. In both voles and humans, emotional and cardiovascular health is intimately linked to their social experiences.

In humans, depression is the top cause of disability and quality-of-life problems. The prevalence of depression in patients with coronary artery disease is about five times that of the general population, and in all developed countries, heart disease is the No. 1 killer of both men and women.

For years, Grippo and teams of student researchers have been working with prairie voles. In 2012, she received a similarly sized NIH grant to investigate links between the animals’ environment and health.

The new NIH project involves monitoring the exercise habits of voles 24/7, while also documenting the effect of the exercise on particular hormones, proteins and regions of the brain that help us cope with stress. They expect to find differences between males and females, both in physical-activity capacity and in the way the brain regulates the heart.

The animals won’t be forced or even encouraged to hit the running wheel. Rather, frequency and duration of exercise will be up to each individual vole.

“We want the exercise to be beneficial but not stressful,” Grippo says. “Prairie voles do use the exercise wheel, but just like humans, there’s a lot of variability in their decisions to engage in physical activity. So we will look at the relationships, among levels of exercise, in mental health and brain function.”

The researchers can actually assess the mental health of a vole through observations. When the animals are depressed, they’re more helpless and less likely to spend time exploring new environments.

Infrared sensors and bike odometers will be used to help the scientists monitor the voles’ exercise, including the speed and distance of their turns on the wheel.

“There’s a sweet spot when it comes to exercise,” Grippo says. “We’ve previously observed that moderate exercise actually promotes greater benefits in hormone levels and emotions than high amounts of exercise. You don’t need to be an ultra-marathon runner to derive benefits from physical activity.”

Incorporating students into the research is always a high priority for Grippo’s lab.

“Working with the prairie voles is an adventure,” says Nigeria native Oreoluwa Akinbo, a graduate student who has spent three years in the lab.

“I chose to work with Angela because of her unique research angle in neuroscience. She studies an animal model that is present in only a few research labs across the country,” Akinbo says. “I was always interested in the long-term effects of stress and how they could affect mental health.”

Over the past decade, more than 50 students have worked on research with the voles. For the current project, seven students are involved, including three undergrads and a high school student. A postdoctoral researcher will join the team in about a year.

“They are involved in all aspects of the research, assisting in experiment design, formulating hypotheses, writing publications and helping with public outreach,” Grippo says. “This grant allows for an engaging learning experience for our students, and one in which they can contribute to important research that will improve our ability to create prevention and treatment strategies for social stress.”

Freshwater mussel shells were material of choice for prehistoric craftsmen

Scienmag May 7, 2019
A new study suggests that 6000-years-ago people across Europe shared a cultural tradition of using freshwater…