The Astronomy and Astrophysics Decadal Survey (Astro2020) of the U.S. National Academy of Sciences has published its report and the Next Generation Very Large Array (ngVLA) received high priority for new ground-based observatories to be constructed during the coming decade. The report, in which ngVLA shared second ranking among ground-based projects, was the culmination of a lengthy process aimed at developing a comprehensive research strategy and vision for a decade of transformative science at the frontiers of astronomy and astrophysics. 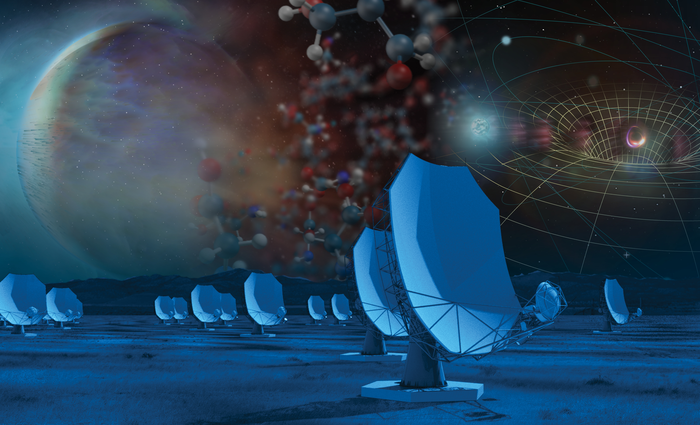 The Astronomy and Astrophysics Decadal Survey (Astro2020) of the U.S. National Academy of Sciences has published its report and the Next Generation Very Large Array (ngVLA) received high priority for new ground-based observatories to be constructed during the coming decade. The report, in which ngVLA shared second ranking among ground-based projects, was the culmination of a lengthy process aimed at developing a comprehensive research strategy and vision for a decade of transformative science at the frontiers of astronomy and astrophysics.

The ngVLA is a system of 263 dish antennas spread across the entire extent of North America and concentrated in the U.S. Southwest that will provide dramatic new scientific capabilities to the world’s astronomers. The Astro2020 report led the ground-based facility list with the U.S. Extremely Large Telescope Project (US-ELT), a plan for two large optical telescopes — the Thirty Meter Telescope and the Giant Magellan Telescope, both under different stages of construction. After US-ELT, equal priority was given for development and construction for the ngVLA and the Cosmic Microwave Background Stage-4 experiment (CMB-S4).

“Being ranked as an important new initiative indicates that our colleagues from all specialties within astronomy and astrophysics have recognized that they need the ngVLA to meet the leading research challenges of the coming decades. We designed the ngVLA based on extensive advice from the research community and know it will be in high demand by scientists from around the world,” said NRAO Director Tony Beasley.

With the publication of the Astro2020 report, the ngVLA next will require approval by the National Science Foundation’s National Science Board and funding by Congress. Construction could begin by 2026 with early scientific observations starting in 2029 and full scientific operations by 2035.

“The high scientific priority given to the ngVLA reflects the breadth and depth of the science that it makes possible, from the formation of exoplanets, to testing relativity using pulsars and black holes, to the study of some of the earliest galaxies in the Universe. This high ranking is a strong endorsement, and it opens the door to the U.S. continuing its leadership in radio astronomy and thus astrophysics as a whole for decades to come,” said Alberto Bolatto, co-chair of the ngVLA Science Advisory Council and a Professor of Astronomy at the University of Maryland, College Park.

“This Astro2020 outcome is a direct result of the close collaboration between NRAO and the greater astronomical community in developing both the broad, transformative science case and technical design of the ngVLA over the last five-plus years,” said Eric Murphy, NRAO’s Project Scientist for ngVLA. “All of the community’s hard work has clearly paid off and we now look forward to continuing this collaboration as we finalize the design and move toward achieving first light with the ngVLA,” Murphy added.

The ngVLA is designed to have sensitivity to detect faint objects and resolving power — ability to see fine detail — more than 10 times greater than the current VLA. It can address fundamental questions in all major areas of astrophysics. The ngVLA’s capabilities will complement those of the Atacama Large Millimeter/submillimeter Array (ALMA) and other planned instruments such as the lower-frequency Square Kilometer Array. It also will complement the capabilities of the US-ELT optical telescopes and the orbiting James Webb Space Telescope, which will operate at infrared wavelengths and is scheduled for launch next month.

The ngVLA is a resource for all astronomers, regardless of their institution or background. It will be accessible to all segments of the research community. Anyone will be able to submit an observing proposal to take advantage of the ngVLA’s advanced capabilities for frontier science.

The Astro 2020 report said, “The ngVLA facility would be absolutely unique worldwide in both sensitivity and frequency coverage,” and concludes that “It is of essential importance to astronomy that the VLA and Very Long Baseline Array be replaced by an observatory that can achieve roughly an order of magnitude improvement in sensitivity compared to these facilities, with the ability to image radio sources on scales of arcminutes to fractions of a milliarcsecond.”

“We congratulate the US-ELT and CMB-S4  teams for their strong proposals, and look forward to working alongside them, the research community and the National Science Foundation to provide astronomers with the advanced, multiwavelength suite of research tools needed to meet the challenges of 21st-Century astrophysics, as outlined in the Astro2020 report,” Beasley said. “We appreciate the tremendous amount of work that went into producing the Astro2020 report, including many members of the scientific community and particularly the tireless efforts of the chairs and the steering committees,” he added.

The ngVLA will have a dense core of antennas and a signal processing center at the current site of the VLA on the Plains of San Agustin in New Mexico. The system will include other antennas located throughout New Mexico and in west Texas, eastern Arizona, and northern Mexico. More far-flung antennas will be located in clusters in Hawaii, Washington, California, Iowa, West Virginia, New Hampshire, Puerto Rico (at Arecibo Observatory), the U.S. Virgin Islands, and Canada. Operations will be conducted at the VLA site and in nearby Socorro, New Mexico, with additional science operations in a metropolitan area to be determined.

The NRAO has received $23 million in funding from the National Science Foundation for design and development work on the ngVLA’s antennas, and in May, NRAO officials signed an agreement with the German firm mtex antenna technology GmbH to develop a production-ready design and produce a prototype ngVLA antenna.

Adam Cohen, president of Associated Universities, Inc. (AUI), which operates the NRAO, said, “We are excited by this strong endorsement of ngVLA by the research community and look forward to continuing AUI’s nearly seven-decade record of developing and providing some of the world’s finest telescopes for the advancement of astronomy. We greatly appreciate the National Science Foundation’s support for the initial stages of the ngVLA and are eager to work with them to make this outstanding facility a reality.”

Earlier this year, the Canadian Astronomy Long Range Plan 2020-2030, a report on priorities and recommendations for Canadian astronomy over the next decade, recommended that Canada support the ngVLA. That panel recommended that Canada provide $130 million toward ngVLA construction and $6 million per year for operating the facility. A plan for Japanese contribution to the ngVLA is one of the major proposals under consideration by that nation’s scientific community to become part of the Master Plan 2023 of the Science Council of Japan.

The ngVLA’s design is the result of extensive collaboration with researchers across the landscape of astrophysics. Through a series of workshops and science meetings beginning in 2015, NRAO worked with numerous scientists and engineers to develop a design that will support a wide breadth of scientific investigations over the lifetime of the facility. Participants from around the world contributed suggestions and expertise that helped guide the design.