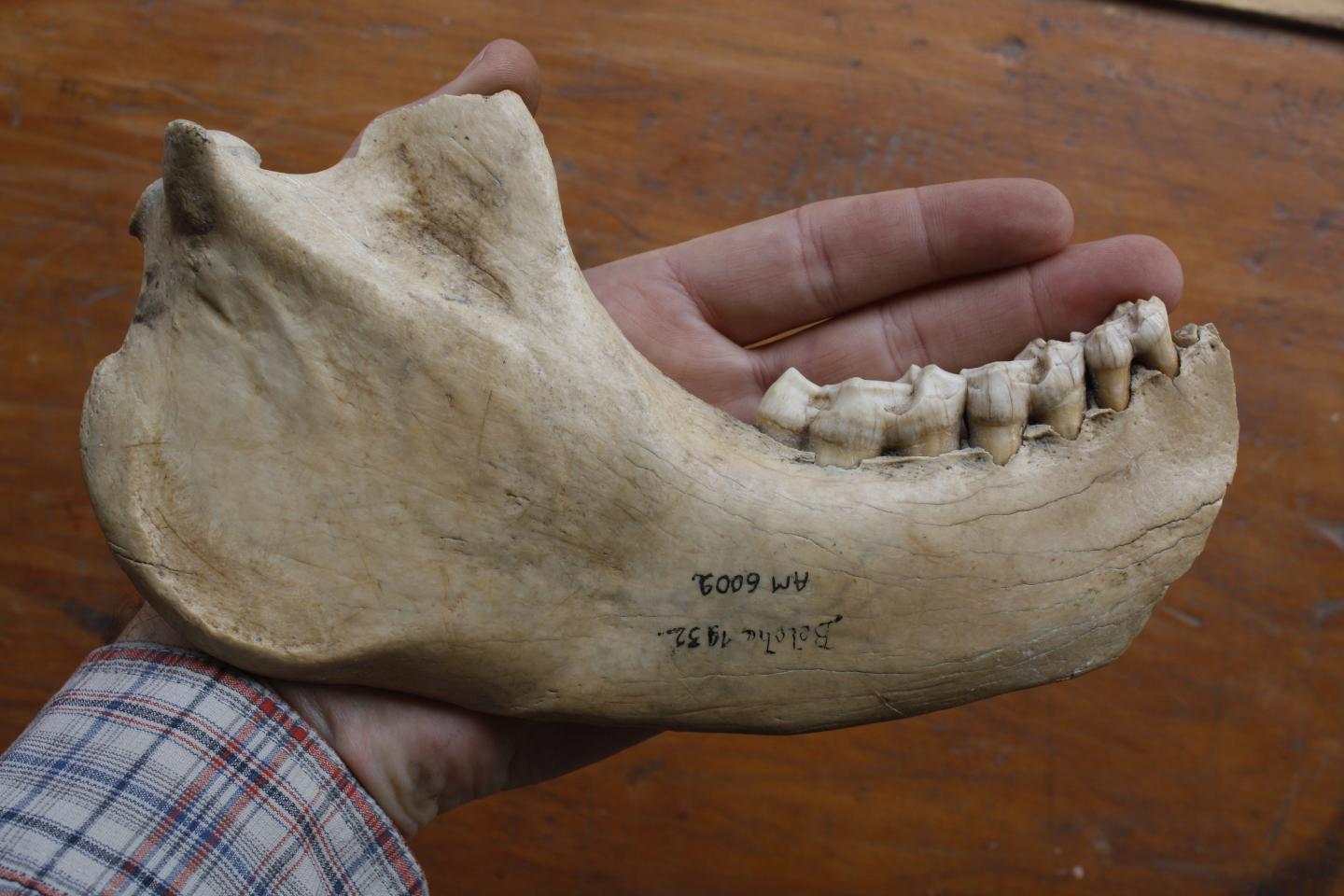 UNIVERSITY PARK, Pa. — Using an unusually well-preserved subfossil jawbone, a team of researchers — led by Penn State and with a multi-national team of collaborators including scientists from the Université d’Antananarivo in Madagascar — has sequenced for the first time the nuclear genome of the koala lemur (Megaladapis edwardsi), one of the largest of the 17 or so giant lemur species that went extinct on the island of Madagascar between about 500 and 2,000 years ago. The findings reveal new information about this animal’s position on the primate family tree and how it interacted with its environment, which could help in understanding the impacts of past lemur extinctions on Madagascar’s ecosystems.

“More than 100 species of lemurs live on Madagascar today, but in recent history, the diversity of these animals was even greater,” said George Perry, associate professor of anthropology and biology, Penn State. “From skeletal remains and radiocarbon dating, we know that at least 17 species of lemurs have gone extinct, and that these extinctions happened relatively recently. What’s fascinating is that all the extinct lemurs were bigger than the ones that survived, and some substantially so; for example, the one we studied weighed about 180 pounds.”

Perry explained that much is unknown about the biology of these extinct lemurs and what their ecosystems were like. There is even uncertainty about how they were related to each other and to the extant lemurs that are alive today. This is due, in part, he said, to the difficulty inherent in working with ancient DNA, especially from animals that lived in tropical and sub-tropical locations.

“While many nuclear genomes of extinct animals have now been sequenced since the first extinct animal — the woolly mammoth — had its nuclear genome sequenced at Penn State in 2008, relatively few of these species have been from warmer climates due to faster DNA degradation in these conditions,” said Perry. “For example, to date, Penn State’s Ancient DNA Laboratory has screened hundreds of extinct lemur subfossils [or ancient bones that have not yet gone through the process of turning into rock]. Yet only two of our samples had sufficient DNA preservation for us to attempt to sequence the nuclear genome. The M. edwardsi jawbone was the best preserved.”

Part of the collection of the Laboratory of Primatology and Paleontology at the University of Antananarivo, the jawbone that the team used in its study — which was published today (June 22) in the journal Proceedings of the National Academy of Sciences — had originally been discovered at Beloha Anavoha in southern Madagascar. Carbon-14 dating, a commonly used method for determining the age of archeological artifacts of a biological origin, revealed that the M. edwardsi jawbone was about 1,475 years old.

In addition to M. edwardsi, the team newly sequenced the genomes of two extant — or currently living — lemur species: the weasel sportive lemur (Lepilemur mustelinus) and the red-fronted lemur (Eulemur rufifrons). The DNA from these species came from ear punches that members of the team, led by Edward E. Louis Jr., director of conservation genetics at Omaha’s Henry Doorly Zoo and Aquarium and general director of the Madagascar Biodiversity Partnership, obtained from wild-caught individuals.

According to Perry, the first genetic study of M. edwardsi — conducted in 2005 by Anne Yoder, Braxton Craven Professor of Evolutionary Biology at Duke University and her team, and now a co-author of the current paper — was an analysis of a small fragment of the species’ mitochondrial DNA.

“When Anne and her team observed the phylogenetic placement of Megaladapis to be more closely related to Eulemur than to Lepilemur, it was somewhat of a shock, in a cool way,” he said. “But uncertainty about the relationship between Megaladapis and other lemurs has continued to linger among scientists. That 2005 study was a really important one, and now with the more sophisticated technology available to us today, we robustly confirmed that major finding.”

In addition to extant lemur species, the team also compared M. edwardsi’s genome to the genomes of dozens of more distantly related species, including golden snub-nosed colobine monkeys, which are folivores, and horses, which are herbivores.

“We found similarities between M. edwardsi and these two species in some of the genes that encode protein products that function in the biodegradation of plant toxins and in nutrient absorption, consistent with dental evidence suggesting that M. edwardsi was folivorous,” said Marciniak.

In the future, the team plans to analyze DNA from additional extinct lemurs and non-lemur primates with the goal of continuing to fill in the gaps in the primate family tree.

“For now,” said Perry, “we are excited to have been able to analyze M. edwardsi’s nuclear genome sequence for insights into the evolutionary biology and behavioral ecology of this extinct animal and to have resolved its phylogenetic relationship with some other extant lemurs.”

The College of Liberal Arts and Huck Institutes of the Life Sciences at Penn State, the National Science Foundation and the Ahmanson Foundation supported this research.