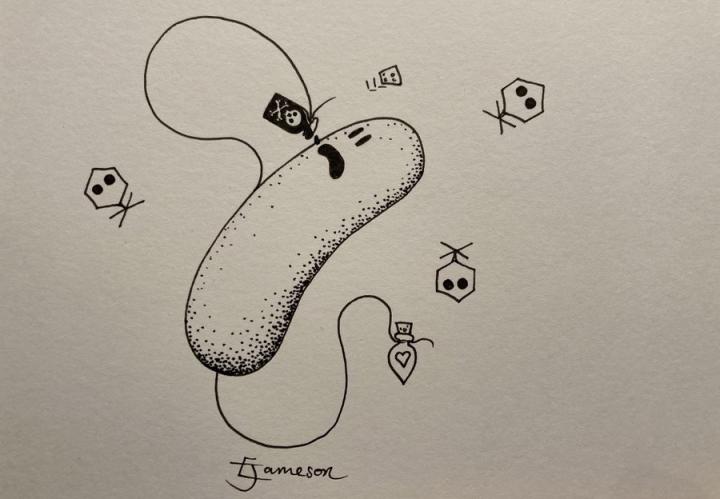 Bacteria are always hungry, according to Thomas Wood, Biotechnology Endowed Chair and professor of chemical engineering in the Penn State College of Engineering. If you gave a single bacterium all the food it wanted, it would obtain the mass of the Earth in about two days.

To survive periods of starvation, bacteria must slow down their activity, or “go to sleep,” according to Wood. Toxin-antitoxin (TA) systems, or small genetic elements found in the chromosomes of bacteria, allow bacteria to either speed up growth — using antitoxins — or slow down growth — using toxins — in order to thrive in periods where food is either plentiful or scarce.

Wood and his colleagues detail their discovery of a TA system that they named the HEPN/MNT system — higher?eukaryotes and prokaryotes nucleotide-binding and minimal nucleotidyltransferase — in Nucleic Acids Research.

“If you eat three meals a day, bacteria in your stomach starve between each of the meals,” Wood said. “If bacteria did not have toxins to slow their metabolism and save their resources, they would run out of energy and die during each starvation period.”

In the HEPN/MNT system, the MNT antitoxin “bites” the HEPN toxin to inactivate and block it. More specifically, adenosine triphosphate?(ATP) is transferred near the active site of the toxin protein, inhibiting the toxin.

“The easiest way for a bacterial cell to turn off a toxin is to bear-hug and hold on to it,” Wood said. “We found in this specific system that the antitoxin acts as an enzyme to inactivate the toxin.”

The HEPN/MNT system is the most abundant system found in prokaryotes, or one-cell organisms like bacteria, according to Wood.

Wood’s latest discovery is the third type of TA system he has helped to discover and name. In 2008, with follow-up studies published in 2016, Wood discovered a new type of antitoxin that functions to oxidize?the toxin sulfur. Wood named the system “TomB” after Tom, his nickname.

In 2012, Wood published on a TA system known as GhoST, the first known TA system in which the antitoxin functions as an enzyme. In the system, the antitoxin GhoS consumes the genetic material, or mRNA, to remove the toxin, GhoT, from a bacterial cell. Otherwise, the toxin GhoT punches a hole in the cell membrane and puts the cell to sleep, giving it a ghost-like appearance.

“All antitoxins inactivate toxins and prevent them from slowing cell growth,” Wood said. “The difference lies in how each antitoxin interacts with the?toxin.”

TA systems are important both to conserve healthy bacteria and to fight off viruses.

“We have a love-hate relationship with bacteria, but we need them, especially in our digestive systems,” he said.

Wood discovered in 1996 that TA systems slow down bacteria growth when a virus attacks in order to prevent the virus from killing the cell.

“TA systems prevent viruses from propagating to a hundred neighbors and taking control of a bacterial population,” Wood said. “A virus has no way to kill a bacterium if it is asleep.”

The National Science Foundation of China and Wood’s biotechnology endowment in the Penn State Department of Chemical Engineering funded this research.