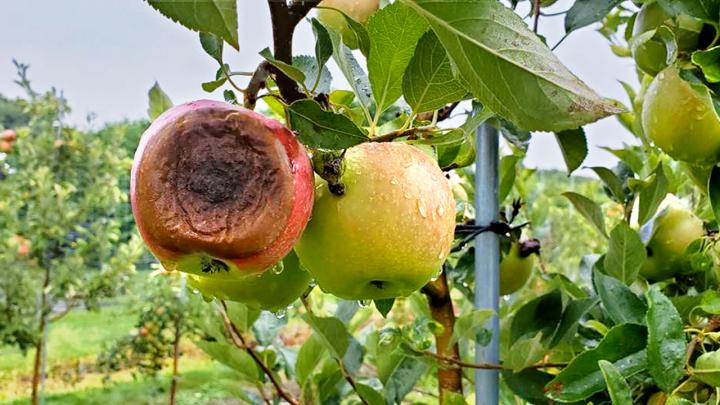 ITHACA, N.Y. – In a study of New York state apple orchards, Cornell University plant pathologists have identified a new fungal pathogen that causes bitter rot disease in apples. In addition, a second related fungus known to cause rot disease in other fruits was found for the first time in apples.

Both pathogens belong to the genus Colletotrichum, which contains 189 species of fungi that cause devastating rot diseases in a wide variety of fruit crops, including banana, strawberry, citrus, avocado, papaya, mango and apple.

If protective practices are not applied in a timely manner, apple losses from bitter rot in New York state can average up to 25% per year, with reports of some organic farms losing up to 100% of their crop. Bitter rot also accounts for up to 5% additional loss of marketable fruit in storage post-harvest.

This damage is costly for farmers; the farm gate value for New York apples was roughly $260 million in 2018, according to U.S. Department of Agriculture statistics.

The dominant species found in the apples was C. fioriniae, followed by C. chrysophilum, which is found in other fruits but not apples until now, and the newly discovered C. noveboracense, named after New York state in Latin.

Colletotrichum fungi that infect apple fruit can largely be divided in two main groups. One group called the C. gloeosporioides complex thrives in warmer growing regions than the other group, the C. acutatum complex, which is more frequently reported in cooler apple growing regions. And based on the group they belong to, species can react differently to fungicides, which the researchers also tested. For this reason, identifying and characterizing the fungi is important for bitter rot management.

“When we know which species are dominant in our area, we know how environmental conditions will affect them and which control method is best in an orchard,” said study first author Fatemeh Khodadadi, a postdoctoral researcher in Acimovic’s lab.

In the future, the researchers plan to work with other plant pathologists and apple breeders to identify possible genes that confer natural resistance to Colletotrichum fungi that may be bred into apple cultivars.

The study, “Identification and Characterization of Colletotrichum Species Causing Apple Bitter Rot in New York and Description of C. noveboracense sp. nov.,” was published July 6 in the journal Scientific Reports.