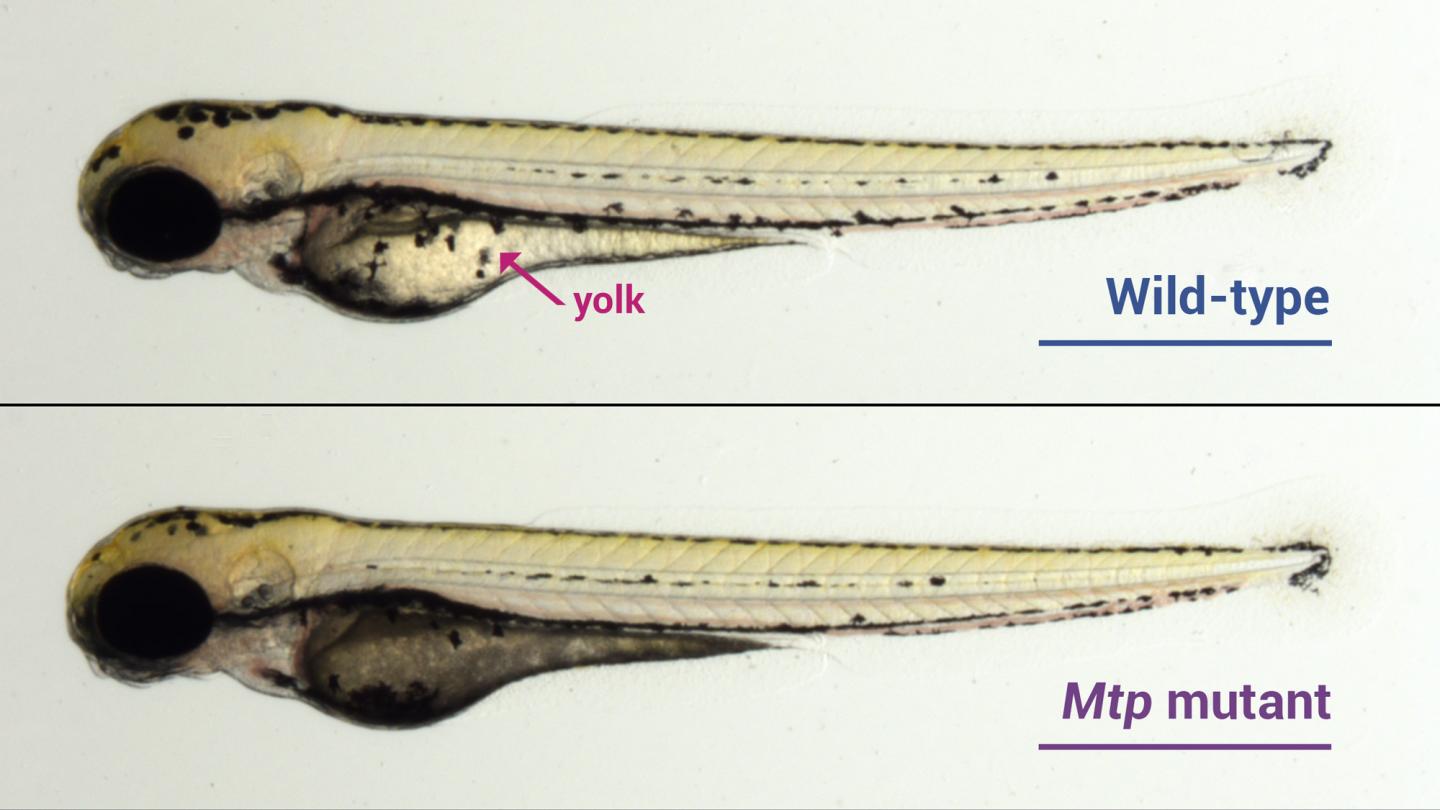 Baltimore, MD– New work led by Carnegie’s Meredith Wilson and Steve Farber identifies a potential therapeutic target for clogged arteries and other health risks that stem from an excess of harmful fats in the bloodstream. Their findings are published by PLOS Genetics.

“Cardiovascular disease occurs when lipids from the blood plasma are deposited in the walls of blood vessels, ultimately restricting blood flow,” explained Farber, who specializes in elucidating how cells process lipids. “This complex disease affects about a third of the world’s population, so improving our understanding of the mechanisms that regulate the levels of blood lipids has important public health implications.”

Fat molecules, also called lipids, such as cholesterol and triglycerides are shuttled around the circulatory system by a protein called Apolipoprotein-B, or ApoB for short. These complexes of lipid and protein are called ApoB-containing lipoproteins and are essential for transporting lipids from the intestine and liver to the tissues of the body. However, because they can also cause cardiovascular disease, they are commonly known as “bad cholesterol.”

In this new research, Wilson, Farber and their colleagues–including Carnegie’s Aidan Danoff, Monica Hensley, Vanessa Quinlivan, James Thierer and Frederick Tan–focused on a protein that is critical for the synthesis of ApoB-containing lipoproteins. This protein, called MTP, or microsomal triglyceride transfer protein, is highly conserved in animals, from insects to humans. MTP loads lipids onto ApoB, a key initial step in the synthesis of ApoB-containing lipoproteins.

Normally, MTP can transfer different types of lipids to ApoB, including triglycerides, which are a major source of energy, and phospholipids, the building-blocks of membranes in the cell. However, the researchers revealed for the first time a mutation in MTP that blocks the loading of triglycerides, but not phospholipids, onto ApoB.

“The separation of these two transfer functions was unexpected and is important, because high triglyceride levels in lipoproteins are correlated with bad clinical outcomes like diabetes and heart disease,” said lead author Wilson.

Previously identified mutations in MTP that prevent both transfer functions of the protein cause a malabsorption syndrome, in which the intestines have difficulty absorbing fats and fat-soluble vitamins from the diet. This can result in gastrointestinal distress or more serious problems, such as malnutrition or severe weight loss. However, zebrafish with this newly identified mutation do not exhibit malabsorption or growth defects, because they can still transfer phospholipids to make ApoB-containing lipoproteins.

For years, MTP has been considered a possible therapeutic target to help lower triglyceride levels in the blood and prevent cardiovascular disease. However, the existing chemical inhibitors of MTP are too effective and block all MTP function, which can cause intestinal fat malabsorption and a dangerous accumulation of fat in the liver.

“Our study opens the door for the design of more specific MTP inhibitors that mimic this new mutation and selectively block triglyceride transfer to ApoB,” concluded Wilson. “Our data suggests that this type of inhibitor could reduce circulating triglyceride levels without the risk of unpleasant and serious side effects in the intestine and liver.”