Scientists investigating the underside of the world’s largest ice sheet in East Antarctica have discovered a city-size lake whose sediments might contain a history of the ice sheet since its earliest beginnings. That would answer questions about what Antarctica was like before it froze, how climate change has affected it over its history, and how the ice sheet might behave as the world warms. 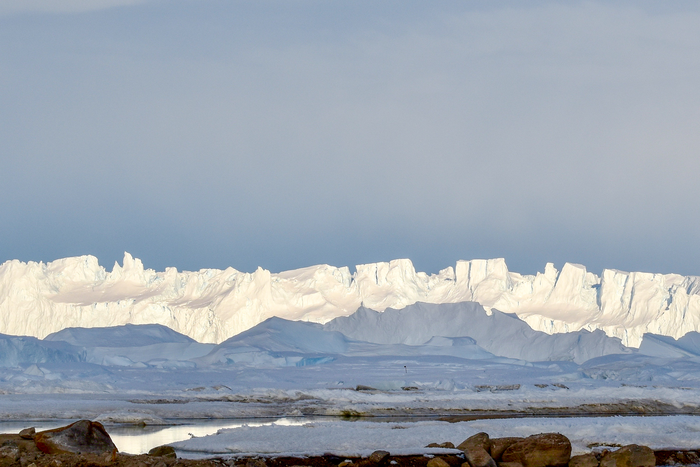 Scientists investigating the underside of the world’s largest ice sheet in East Antarctica have discovered a city-size lake whose sediments might contain a history of the ice sheet since its earliest beginnings. That would answer questions about what Antarctica was like before it froze, how climate change has affected it over its history, and how the ice sheet might behave as the world warms.

Revealed by heavily instrumented polar research aircraft, Lake Snow Eagle is covered by 2 miles of ice and lies in a mile-deep canyon in the highlands of Antarctica’s Princess Elizabeth Land, a few hundred miles from the coast.

“This lake is likely to have a record of the entire history of the East Antarctic Ice Sheet, its initiation over 34 million years ago, as well as its growth and evolution across glacial cycles since then,” said polar expert Don Blankenship, one of the paper’s authors and a senior research scientist at The University of Texas at Austin’s Institute for Geophysics. “Our observations also suggest that the ice sheet changed significantly about 10,000 years ago, although we have no idea why.”

Because it lies relatively close to the coast, researchers think that Lake Snow Eagle might contain information about how the East Antarctic Ice Sheet first began and the part played by the Antarctic Circumpolar Current, a ring of cold water circling the continent that scientists think is responsible for keeping it cool.

The study appeared May 9 in the journal Geology.

The first hint that the lake and its host canyon existed emerged when scientists spotted a smooth depression on satellite images of the ice sheet. To confirm it was there, researchers spent three years flying systematic surveys over the site with ice penetrating radar and sensors that measure minute changes in Earth’s gravity and magnetic field.

“I literally jumped when I first saw that bright radar reflection,” said the paper’s lead author, Shuai Yan, a graduate student at UT Austin’s Jackson School of Geosciences who was flight planner for the field research that investigated the lake.

What Yan saw was the lake’s water that, unlike ice, reflects radar like a mirror. Along with the gravity and magnetic surveys, which lit up the underlying geology of the region and the depth of water and sediments, Yan constructed a detailed picture of a jagged, highland topography with Lake Snow Eagle nestled at the base of a canyon.

The newly discovered lake is about 30 miles long, 9 miles wide and 650 feet deep. The sediments at the bottom of the lake are 1,000 feet deep and might include river sediments older than the ice sheet itself.

Moving forward, the researchers said getting a sample of the lake’s sediments by drilling into it would fill big gaps in scientists’ understanding of Antarctica’s glaciation and provide vital information about the ice sheet’s possible demise from climate change.

“This lake’s been accumulating sediment over a very long time, potentially taking us through the period when Antarctica had no ice at all, to when it went into deep freeze,” said co-author Martin Siegert, a glaciologist at Imperial College London. “We don’t have a single record of all those events in one place, but the sediments at the bottom of this lake could be ideal.”

Lake Snow Eagle was named after one of the aircraft used in its discovery. It is one of many features uncovered by ICECAP-2, an international collaboration to map the last unknown regions of East Antarctica by polar research teams from the U.S., U.K., China, Australia, Brazil and India. The team for this paper included scientists from UTIG, Scripps Institute for Oceanography, Imperial College London, the Australian Antarctic Division, and the Polar Research Institute of China. The research was supported by the G. Unger Vetlesen Foundation and funded by governments and institutions of the countries involved.