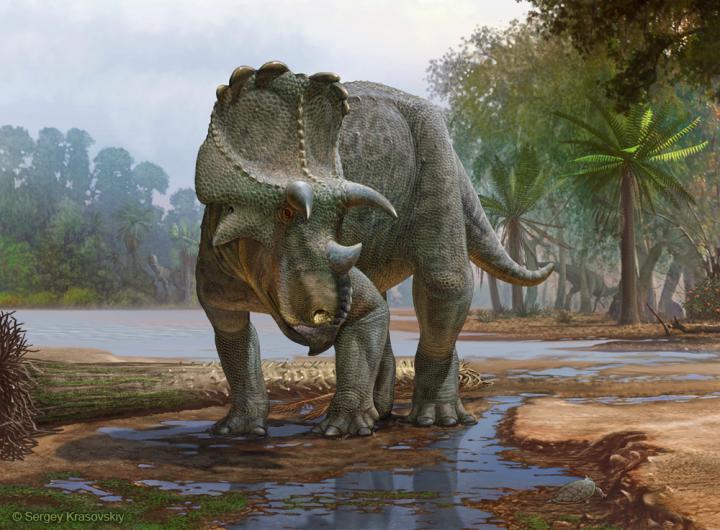 A newly described horned dinosaur that lived in New Mexico 82 million years ago is one of the earliest known ceratopsid species, a group known as horned or frilled dinosaurs. Researchers reported their find in a publication in the journal PalZ (Paläontologische Zeitschrift).

Menefeeceratops sealeyi adds important information to scientists’ understanding of the evolution of ceratopsid dinosaurs, which are characterized by horns and frills, along with beaked faces. In particular, the discovery sheds light on the centrosaurine subfamily of horned dinosaurs, of which Menefeeceratops is believed to be the oldest member. Its remains offer a clearer picture of the group’s evolutionary path before it went extinct at the end of the Cretaceous.

“There has been a striking increase in our knowledge of ceratopsid diversity during the past two decades,” says Dodson, who specializes in the study of horned dinosaurs. “Much of that has resulted from discoveries farther north, from Utah to Alberta. It is particularly exciting that this find so far south is significantly older than any previous ceratopsid discovery. It underscores the importance of the Menefee dinosaur fauna for the understanding of the evolution of Late Cretaceous dinosaur faunas throughout western North America.”

Based on the latest investigations, researchers determined the fossils represent a new species. The genus name Menefeeceratops refers to the rock formation in which it was discovered, the Menefee Formation, and to the group of which the species is a part, Ceratopsidae. The species name sealeyi honors Sealey, who unearthed the specimen.

Horned dinosaurs were generally large, rhinoceros-like herbivores that likely lived in groups or herds. They were significant members of Late Cretaceous ecosystems in North America. “Ceratopsids are better known from various localities in western North America during the Late Cretaceous near the end of the time of dinosaurs,” says Jasinski. “But we have less information about the group, and their fossils are rarer, when you go back before about 79 million years ago.”

Although bones of the entire dinosaur were not recovered, a significant amount of the skeleton was preserved, including parts of the skull and lower jaws, forearm, hindlimbs, pelvis, vertebrae, and ribs. These bones not only show the animal is unique among known dinosaur species but also provide additional clues to its life history. For example, the fossils show evidence of a potential pathology, resulting from a minor injury or disease, on at least one of the vertebrae near the base of its spinal column.

Some of the key features that distinguish Menefeeceratops from other horned dinosaurs involve the bone that make up the sides of the dinosaur’s frill, known as the squamosal. While less ornate than those of some other ceratopsids, Menefeeceratops’ squamosal has a distinct pattern of concave and convex parts.

Menefeeceratops was part of an ancient ecosystem with numerous other dinosaurs, including the recently recognized nodosaurid ankylosaur Invictarx and the tyrannosaurid Dynamoterror, as well as hadrosaurids and dromaeosaurids.

“Menefeeceratops was part of a thriving Cretaceous ecosystem in the southwestern United States with dinosaurs that predated a lot of the more well-known members closer to end of the Cretaceous,” says Jasinski.

While relatively less work has been done collecting dinosaurs in the Menefee Formation to date, the researchers hope that more field work and collecting in these areas, together with new analyses, will turn up more fossils of Menefeeceratops and ensure a better understanding of the ancient ecosystem of which it was part.

Steven E. Jasinski is a curator of paleontology and geology at the State Museum of Pennsylvania and corporate faculty at Harrisburg University of Science and Technology. He earned his doctoral degree in the Department of Earth and Environmental Science in the University of Pennsylvania’s School of Arts & Sciences.

Sebastian G. Dalman is a research associate at the New Mexico Museum of Natural History and Science in Albuquerque.

Spencer G. Lucas is a curator of paleontology at the New Mexico Museum of Natural History and Science in Albuquerque.

Asher J. Lichtig is a research associate at the New Mexico Museum of Natural History and Science in Albuquerque.