New work upends understanding of how blood is formed

The origins of our blood may not be quite what we thought. Using cellular “barcoding” in mice, a groundbreaking study finds that blood cells originate not from one type of mother cell, but two, with potential implications for blood cancers, bone marrow transplant, and immunology. Fernando Camargo, PhD, of the Stem Cell Program at Boston Children’s Hospital led the study, published in Nature on June 15. 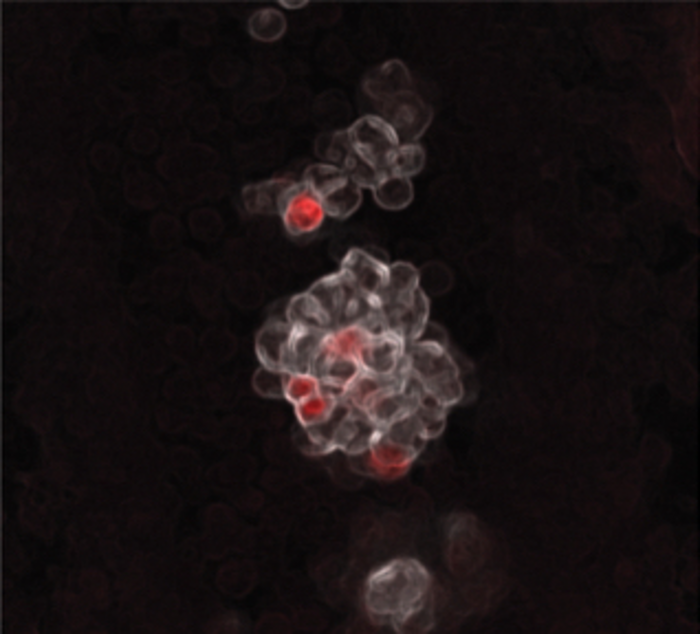 The origins of our blood may not be quite what we thought. Using cellular “barcoding” in mice, a groundbreaking study finds that blood cells originate not from one type of mother cell, but two, with potential implications for blood cancers, bone marrow transplant, and immunology. Fernando Camargo, PhD, of the Stem Cell Program at Boston Children’s Hospital led the study, published in Nature on June 15.

“Historically, people have believed that most of our blood comes from a very small number of cells that eventually become blood stem cells, also known as hematopoietic stem cells,” says Camargo, who is also a member of the Harvard Stem Cell Institute and a professor at Harvard University. “We were surprised to find another group of progenitor cells that do not come from stem cells. They make most of the blood in fetal life until young adulthood, and then gradually start decreasing.”

The researchers are now following up to see if the findings also apply to humans. If so, these cells, known as embryonic multipotent progenitor cells (eMPPs), could potentially inform new treatments for boosting aging people’s immune systems. They could also shed new light on blood cancers, especially those in children, and help make bone marrow transplants more effective.

Camargo’s team applied a barcoding technique they developed several years ago. Using either an enzyme known as transposase or CRISPR gene editing, they inserted unique genetic sequences into embryonic mouse cells in such a way that all the cells descended from them also carried those sequences. This enabled the team to track the emergence of all the different types of blood cells and where they came from, all the way to adulthood.

“Previously, people didn’t have these tools,” says Camargo. “Also, the idea that stem cells give rise to all the blood cells was so embedded in the field that no one attempted to question it. By tracking what happened in mice over time, we were able to see new biology.”

Through barcoding, the researchers found that eMPPs, as compared with blood stem cells, are a more abundant source of most lymphoid cells important to the immune responses, such as B cells and T cells. Camargo believes the decrease in eMPPs that they observed with age may explain why people’s immunity weakens as they get older.

“We’re now trying to understand why these cells peter out in middle age, which could potentially allow us to manipulate them with the goal of rejuvenating the immune system,” says Camargo.

In theory, there could be two approaches: extending the life of eMPP cells, perhaps through growth factors or immune signaling molecules, or treating blood stem cells with gene therapy or other approaches to make them more like eMPPs.

Camargo is also excited about the potential implications for better understanding and treating blood cancers. For example, myeloid leukemias, striking mostly older people, affect myeloid blood cells such as granulocytes and monocytes. Camargo thinks these leukemias may originate from blood stem cells, and that leukemias in children, which are mostly lymphoid leukemias, may originate from eMPPs.

“We are following up to try to understand the consequences of mutations that lead to leukemia by looking at their effects in both blood stem cells and eMPPs in mice,” he says. “We want to see if the leukemias that arise from these different cells of origin are different — lymphoid-like or myeloid-like.”

Finally, the recognition that there are two types of mother cells in the blood could revolutionize bone marrow transplant.

“When we tried to do bone marrow transplants in mice, we found that the eMPPs didn’t engraft well; they only lasted a few weeks,” says Camargo. “If we could add a few genes to get eMPPs to engraft long term, they could potentially be a better source for a bone marrow transplant. They are more common in younger marrow donors than blood stem cells, and they are primed to produce lymphoid cells, which could lead to better reconstitution of the immune system and fewer infection complications after the graft.”

Sachin H. Patel, MD, PhD, of the Stem Cell Program (now at University of California San Francisco) and Constantina Christodoulou, PhD (now at Bristol Myers Squibb) were co-first authors on the paper. The study was funded by the National Institutes of Health (HL128850-01A1, P01HL13147), the Evans MDS Foundation, the Alex Lemonade Foundation, the Leukemia and Lymphoma Society, and the Howard Hughes Medical Institute. The authors declare no competing interests.

Boston Children’s Hospital is ranked the #1 children’s hospital in the nation by U.S. News & World Report and is a pediatric teaching affiliate of Harvard Medical School. Home to the world’s largest research enterprise based at a pediatric medical center, its discoveries have benefited both children and adults since 1869. Today, 3,000 researchers and scientific staff, including 11 members of the National Academy of Sciences, 25 members of the National Academy of Medicine and 10 Howard Hughes Medical Investigators comprise Boston Children’s research community. Founded as a 20-bed hospital for children, Boston Children’s is now a 415-bed comprehensive center for pediatric and adolescent health care. For more, visit our Answers blog and follow us on social media @BostonChildrens, @BCH_Innovation, Facebook and YouTube.