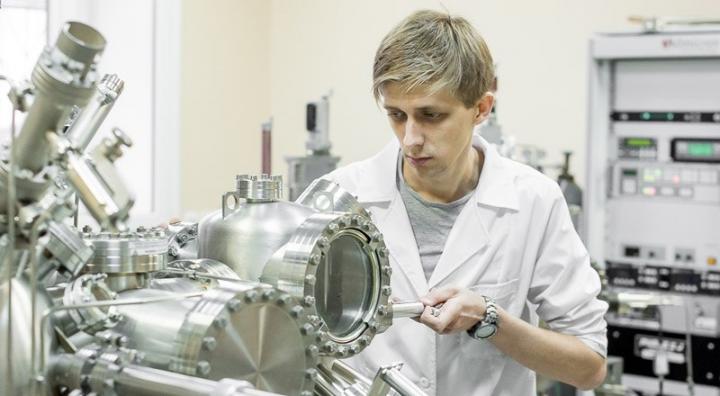 Scientists of Far Eastern Federal University (FEFU) in collaboration with colleagues from South Ural State University and the Chinese Academy of Sciences have developed an alternative method for numerical evaluation of the current induced local magnetization effect in ultrathin ruthenium-cobalt-ruthenium films with a wolfram layer added. That is another throw to fathom how to control spin orientation needed for the correct operation of spintronic electronics devices. A related article was published in Physical Review Applied.

Development of a reliable method for control local magnetization (orientation of spins) remains among the key unsolved problem in spintronic and an important direction for its progress, along with the issues of high current density and the need to affect the system with an external magnetic field.

The study revealed a possibility to change the magnetic parameters of the system in a wide scope by adjusting the materials’ layers thickness. In the ruthenium – cobalt – ruthenium system scrutinized, the current affected the magnetization poorly. However, when a wolfram layer was added to the system, an additional source of spin-polarized electrons appeared. As a result, the efficacy of spin switching is increased.

‘For the time being, such devices are based on semiconductors, and all processes in them are caused by the movement of electrons. Accumulation of electrons in the memory cells makes it possible to store information. If electrons are lost for some reason, the information will be lost too’ Maxim Stebliy explains, Ph.D. in Physical and Mathematical Sciences, a researcher of the Laboratory for Film Technologies, FEFU School of Natural Sciences. ‘In magnetic materials, processing and storing information is qualitatively different. Imagine that each and every element of the magnetic material capacity is associated with a compass needle. This is a magnetic moment. The operation in the magnetic material calls to change the orientation of this needle. The electrons causing the magnetization remain static, and to change the orientation of their compass needles (spins) a significant external effect should be provided. That makes their needles static state stable and in that sense non-volatile. In computer, bit switches that way from zero to one. This very process runs in hard disks. The big technological drawback of that process is that a small reel is wanted through which current is passed and a magnetic field is generated. To switch one bit, there is a need to very quickly change the orientation of the current in the reel. This is a relatively long and energy-consuming process, but most importantly this operation cannot be distributed. There is only one reel while there can be terabytes of information, i.e. 10 in the 13 bits. Hence, a hard disk platter has to rotate at very high speed, since the reel must be brought to its every site. The problem with magnetic materials is that it’s impossible to control the changes in the orientation of their electrons’ needles in a convenient and fast way. A reel is wanted.’

The scientist went on that in recent years technology has been developed that allows one to switch the ‘compass needle’ by applying the current not to the reel, but to the whole structure. In this case, the spins of electrons localized in the crystal lattice of a structure and having stable needle orientation begin to interact with the spins of the current conducted electrons.

‘If somehow we will manage to ‘comb out’, that is, to polarize the randomly oriented spins of current electrons, adjusting them in one direction, then the spins of localized electrons will ‘feel’ that and will switch under certain conditions’. Says Maxim Stebliy. ‘Our article is devoted to a structure containing layers of ruthenium and wolfram. When a current flows through these layers, the spins of the electrons are self-polarized by the right-handed system. This is the spin Hall Effect.’

Researchers put a layer of cobalt on a layer of wolfram and passed a current through the system. Under certain conditions, this can lead to the cobalt layer’s magnetization switches over. This is the so-called spin-torque effect, the performance of which FEFU scientists endeavor to study on the example of different materials, selecting the system where it will be the most profound.

Nanocontainers introduced into the nucleus of living cells

As seen in movies, new meta-hologram can be used as a communication tool

Scienmag Sep 17, 2019
New study of an ape-like pelvis suggests human ancestors might not have been built like modern African apesCredit:…