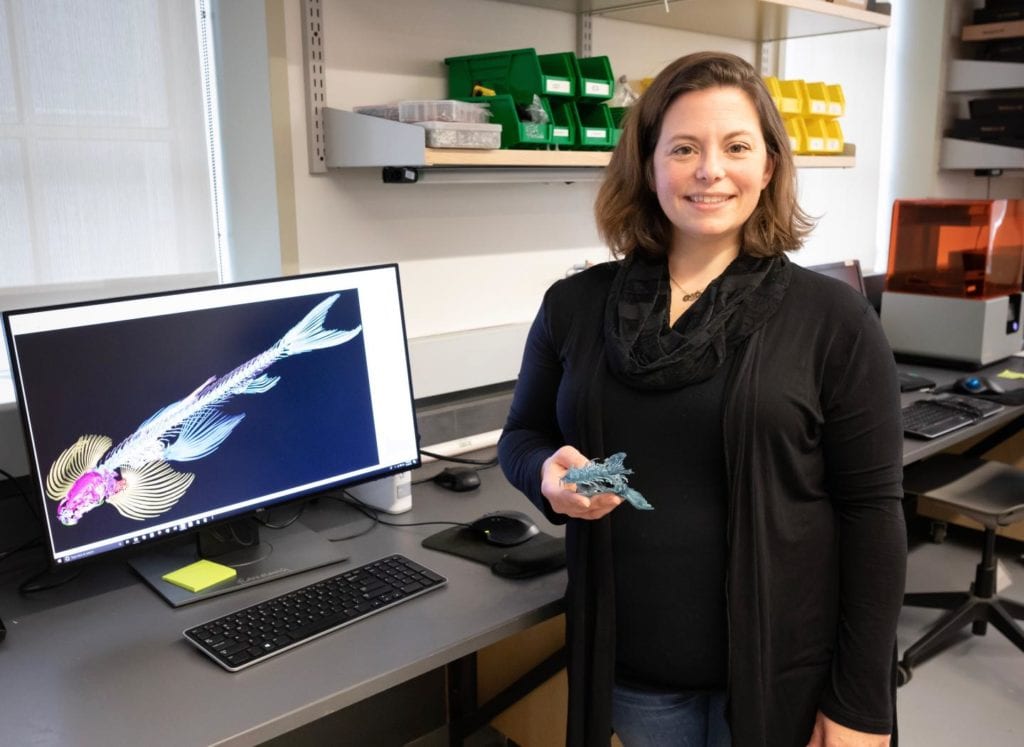 A new research collaboration between New Jersey Institute of Technology (NJIT), Louisiana State University (LSU) and University of Florida is set to launch the first evolutionary study of the unique pelvic structure and walking mechanics of blind cavefish (Cryptotora thamicola) — the only living species of fish known capable of walking on land similarly to four-limbed mammal and amphibian vertebrates, or tetrapods.

The National Science Foundation has announced the project, titled “A Phylogenomically-Based Bioinspired Robotic Model Approach to Addressing the Evolution of Terrestrial Locomotion,” will receive a four-year, $997,510 grant to examine the phylogenomic relationships, morphology, biomechanics and walking performance of the blind cavefish and its relatives, from an evolutionary perspective.

Researchers say the project’s unprecedented, comprehensive study of the cavefish’s vertebrate-like pelvic girdle and phylogeny may provide a new window into the evolution of appendages, pelvis and vertebral column that ancient tetrapod fishes needed to transition to terrestrial life during the Devonian period, between 350 and 400 million years ago.

“Evolutionarily, there are a number of different ways that other species may have approached the water-to-land transition, but the physics and the fundamental properties of land-walking that the cavefish has had to overcome by developing their pelvic structure have not changed in 350 million years,” said Brooke Flammang, the project’s lead principal investigator and assistant professor of biological sciences at NJIT. “This study, for the first time, will provide the opportunity to study and measure a fundamental mechanism that was key to this major evolutionary transition.”

“Combining robotics, genomics and CT morphological examinations, this collaboration could help us visualize evolution in a brand-new light,” said Prosanta Chakrabarty, co-principal investigator, LSU Museum of Natural Science curator of fishes and associate professor in the LSU Department of Biological Sciences. “With support from the National Science Foundation’s Understanding the Rules of Life initiative, we are proud to embark on this landmark study to identify the genomic, morphological and mechanical qualities that enable fish to walk on land.”

Until recently, all living fishes were thought to lack the tetrapodal characteristics necessary for studying the physics of quadrupedal walking by fishes in a terrestrial environment. In 2016, Flammang and fellow NJIT faculty-researcher Daphne Soares observed that the two-inch-long cavefish shared morphological features associated with terrestrial vertebrates, identifying that the fish utilized a robust pelvic girdle attached to its vertebral column in order to walk and climb waterfalls with a salamander-like gait in its native habitat, the Tham Maelana and Tham Susa karst cave systems in northern Thailand.

“There have not been many models or preserved fossil records available to help us understand how the pelvis evolved and formed in the first tetrapods that developed appendages from fins to walk on land,” said Flammang. “These cavefish may not necessarily offer a living analog of what ancient tetrapod fish used to look like, but in better understanding the evolution of the pelvis in this cavefish, we may have a window backward into the physics of early tetrapodal weight-bearing limb support necessary to walk on land.”

The research collaboration will aim to identify the morphological, genomic and mechanical qualities of walking cavefish that may have enabled other early fishes to walk on land. University of Florida researchers, led by Larry Page, Florida Museum of Natural History curator of fishes and affiliate professor of biology, will lead the study’s morphological study and collection effort from as many as 238 fish species that share the same family as Cryptotora thamicola, known as the Balitoridae, for comparative analysis. The morphological analysis will reveal how as a generality, functional phenotypic adaptations can be formed by genomic changes.

The research team at Louisiana State University, led by Chakrabarty, will conduct genomic sequencing of the cavefish and its relatives to determine convergent genetic markers known to be involved in pelvic girdle formation in other walking vertebrates.

“Our goal is to help answer how and why we often see repeated evolution of similar anatomies in different parts of the Tree of Life,” said Chakrabarty. “To do so, we apply molecular techniques at my lab at LSU to better understand the potential genetic convergence and evolution of the phenotypic anatomy being studied at the University of Florida and the functional anatomy being examined at NJIT.”

Flammang’s lab will use phylogenomic, morphological and experimental biomechanical data to create a biorobotic model of the fish. The robotic model will be used to examine possible instances of evolutionary convergence and answer questions on the effect of pelvic morphology on walking performance in extinct fin-to-limb transitional species forms, as well as modern forms.

“This will be the first time we have a phylogeny of this family of fishes that includes this unusual cavefish, and it also may be the first case of anyone using biorobotics to model a major evolutionary transition,” said Flammang. “Once we have a working model of the fish and the evolution of the pelvis based on what we know of these fishes, we can apply the model to other organisms that we have fossil evidence for their morphology to get an idea of how they may have walked at stages in their evolutionary history.”

About New Jersey Institute of Technology:

One of only 32 polytechnic universities in the United States, New Jersey Institute of Technology (NJIT) prepares undergraduate and graduate students and professionals to become leaders in the technology-dependent economy of the 21st century. NJIT’s multidisciplinary curriculum and computing-intensive approach to education provide technological proficiency, business acumen and leadership skills. NJIT has a $1.74 billion annual economic impact on the State of New Jersey, conducts approximately $140 million in research activity each year, and is a global leader in such fields as solar research, nanotechnology, resilient design, tissue engineering and cybersecurity, in addition to others. NJIT is ranked #1 nationally by Forbes for the upward economic mobility of its lowest-income students and is among the top 2 percent of public colleges and universities in return on educational investment, according to PayScale.com.

Sapphires and rubies in the sky

How the brain processes rewards

Teens with obesity and PCOS have more ‘unhealthy’ bacteria

Scienmag Dec 19, 2019
Is anything going to hit Earth? A neat approach to make quicker and more exact analyses of fireball…

Shining (star)light on the search for life