MUSC researchers prove motor cortex is successful target for pain and addiction treatment, which suggests an overlooked area of the brain in TMS treatment 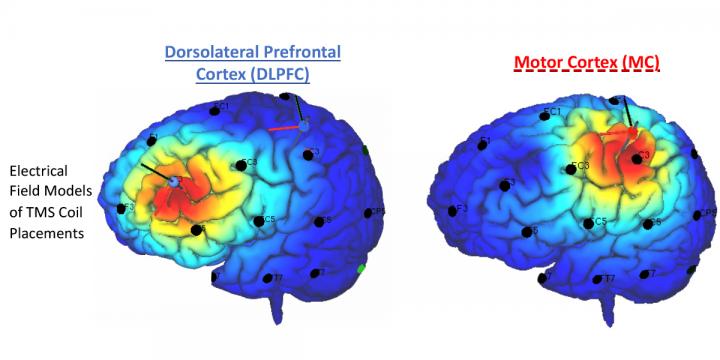 Researchers have discovered that there may be a new pathway in the brain that provides pain relief and reduces cravings for opioids.

Over a third of the U.S. population suffers from chronic pain, with little to no reported relief from medication. Transcranial magnetic brain stimulation (TMS) is a noninvasive form of brain stimulation that may offer a new treatment option for these underserved members of our community.

In a recent paper in Drug and Alcohol Dependence, researchers at the Medical University of South Carolina evaluated two different strategies for relieving pain with TMS: applying TMS to the motor cortex and the dorsolateral prefrontal cortex (DLPFC).

Colleen Hanlon, Ph.D., a professor in the department of psychiatry and behavioral sciences at MUSC and the principal investigator for this paper, expected to support her hypothesis that the DLPFC would be the most effective target for TMS treatment, but the results show just the opposite.

Historically, TMS-based treatments have targeted the DLPFC. In addition to being an FDA-approved target for managing depression, data show that the DLPFC is important in regulating emotions as well as addiction to substances like tobacco, cocaine and alcohol. While the motor cortex has been a popular target for TMS pain relief studies, there was no data to suggest it could also be helpful in opiate users. The new study points to its success as a target.

“I think you can even argue that our data suggests the motor cortex is an overlooked brain region in terms of addiction treatment development,” said Julia Imperatore, MUSC research coordinator and lab manager for this study. Hanlon agrees.

Each study participant’s head was mapped with coordinates to target specific areas of the brain using a swim cap marked with a permanent marker. Head circumferences differ between individuals, and thus so do the locations of the motor cortex and DLPFC. The motor cortex is located near the middle of the skull, and the DLPFC is closer to the front. Once these locations are determined, an electromagnetic coil is placed against the head, and magnetic pulses are painlessly and noninvasively sent through the skull to stimulate nerve cells in the brain.

After two weeks of administering daily TMS sessions and daily pain and opiate urge assessments, Hanlon’s research team reported a significant difference in effects between the two locations. The motor cortex was significantly more effective at reducing the urge to use opioids and the study participant’s perception of pain both immediately after treatment and during follow-up assessments. Direct magnetic stimulation to the motor cortex led to a 64-70% reduction in pain.

“This is the first study to evaluate a noninvasive therapeutic treatment to help decrease opiate use in chronic pain patients,” said Hanlon. “We have no non-pharmacologic-based treatment options for people, and people are really tired of taking pills.”

As a pilot study, Hanlon and Imperatore’s paper kicks off a new area of research. It represents the first attempt at a randomized comparison of these two potential treatment targets, and it excites Hanlon because it suggests that the motor cortex is an important and influential part of the addiction process.

“Not only pain but also the urge to use, in this case, opiates,” she said. “It’s a whole new window of opportunity that we can explore.”

Imperatore will be leading future studies to expand the knowledge on this topic, as this pilot study used a small sample size. MUSC will be conducting studies alongside Wake Forest School of Medicine and hopes to offer this new therapeutic option to patients suffering from chronic pain and addiction in the near future.