A survey completed using a combination of ground and space-based telescopes yielded a treasure trove of previously unknown globular clusters – old, dense groups of thousands of stars that all formed at the same time – in the outer regions of the elliptical galaxy Centaurus A. The work presents a significant advance in understanding the architecture and cosmological history of this galaxy and offers new insights into galaxy formation in general and the distribution of dark matter in the universe. 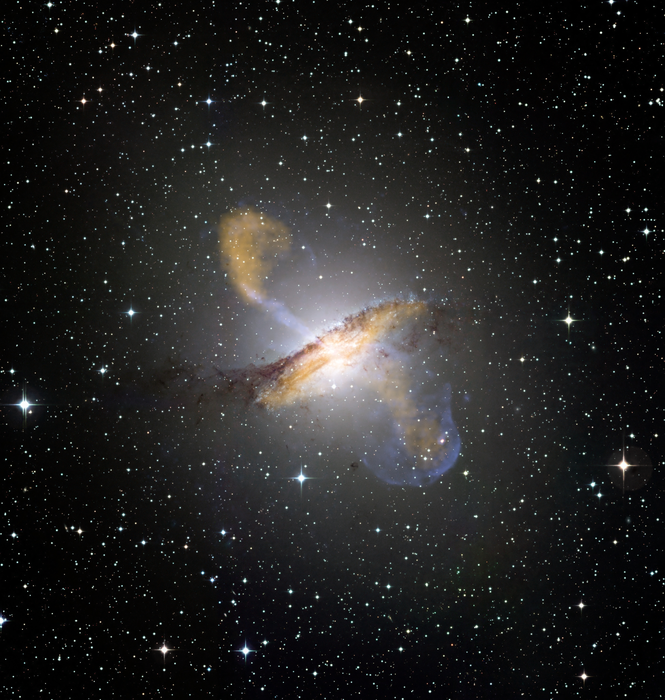 A survey completed using a combination of ground and space-based telescopes yielded a treasure trove of previously unknown globular clusters – old, dense groups of thousands of stars that all formed at the same time – in the outer regions of the elliptical galaxy Centaurus A. The work presents a significant advance in understanding the architecture and cosmological history of this galaxy and offers new insights into galaxy formation in general and the distribution of dark matter in the universe.

Allison Hughes, a doctoral student in the University of Arizona Department of Astronomy and Steward Observatory, is the first author of a peer-reviewed paper summarizing the findings that was published in the Astrophysical Journal in June. She will present the study during a press briefing at the 239th Meeting of the Astronomical Society of America Tuesday at 2:15 p.m. (MST). The briefing will be streamed via Zoom.

Centaurus A, also known as NGC 5128, is a visually stunning, elliptical galaxy featuring a relativistic jet spewing from a supermassive black hole at its center and spectacular streams of scattered stars left behind by past collisions and mergers with smaller galaxies orbiting Centaurus A. Located in the constellation Centaurus, 13 million light-years from Earth, Centaurus A is too far away to allow astronomers to see individual stars, but star clusters can be identified as such and used as “fossil evidence” of the galaxy’s tumultuous evolution.

Hughes and her colleagues present a new catalog of approximately 40,000 globular cluster candidates in Centaurus A, recommending follow-up observations focused on a set of 1,900 that are most likely to be true globular clusters. The researchers surveyed globular cluster candidates out to a projected radius of approximately 150 kiloparsecs, nearly half a million light-years from the galaxy’s center. The data combines observations from the following sources: the Panoramic Imaging Survey of Centaurus and Sculptor, or PISCeS; Gaia, a space observatory of the European Space Agency, and the NOAO Source Catalog, which combines publicly accessible images from telescopes in both hemispheres covering nearly the entire sky.

.Centaurus A has been a leading target for extragalactic globular cluster studies due to its richness and proximity to Earth, but the majority of studies have focused on the inner 40 kiloparsecs (about 130,500 light-years) of the galaxy, Hughes explained, leaving the outer reaches of the galaxy largely unexplored. Ranking the candidates based on the likelihood that they are true globular clusters, the team found that approximately 1,900 are highly likely to be confirmed as such and should be the highest priority for follow-up spectroscopic confirmation.

“We’re using the Gaia satellite, which mostly focuses on surveys within our own galaxy, the Milky Way, in a new way in that we link up its observations with telescopes on the ground, in this case the Magellan Clay telescope in Chile and the Anglo-Australian Telescope in Australia.”

Centaurus A’s structure tells astronomers that it went through several major mergers with other galaxies, leading to its glob-like appearance with river-like regions that have many more stars than the surrounding areas, Hughes said. Providing the closest example of an elliptical galaxy, Centaurus A offers astronomers an opportunity to study up close a galaxy that is very unlike our own. The Milky Way, as well as its closest neighbor, the Andromeda Galaxy, are both spiral galaxies. With their familiar, pinwheel-like appearance, spiral galaxies may seem like the “typical” galaxy, but it turns out that their less orderly elliptical cousins outnumber them in the cosmos.

“Centaurus A may look like an odd outlier, but that’s only because we can get close enough to see its nitty gritty details,” Hughes said. “More likely than not, both elliptical and spiral galaxies like the Milky Way are messier than we realize as soon as we look a little bit deeper than just on the surface.”

Globular clusters serve as evidence of processes that happened a long time ago, Hughes said.

“For example, if you see a line of these globular clusters that all have similar metallicity (chemical composition) and move with similar radial velocity, we know they must have come from the same dwarf galaxy or some similar object that collided with Centaurus A and is now in the process of being assimilated.”

Star clusters form from dense patches of gas in the interstellar medium. Almost every galaxy has globular clusters, including the Milky Way, which boasts around 150 of them, but most stars are not arranged in such clumps. By studying globular clusters, astronomers can gather clues about the galaxy hosting them, such as its mass, its history of interactions with nearby galaxies and even the distribution of dark matter within, according to Hughes.

“Globular clusters are interesting because they can be used as tracers of structures and processes in other galaxies where we can’t resolve individual stars,” Hughes said. “They hold on to chemical signatures, such as the elemental composition of their individual stars, so they tell us something about the environment in which they formed.”

The researchers specifically looked for globular clusters far from the center of the galaxy because Centaurus A’s substructure hints at a large, undiscovered population of such clusters, Hughes explained. Previous observations had found just under 600 clusters in the more central regions, but the outer regions of the galaxy had remained largely uncharted.

“We looked farther out and discovered more than 100 new clusters already, and most likely there are more, because we haven’t even finished processing the data,” Hughes said.

“We can then use that data to reconstruct the architecture and movements in that galaxy, and also figure out its mass,” Hughes said. “From that we can eventually subtract all its stars and see what’s left – that invisible mass must be its dark matter.”

Hughes will present her main findings and implications of the research as part of a press briefing titled “Stellar Nurseries, Clusters & Streams” Tuesday at 2:15 p.m. (MST). The briefing will be streamed via Zoom.

Despite the cancelation of the 239th meeting of the AAS, the press program will go forward. Press briefings will be hosted virtually via Zoom; no registration is required. The full briefing schedule is available on the AAS Meeting website. Each session has a unique Zoom link.

In addition, the press briefings will be livestreamed to the AAS Press Office YouTube channel. Journalists who wish to ask questions will need to participate in the conferences via Zoom.

NGC 5128 Globular Cluster Candidates Out to 150 kpc: A Comprehensive Catalog from Gaia and Ground-based Data