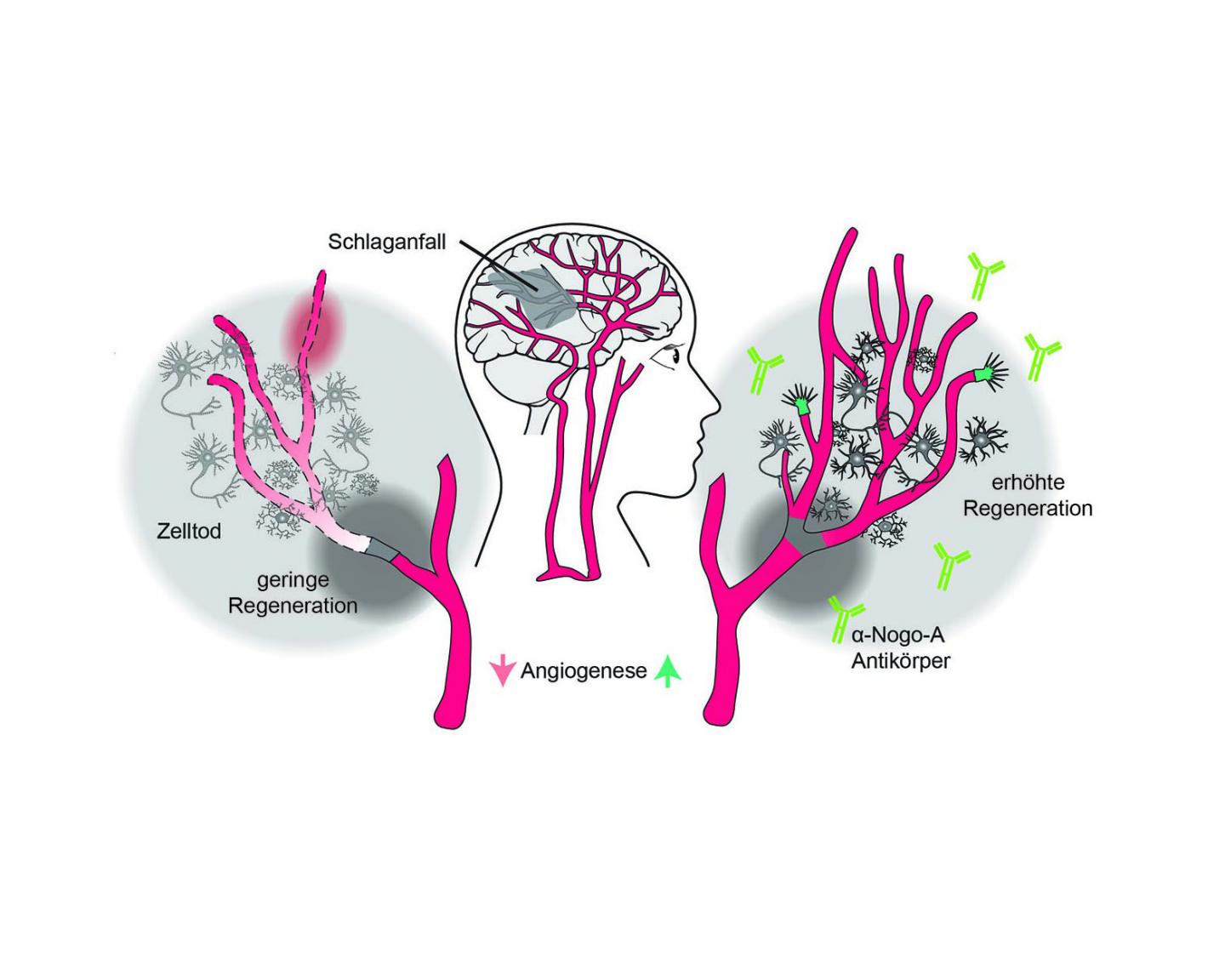 Following a stroke, antibodies that inhibit the signaling molecule Nogo-A can help repair blood vessels in the affected brain regions. This also promotes the regaining of motor functions, researchers at the University of Zurich have shown in a mouse model. The study opens up new avenues for treatment.

Each year, around 16,000 people in Switzerland and 15 million people worldwide suffer a stroke. Two thirds of those affected die or remain in permanent need of care due to the brain’s limited capacity to regenerate damaged tissue and neural circuits. At present, despite intensive research efforts only few medical therapy options are available that reduce the serious consequences after cerebral stroke.

A promising new approach to promote the recovery of physiological functions aims to repair the system of blood vessels in the affected brain regions. The system supplies the injured tissue with oxygen and key nutrients. In people who have suffered a stroke, this repair process is inhibited by a number of mechanisms. A few years ago, the research group of UZH Professor Martin Schwab used a mouse model to, among other things, show that the signaling molecule Nogo-A not only reduces the growth of nerve fibers, but also regulates blood vessel sprouting in the brain and could thus also inhibit their repair.

In a new study with mice, the researchers genetically deactivated the Nogo-A molecule or one of its corresponding receptors S1PR2. The blood vessels in these mice showed improved regenerative capacity, and they recovered affected motor skills better than those of the mice in the control group. These findings were reproduced in a therapeutic approach using anti-Nogo-A antibodies in mice following a stroke, which too led to the re-formation of a robust and functional vascular network around the affected brain regions. “The nervous system of the treated mice showed better recovery and their motor functions were less affected, which we ascribe to vascular regeneration,” says first author and UZH neuroscientist Ruslan Rust.

Previous experimental efforts to enhance vessel growth have almost exclusively focused on vascular growth factor supplementation, an approach that has been shown to be clinically unviable due to adverse side effects such as increased risk of hemorrhage. “Our findings provide a promising alternative approach to treating stroke patients,” says Rust, “not least since anti-Nogo-A antibodies are already being used in clinical testing for spinal cord injuries.”

Tropical soil disturbance could be hidden source of CO2

Earlier diagnosis and treatment assessment of tuberculosis achieved with pet/ct

New target found for disease of the heart’s smallest blood…