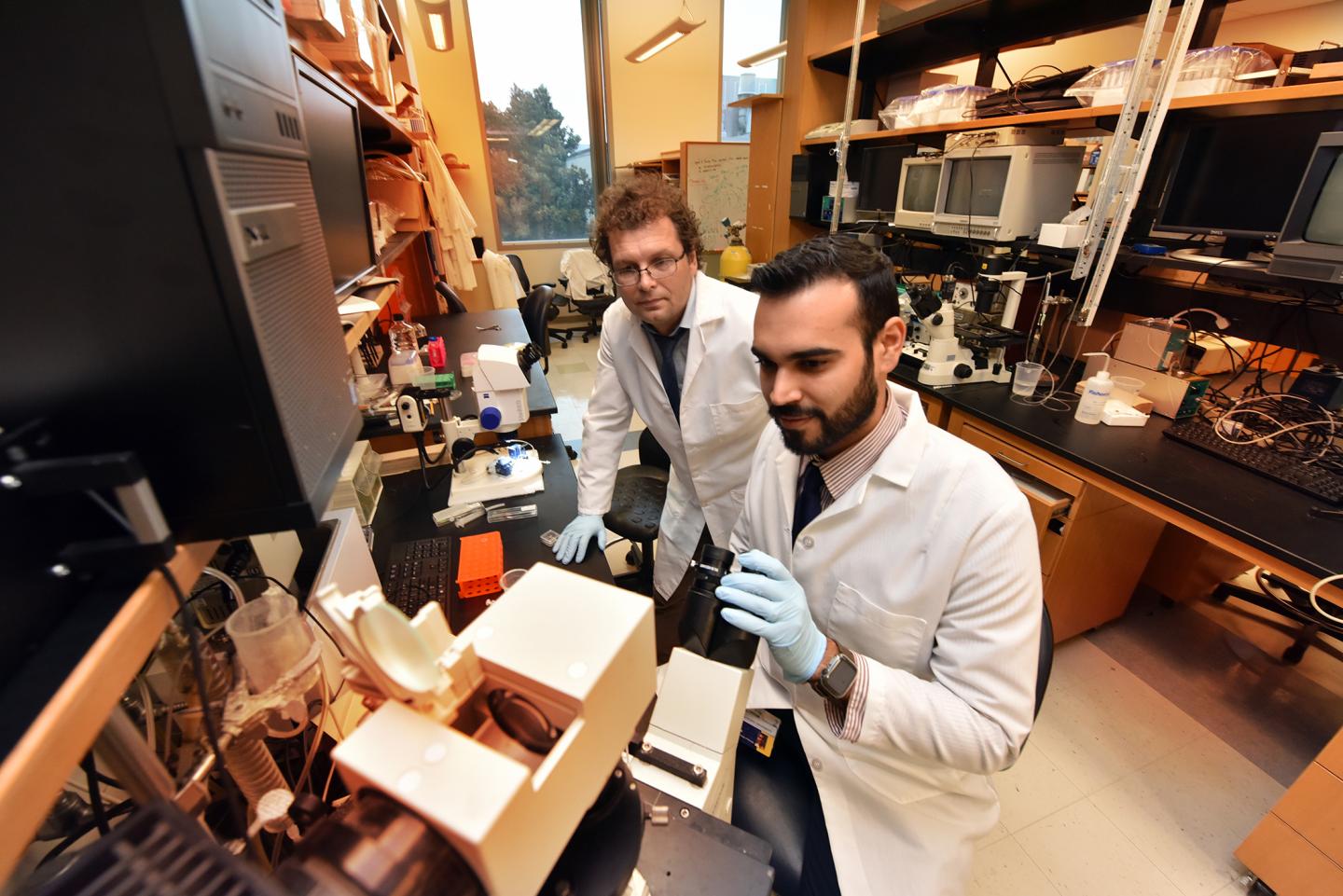 AUGUSTA, Ga. (Aug. 12, 2019) – When we race walk, for example, part of our healthy heart muscle may want a little more blood and oxygen, so our tiniest blood vessels send a message upstream to the larger vessels to send more.

Now researchers at the Medical College of Georgia at Augusta University have found that a chemical in our bodies known to help blood vessels dilate also sends that signal to the larger blood vessels that more blood is needed.

They’ve also found that in diastolic heart failure, a condition where the left ventricle, the major pumping chamber of the heart, can’t relax enough to fill adequately, the natural inhibitor of that chemical goes up and communication with upstream blood vessels goes down. And, when they bring the inhibitor down, it reduces the heart dysfunction, they report in the journal Circulation: Heart Failure.

“What we are talking about here even many cardiologists cannot see,” Dr. Zsolt Bagi, vascular biologist in the MCG Department of Physiology, says of the microvasculature that pervades our heart muscle, aligning one on one with each individual heart cell.

One of the problems is there is not much that can be done to treat this type of tiny blood vessel disease if it is found, says Bagi, the study’s corresponding author.

But Bagi and MD/PhD student Alec Davila think they have found more reason to look.

Like the larger coronary artery problems most of us probably think of when we think of heart disease, factors like high cholesterol, high blood pressure and smoking, can also produce disease in these tiny blood vessels so the essential communication about more blood doesn’t happen well and we can end up with heart muscle damage and heart failure.

Microvascular dysfunction is thought to underlie many of the problems associated with diastolic heart failure, but how was an unknown and so is which comes first.

In an obese rat destined to develop diastolic heart failure, and in the blood vessels of patients, the investigators have some of the first evidence that there is a “critical deficit” in the ability to appropriately dilate blood vessels.

They saw that the chemical adenosine, which normally facilitates the dilation, doesn’t work well because levels of its innate inhibitor, adenosine kinase, are increased.

In a healthy state, the two provide balance for each other, but adenosine levels are typically somewhat higher.

If you are healthy, when a portion of your heart needs more blood and oxygen for that walk or to hike up some stairs, adenosine levels go up and adenosine kinase levels decrease, which is good, Davila says.

Now they’ve shown that in their animal model of disease, giving a drug that blocks adenosine kinase boosts the intrinsic adenosine production back where we need it, which is also good, says Bagi.

In both their model and in human microvessels, they found that adding the adenosine kinase inhibitor in turn improved the ability of blood vessels to dilate.

Treatment of the animal model with the inhibitor prevented diastolic dysfunction when started early, and partially reversed the condition when it had already developed, so diastolic function improved and there was less expression of markers of inadequate oxygen for the heart muscle. As a proof of principal, they also tried just directly adding more adenosine, which also restored the ability to dilate.

“The novelty here is that adenosine really amplifies the signal,” says Bagi. The signal for more blood went out in a couple of seconds and the dilation started happening in a couple of more seconds, they say. Bagi and Davila suspect a daily adenosine kinase inhibitor will one day help that happen in patients.

The adenosine kinase inhibitor they used appears to be pretty specific, and is being looked at as well for epilepsy, where levels of adenosine kinase also are high, Bagi says. They doubt an adenosine drug, already used for heart arrhythmias, would work because it’s so short-acting.

While they don’t know exactly what increases adenosine kinase levels in disease, they want to. Possibly chronic inflammation, which plays a role in so many diseases like hypertension, obesity and diabetes — all of which are risk factors for heart disease — has a role in this as well, Davila says.

The issue of which comes first, the diastolic heart failure or microvascular problems, is a hot topic being pursued by several labs, including Bagi’s, who suspects it’s the microvascular disease.

Much like in the brain, the heart’s blood supply starts with larger blood vessels that feed into progressively smaller ones with thinner walls. Ultimately, a blood vessel about the size of a strand of human hair feeds each individual heart cell, or cardiomyocyte. “The microcirculation continuously directs the blood flow where it’s needed,” Bagi says.

He suspects the microcirculation is affected in any type of heart failure, but likely more so in diastolic heart failure. This type is more chronic and insidious, says Bagi, and patients are largely unaware it’s happening until they start having trouble with usual activities like walking up the stairs.

Rather than the classic chest pain most of us think of with heart problems,
it’s symptoms can include the also classic shortness of breath with exercise but also waking up at night with breathing problems as well as coughing and wheezing, fatigue and swelling of the feet, ankles, legs and abdomen.

Systolic heart failure, where the major pumping chamber of the heart can’t contract adequately to move blood out to the body, is likely what many of us think of as heart failure and it often follows heart attack(s), which have damaged the heart muscle.

With diastolic heart failure, the main pumping chamber still pumps out okay, but left untreated the ventricle may eventually have trouble with both relaxing and filling, Bagi says. He notes that it actually takes more energy for the pumping chamber to relax than contract. “It’s never a passive thing.”

Today there are no targeted therapies to help correct the microvascular disease associated with diastolic heart failure rather general approaches like exercise and possibly drug therapy that target known risks like high cholesterol, Bagi says, noting again that microvascular function is tough to measure, which has made it tough to find drugs that target it.

The research was funded by National Institute of Aging and American Heart Association grants to Bagi and the Ruth L. Kirschstein National Research Service Award Individual Predoctoral Fellowship to Promote Diversity in Health-Related Research from the National Heart, Lung and Blood Institute awarded to Davila.

Scienmag Jun 17, 2019
Credit: Alejandra Narváez Vallejo How can the impacts of climate change on agriculture in West Africa be…